Hey everyone, Drew back here. Just when I post my mail, I get more mail! While it's a pain to post, I still absolutely love to find yellow bubble mailers in the mailbox! Ok, so today, I'm gonna show you some stuff I got from Jeremy (no one's going to read this blog), a package from Mike (BA Benny's Baseball Card Buffet), and one eBay purchase to close it out. We'll start with what Jeremy sent me. 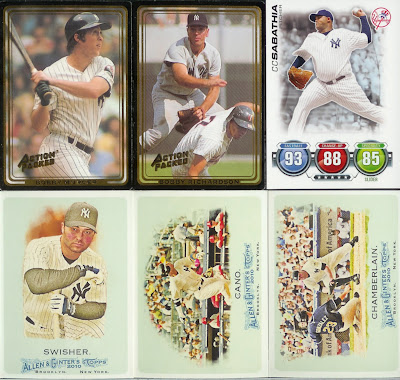 First off some Yankees, including 2 of the Action Packed Yankees of Bobby Murcer and Bobby Richardson. A CC Topps Attax, and 3 2010 Allen & Ginters, 2 for the Yankees collection (Swisher, Joba) and one for the set (Cano). 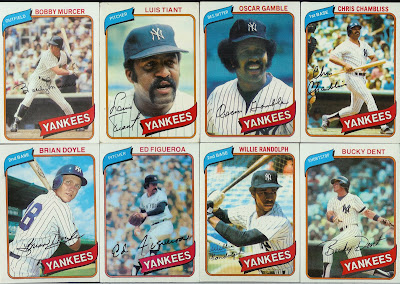 This is 8 of about 15 1980 Topps cards that Jeremy sent. I thought I had a ton of this set but I actually needed around three quarters of them. This is a nice set, someday I may attempt to collect this whole set. 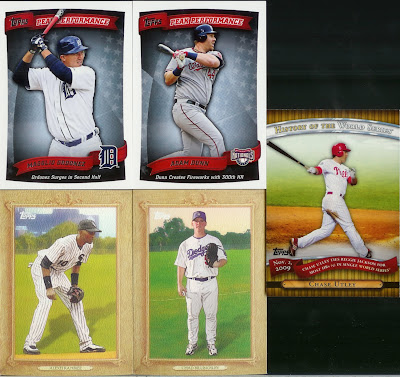 Next are some cards I needed for my set. William sent me the Billingsley, so it's for trade for another one I need for the set. I just don't wanna look at the Utley though, even though we won, he killed us in that series. 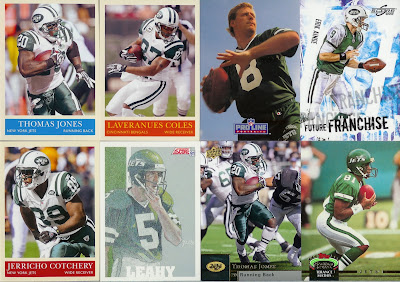 He included a few Jets too, which was cool, can never have enough Jets, I don't have a ton. The Pat Leahy card is really cool and I like the look of the Erik Ainge Future Franchise card. Too bad Score didn't know Mark Sanchez would soon join the team!

Lastly, 3 Shonn Greene cards. I'm really excited to see how this guy does this year, I have a feeling LT won't get much playing time! 3 needed rookies to add to my mini Greene collection, sweet. Thanks so much Jeremy, your cards are going out tomorrow! 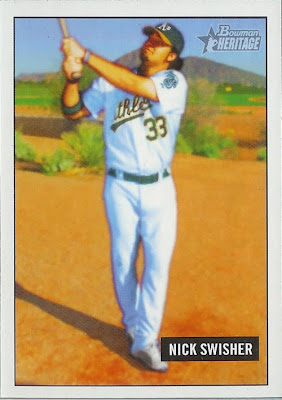 From BA Benny, I got this 2005 Bowman Heritage Nick Swisher rookie card, which is a nice addition to the PC! I gotta say though, it's a pretty ugly looking card, the pic is blurry, but whatever, still any Swisher I need is a good Swisher! 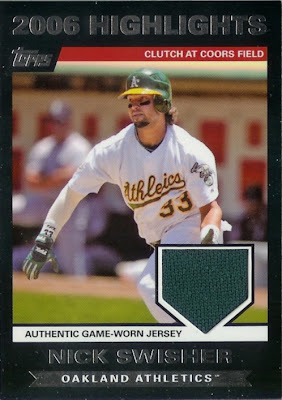 In another 1 for 1 trade with him, I landed this 2007 Topps Nick Swisher jersey card. The swatch is green, which adds to the niceness of the card, I'm getting really sick of white/gray swatches all the time. But yeah, another sick Swisher to add. Thanks Mike!!! 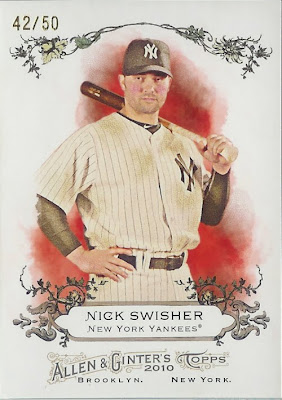 And lastly, I picked up this ripped rip card of Nick Swisher from 2010 Allen & Ginter off eBay for $15 shipped. Not a terrible price, wished it was lower, but I figured, it's only numbered to 50, 3/4 of these rips that will land on eBay are going to be unripped, selling for $75 plus. Only a few ripped versions will show up, so I figured the earlier the better. The seller ripped off the ENTIRE back of the card though, so it looks pretty horrible. I did a nice job with my David Ortiz rip card, it stayed in nice shape after the rip and I didn't have to tear off the back of the card. It kinda sucks but what can you do. Nice card to own.

Thanks again everyone, and See Ya!
Posted by Drew at 7:16 PM