A Hawk Swooped Into My Collection

Hey everyone, Drew back here, after a long morning of doing chores, mowing the lawn, I was surprised with a nice little eBay package. I bought this after being outbid with 1 second left on a Nick Swisher patch card, so I at least finished my night on a good note. I know a few of you guys will be jealous of me, and sorry it's not going anywhere. 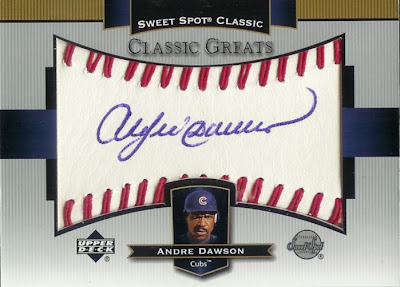 An Andre Dawson autograph! Now this, is how Upper Deck should've done Sweet Spot while they had a license in 2007/2008/2009, not really the design but the pen selection, baseball feel, that kind of stuff, because this is 4 years older than those badly faded 2007 cards, and the auto is most definitely still in tact. This was about $15, not that bad for the price, while I was watching other Dawson autos soar up to at least $20 at the most $30.

Dawson, as you all know, was inducted into the Hall of Fame last year, with 2774 hits, 438 home runs, 1591 RBI, and a lifetime batting average of .279. But, the stats were not Andre's game. Even though I never got to see him play, he was a scary player to face, a monster at the plate in the game's biggest situations. A former Rookie of the Year and MVP, Dawson was arguably one of the top players of the 80's. I'm glad to own this card!

Let me know what you think of the card in the comments below. See Ya!
Posted by Drew at 3:08 PM