The Show Recap Begins (Part I)

Hey everyone, Drew back here. Yesterday we went down to White Plains for the annual East Coast National, one of the bigger card shows in the country! A nice full lineup was there waiting for us, as Grandpa Roy, Dad, Mike, and I entered the doors. Mike will have some guest commentary of his own to come and we'll have plenty of coverage of what I bought and the stories from the great day that was August 22nd, 2010. Let's get started!

9:45 AM
Dad dropped us all off by the front of the Convention Center in White Plains, while it was a dreary rainy day outside. Fortunately, it was a beautiful day inside! On the walk over, there, sitting in a puddle, was a 1979 Eddie Murray card, in a penny sleeve and soaking wet. Mike took the card and kept it, and somehow the sleeve prevented the card from future damage, and it is now in almost perfect condition! What a cool way to start the day!

Coming in to the building, with a short line ahead of us (we like to get there early), we got our tickets, and supplies for the autograph guests. Of course as usual, JP's Sports and Rock Solid Promotions hosted the show, and they gave each of the first few people that bought tickets a Sports Collectors Monthly magazine, which was cool. A guy stood outside of the show room, next to the 8x10 pictures and baseballs to order, with a beautiful painting of Bernie Williams. He said he was a new artist and he was going to have Bernie sign his painting and auction it off to charity. He gave us a card with the painting on it, which was pretty cool.

10:00 AM
Now that we're ready, we entered the room. As usual, that first breath of fresh air in the room that is all things sports cards felt extremely good. Over 450 tables were waiting for my precious wallet to drop money on them, which is a great feeling. This time rather than showing each card by groups I'll go in order with a storyline behind them all. We looked at the tables of the cards in which we knew we couldn't afford, the 53 Mantles, Mays, Williams, you know, those cards, and we all oooed and aaaahed.

We found a seller that sold only 8x10 photos, and he was pretty cool. We looked through plenty of cool pictures for sale, non authenticated but they looked real. There was some that I liked, Joe Klecko, Don Maynard, Bob Feller, and a few more. Mike liked a few Giants guys, Chris Canty, and a Super Bowl picture signed by a few Giants players, the best being Kevin Dockery. When we saw this special though, I jumped out of my pants almost! For $15, we could get a signed picture of Phil Rizzuto! It wasn't authenticated, but with pictures of the seller with Phil all over the place made it a great buy. He had a few, so Mike got one too. 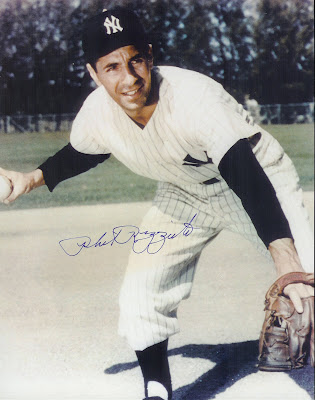 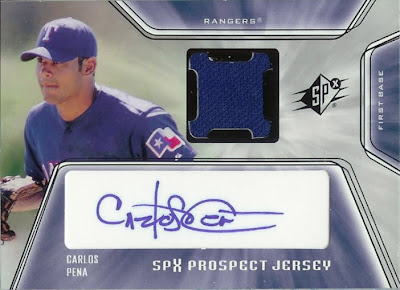 I didn't have an auto of Carlos Pena previously, so I thought it would be a nice pickup. It's a rookie card jersey auto from 2001 SPX. Carlos is having a down year batting average wise, but is always a tough power threat for the Yankees to face.

10:30 AM
I picked up a few minor cards I needed for sets, and some future TTM cards, and got some decent deals along the way. I ended up buying one more card before the first signer at 11:00, after looking around for a while. 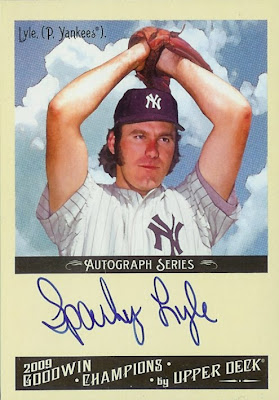 This is my second auto of Sparky Lyle now, and it's a really nice one too. At $10, I thought it was a good enough price to do it. It's from 2009 Goodwin Champions, and it's nice and on card. I think I'm starting a trend of buying on card autos, unless it's a Topps Tribute or Bowman Sterling. You'll see why I think so as the day rolls on.

Before we met the first guest, we entered in the first door prize. Last time we got extremely lucky and each of the 3 of us won something. Each prize today was for a Willie Mays autograph. This first had autos of Bobby and Barry Bonds and Mays on it. We didn't win.

11:00 AM
Now Grandpa Roy and I are in a waiting room, waiting to meet the first autograph guest of the day. They called us a little at a time by the number on our tickets. Our number I believe was around the early to mid forties. The line took forever, and eventually we got into the room where he was signing. I got out all my equipment, including baseballs to get signed for William of foul bunt, who sent me money and the baseballs to get signed because he really wanted an auto of him. Dad and Mike actually showed up a little before we met him, and dad helped out with pictures and stuff. Well, I gave Grandpa Roy the baseballs for him to get signed, and as this player took his time to sign, they had an in depth conversation about the weak Pirates teams during his playing days. This was Ralph Kiner he was talking to! Ralph took hours to sign, but he has a great signature and was a very nice guy. Grandpa Roy told me afterwards that he'll always cherish the moments he got to talk to Mr. Kiner. 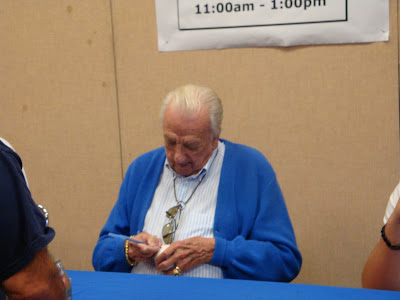 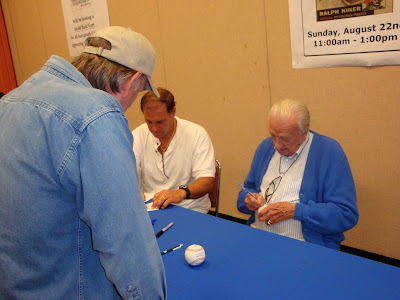 Now that the baseballs were finished, it was my turn to meet Mr. Kiner. I said "Hello, how are you", and he responded "Good, you?". I said I was doing well, and then I told him I made the card in his honor, and he said thank you, it looks very nice, around those lines. I thanked him and said goodbye. What can I say, I shy up in those moments! I got a picture with Mr. Kiner, and the card looks great signed! 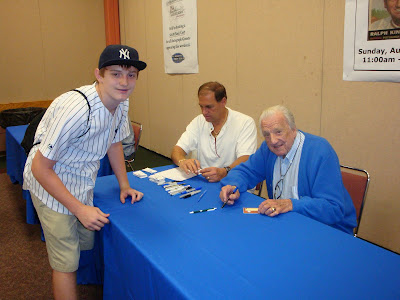 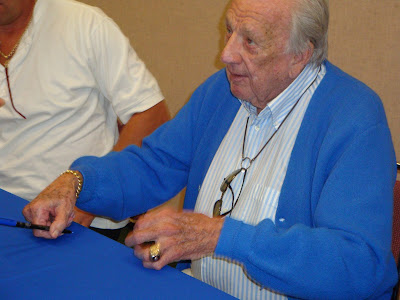 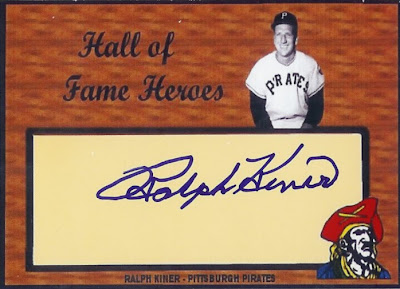 12:00 PM
Well, it took a while to get Mr. Kiner, but it was well worth it. Coming up on 12:00, we decided to get some lunch at Nathans, the only food place in the building. My Philly Cheese steak was pretty good I must say, it got me full and more awake (maybe that was the soda). After lunch, we got in a bunch of lines and bought much more! We'll have all that and more to come in the next post!