Hey guys, Drew back here. Not much of a shopper typically, but when it comes to cards, I go crazy. You can tell this by the amount of cards in this purchase. Well, I'll let you see them now, let's continue with the show review.

PART 3:
FINAL PURCHASES (FOR ME)

1:45 PM
Around 1:45, we wrapped up our meetings with players and started really shopping. As you saw before, I didn't attack the way I always did, yet. Now that the show was a few days ago, I'm starting to forget what order I bought these in, so I'll just give you some rapid fire pictures and stories about all the rest of my buys. 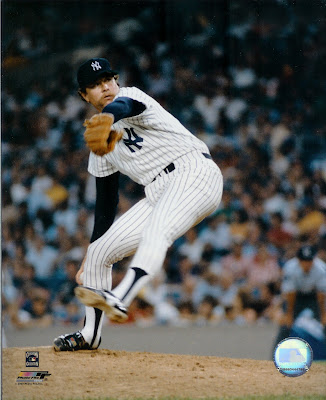 First was this Goose Gossage 8x10. You all know what I'm gonna do with this, but just in case I'll explain. I'm sending it through the mail to Mr. Gossage with a $10 bill to try to get it signed, to get me 8x10 Yankees autos of: Yogi Berra, Whitey Ford, Roy White, Chris Chambliss, Cecil Fielder, Dwight Gooden, Phil Rizzuto, Goose, and Brian Bruney. (yep, we all know who doesn't deserve to be in this group) So, wish me luck on that. 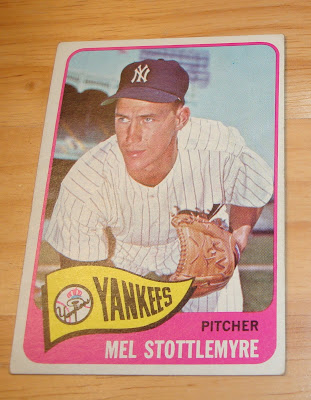 This was actually my last pickup of the day, bought it for $13 or so, a 1965 Topps Mel Stottlemyre! I love picking up cards of players that I've met, and I saw this, it was in nice shape, so I got it! 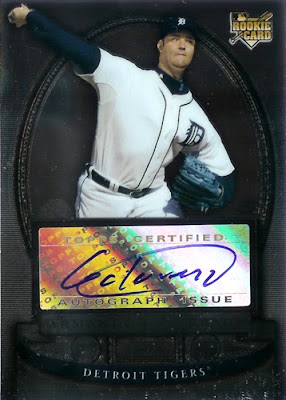 This scanned horribly, should've done a picture of it, but anyways, for $10, a 2008 Bowman Sterling Armando Galarraga auto. Compared to other prices, this is a nice price, and I know I could've done better with these $10, but Bowman Sterling has always looked nice, plus I admire the fact that Armando handled the situation he was placed in so well. I feel so bad for the guy, this was the least I could do. 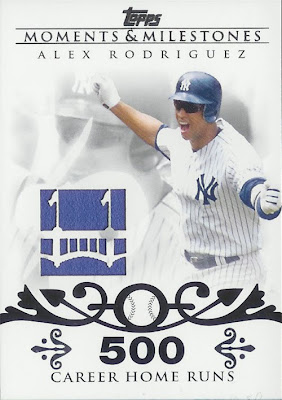 I think this was either $5 or $10, a 2008 Topps Moments and Milestones A-Rod Yankee Stadium Wall Relic. I always wanted a big chunk of dirt from the old stadium, call me weird, but I always thought it would be cool to have a piece of Yankee Stadium in my room. Instead, I settled for this nice piece of the home run wall. I think the facade is part of the design of the card, not part of the relic piece itself. I never remember there being a facade on the stadium wall, but still an awesome card nonetheless. 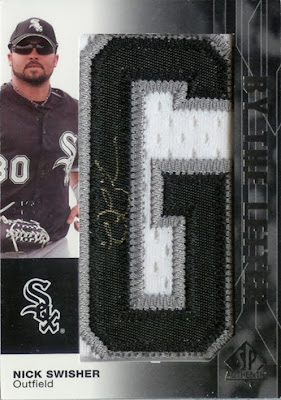 From the never ending 2008 SP Authentic set, a letter "G" auto of Nick Swisher. The G is supposed to spell out Chicago, which is a really dumb concept, but would look nice put together. The auto is pretty hard to see in person, but it's signed in gold and numbered to 75. For $10 or so I thought it was a cool pickup, my 7th Nick Swisher auto in my collection. 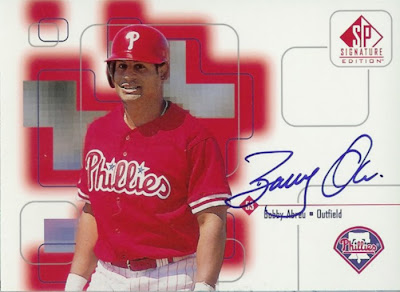 Another $10 pickup, this nice 1999 SP Signature Edition autograph of Bobby Abreu. Abreu missed out on our 2009 World Series run, and went to the Angels, where he did well. This year, however, is not the same Abreu we always saw. He's put together a nice career though, and for the price I felt like I should get one for the collection. 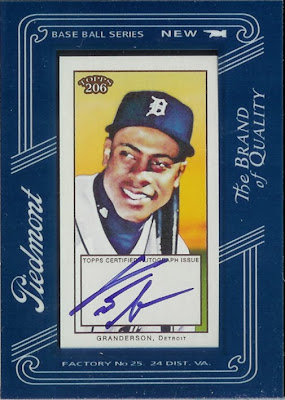 This is a really nice one. From 2009 Topps 206, a Curtis Granderson framed auto. Curtis has been disappointing for the Yankees this year, but he's finally breaking out and should continue for the rest of the year pretty consistently. Kevin Long and Grandy worked on some things and now he's hitting the ball better than ever this year. It was for sale for $20, but I got it for a solid $15. My 2 certified autos of Curtis now are Allen & Ginter and 206, both framed! 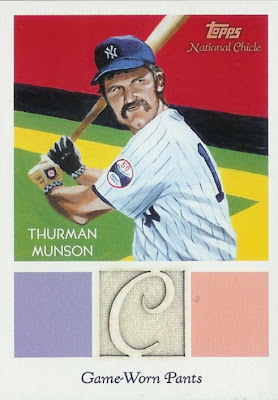 Also for $15, got this beauty from 2010 National Chicle, a Thurman Munson game used card. The painting of Munson is really nice, and the pants piece is nice! Only problem is I can't stand why Topps put the most feminine colors next to the swatches, I mean, really! Pink and purple! Topps guys, paint your daughters rooms these colors, not your cards. Whatever, still an awesome card of the Captain. 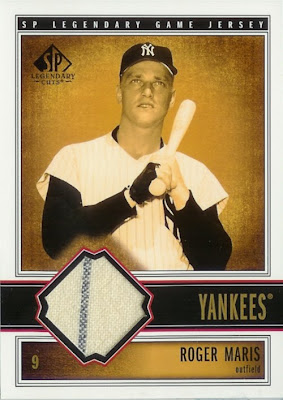 Now for my 2 big boys of the day, both got for $30 each. First is this 2002 UD SP Legendary Cuts game used of Roger Maris! I watched HBO's "61" movie, and I gained a ton of respect for Roger. I never really was a huge fan of his, because I didn't know much about him, and I also preferred The Babe to be the Home Run King. After watching that movie though I give him a ton of credit and I'd love to get more of him. This was a great 1st big card of Roger, with a beautiful pinstripe down the middle. 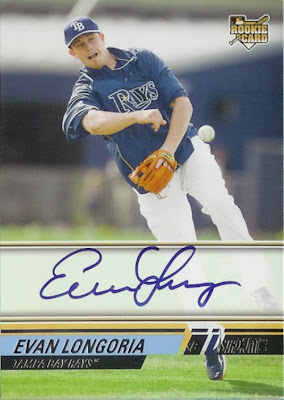 My 2nd to last pickup (bought the Stottlemyre last), and the last card that I bought that I haven't shown yet, a 2008 Stadium Club Evan Longoria RC Autograph! I got this for a steal, it was expensive, but $30 compared to this card on eBay is a crazy steal, the next lowest BIN I saw was $45, ranging up to $75! It's in mint condition, and a RC auto of the guy that beat out A-Rod for the starting spot on the All Star team this year. I bought this mainly because I've wanted a Longoria auto for some time, and when I asked for a price I expected higher, but as soon as he finished saying "$30" I said I'd take it. Evan played 8 games for my local minor league team, the Hudson Valley Renegades, a fresh crop of Rays players, and in those games he had 4 home runs and a few other hits as well! So, I thought I made out well on that one!

What do you think? How did I do? Don't worry, my dad provided even more excitement to the day, and you'll see why in the next post!

By the way, yesterday I received my box of 2010 TriStar OBAK baseball, and I'll be opening it tonight. The box review will come immediately following my card show posts, followed by contests and other maildays!