Hey guys, Drew back here. After a long day of family parties and stuff, time to settle down. I've gotten a ton of autographs the past few days in the mail, plus a few other small things. So.. without further adieu, let's get started! 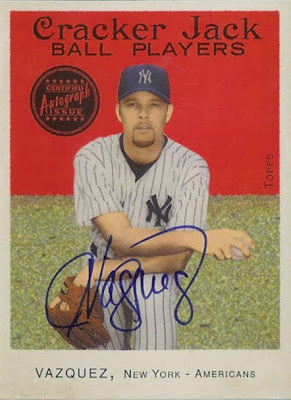 First, I got this card in a deal with Blowout Cards Forum member sportscards1013. It's an on card auto of Javier Vazquez from 2005 Cracker Jack. Javier has had an up and down year, but this guy offered it to me so eventually he got me to take it off his hands. It's a small card, about the size of a 2007 Goudey card. Javier's auto is very nice, and it's a pretty nice card I must say! Thanks! 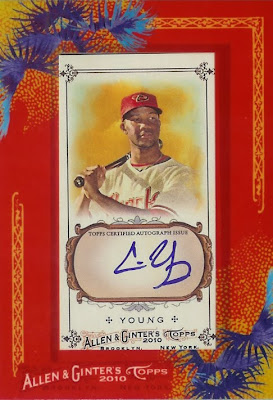 Jim of Sixty Feet Six Inches and I swapped Allen & Ginter autos, him getting my Max Scherzer auto and me getting this Chris Young auto. I kinda figured, they both sell for the same relative price, and Young was an All Star this year, so I gave up Max Scherzer. I may trade this card for another auto in that set I may prefer, but for now I'll hold on to it. 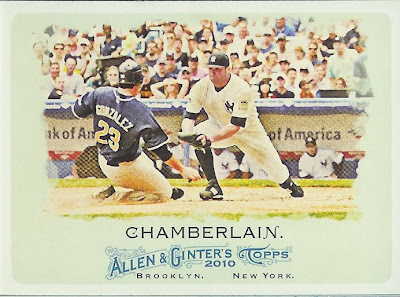 Also, Jim included this card of Joba from Allen & Ginter for my set. Thanks Jim!

Cam from Collectable Cards asked me about the Hunter Pence black bordered parallel from my 08 Masterpieces break, and I took these 3 inserts in exchange for it. I needed all 3 of these, pretty sure the Teixeira is only a retail rack pack thing, and the Jeter is an insert from 2008 Spectrum. The A-Rod is an X Ponential 2 insert from 2008 UD X, which actually had very nice inserts. Thanks Cam! 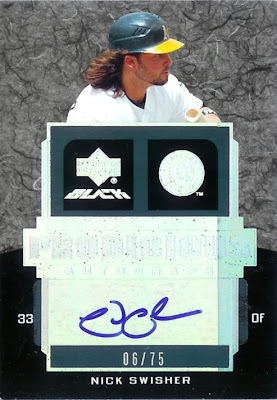 These next 2 I bought on eBay. This one is a 2007 UD Black Nick Swisher Prodicious Auto /75. I got it for about $10 shipped, which seems to be a typical price now for most Swisher autos. I like the card, it has a nice shine, and it's the first UD Black card I own. But one small problem, the card is showing some wear, with a bunch of black dots all over the place. Looks like the shiny part is getting wrecked up. Anybody else have this problem? It's a nice card nonetheless, and it's my 6th Swisher auto I own. 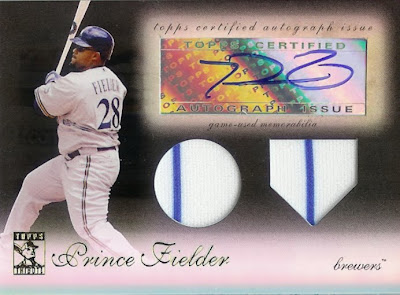 This one was a must have when I saw it. I got this for about $22, a 2009 Topps Tribute Prince Fielder dual jersey auto /50. I've been a big fan of the Fielders ever since I met Prince's papa Cecil at the White Plains show almost a year ago. I drafted Prince with the 7th pick in the 1st round in my league with school friends. He's a heck of a hitter, and one day, I would love to see him make a quick appearance as a Yankee. As for the card, it's really nice, but it doesn't have the crazy shine that the blue, and regular cards from this set have. It's very nice, 2 pinstripes, numbered only 3/50, and he has a decent auto. Overall, I'm happy with the 2 purchases.

Thanks again to everyone involved in the makings of this post, and See Ya!
Posted by Drew at 8:29 PM