Congrats to the Who Dat Nation + New Trivia 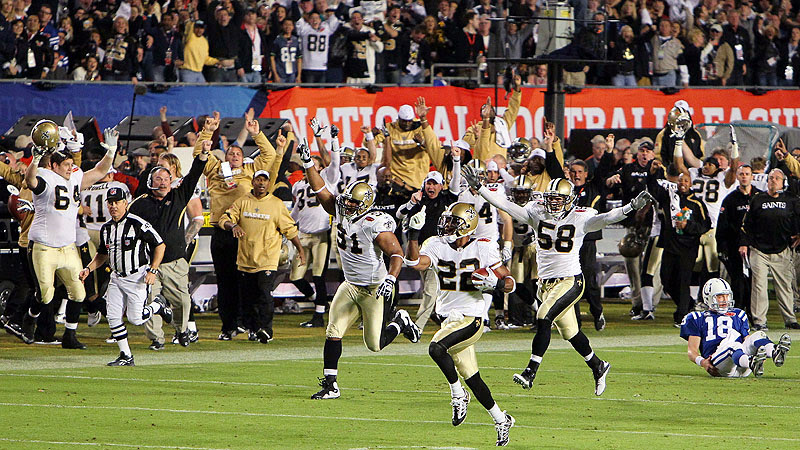 courtesy: ESPN.com
Hey guys, Drew back here, I want to congratulate all the Saints fans for an awesome win yesterday, I'm sure if you're in New Orleans that you haven't been inside your house for a day now so the game will be not the 1st thing on your minds when you guys get done partying a few weeks from now! It was a great game, and I enjoyed watching it! Peyton & Brees just went back and forth until Peyton threw that big pick, one of the biggest plays in Saints history, by Tracy Porter. I was very happy to see the Saints win, especially because of Hurricane Katrina a few years ago and the fact that they've never played in a Super Bowl in franchise history.

The bad parts about the Super Bowl were everything outside of the game itself. The commercials sucked and they've gotten worse every year. The only ones that I thought were decent (but still didn't get a laugh out of me) were the one with the sleepwalking guy and the Brett Favre Hyundai commercial. He very well could be the MVP of the 2020 NFL season, if the NFL exists. The Who also looked plain old old out there, and they certainly put me to sleep.

Getting back to the highlights of the night, Grandpa Roy and I just talked on the phone and we have our first trivia question of the new year for you today, relating to the Super Bowl last night, here is your question:

The New Orleans Saints won the Super Bowl last night as you all know in a miraculous fashion. After a long 44 year drought of no Super Bowl appearances, the 'Aints came out and beat the Colts, 31-17. They became the 9th NFL team to win their 1st Super Bowl game they've appeared in. What are the other 8 teams?

UPDATE: Got them all! Post coming soon! Good job

You guys know the deal, but I'll explain it again for you. Please comment with your guess, only 1 guess per day for each person. Please try your hardest to think of these off the top of your heads, there will be no prize this year, and after a really busy last few months, I'm not sure prizes will be provided to the other 4 people in the Top 5 from last year, which I will need to ask them. Have fun with the question and Good luck!
Posted by Drew at 7:24 PM