Hey guys, Drew back here, with two pretty cool autos I got in recently through the mail. We'll start with the first one, which was a little disappointing, but it's still a nice auto: 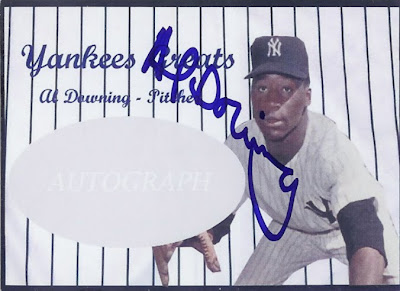 Al Downing signed my custom, and it would have been much nicer if he signed across the autograph section of the card. Nonetheless, it's still cool to have, he's probably too old to notice the circle. But I mean, if he isn't, if you see that spot on a card waiting for your name to be written across it, wouldn't you sign there? Whatever. Still a success, of one of Whitey's pitching buddies for the Yanks in the 60's. He also surrended the 715th home run to Hank Aaron, which isn't a good thing in Al's favor but an interesting fact.

Moving on, to my first ever email through the mail success! In late July, early August-ish, I sent some emails to some basketball coaches and a former football player. Check out my absolutely free prize was:

Vince Papale! Vince took his time to send a picture about the size of a long envelope and inscribed it "To Drew, You Are a Star, Vince Papale, #83"! This is one awesome piece!

Vince didn't have a Hall of Fame career in the NFL most certainly, but he holds a cool record, the oldest player to ever break into the NFL (30) without any college experience! In 1979 he was named "Man of the Year" for his charitable efforts. There's actually a movie made by Disney about him called "Invincible". You guys should check it out, if you haven't heard it about it already, Mark Wahlberg is the starring actor, playing Papale.

So thank you to both Mr. Downing and Mr. Papale, two truly awesome successes! See Ya!
Posted by Drew at 8:38 PM