Hey everyone, Drew back here, starting up school for the week, but I should have some stuff up while I can. Anthony, as you know by now, has done a lot for me, and he's a heck of a guy, and I just wanted to share my latest loot from him. I'd rather help guys I know out selling things than just buying things, if that makes sense. Well, here are the 3 autos I took off his hands this time: 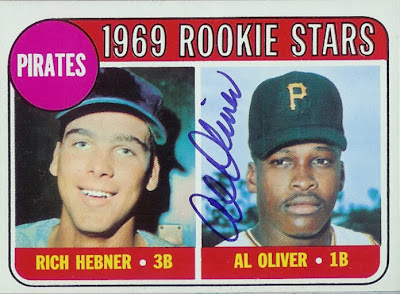 Al Oliver
First, you all know, I'm a fan of Al Oliver's, not only because he was the first player I was able to meet for free in my life, and he was a great guy, but because he was a great player who was very underrated and still is. Anthony obtained this auto the same day I got some autos of him myself, August 16th, 2009. What a great day. The last awesome thing about this is that it's his rookie card, a card I've wanted for a while. I was eventually going to drop $4 or so on one, but now $1 more and it's signed! 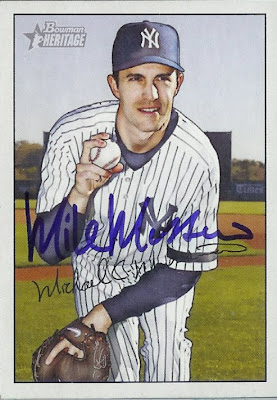 Mike Mussina
One of my favorite Yankees pitchers must've signed for the former Met fan in the past, which is cool. I love this Bowman Heritage card, I even wondered if I should send again to Mike to get it signed. But apparently he hasn't been signing much lately. Which is a shame, since he was a great signer. I hope he makes the Hall of Fame, I really do, he was an incredible pitcher in his prime for sure, and even in his final season, winning 20 games for the first and last time! 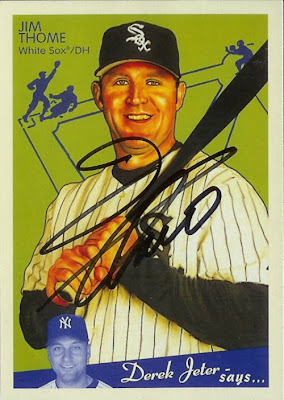 Jim Thome
Okay, I don't know how the heck Anthony got Thome back TTM, because as far as I know, I thought he never signed! Well, his auto sure is sloppy, but for the price I paid, a near 600 home run guy, totally worth it.

Thanks again Anthony, you're an awesome dude! Please everybody help him clear out his TTM auto collection, I guarantee it's all authentic, from TTM's, and there's some great stuff left to take, for a very low price! I paid $10 for this lot! See Ya!
Posted by Drew at 8:00 AM