Hey guys, Drew back here! To go along with my recent eBay addition, a Paul Goldschmidt Five Star on card autograph, I decided to pick up an autograph of who I believe is the best current player on the Cubs roster. Kris Bryant has loads of talent, and I feel like we'll be spending the significant future admiring his play. But in this case, I wanted to show a little love for someone who is doing big things right now, Anthony Rizzo. 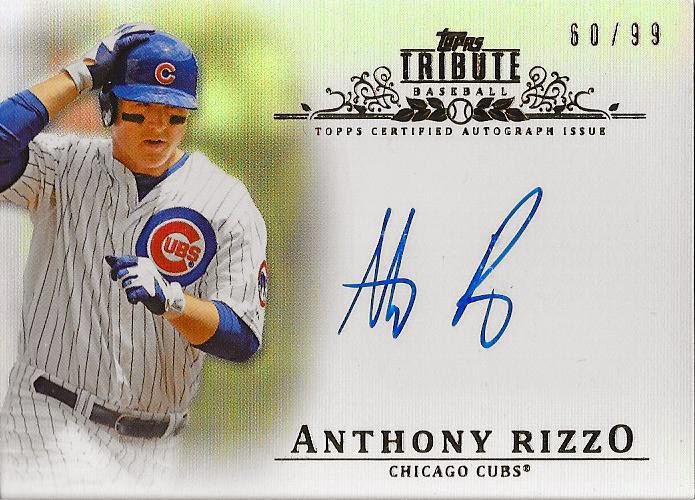 Out of 2013 Topps Tribute, I found a gorgeous on card autograph numbered 60 of 99 of the Cubs young slugger. Many people have turned their focus on Jorge Soler, Kris Bryant, and Addison Russell for good reason, but Rizzo is often the forgotten man on what is becoming one of the most exciting lineups to watch in all of baseball. Last year, Anthony clubbed a personal high 32 home runs while batting .286 and driving in 78 runs. He's off to a great start in 2015, and looks to be one of the better players for the foreseeable future in baseball. If you haven't heard his story, in which he overcame Hodgkins Lymphona several years ago, I highly recommend you check out this piece MLB Network ran about him over the offseason.

I bought this card for a little over $10 shipped on eBay in my recent attempt to catch up on adding some of the better autographs I've been missing. Rizzo doesn't have the best penmanship by any means, but his performance makes up for it. I also was able to add several others through Check Out My Collectibles, but there's one more card I'm saving up to buy with store credit once I sell a few more cheap cards (please feel free to help a friend out and check out my store, thanks)!

Who's your favorite player to watch on the Cubs? I wouldn't say they're off to the World Series this year, but I'm not ruling them out as a potential playoff team for years to come. Whatever the case may be, it will be fun to watch.