Hey guys, Drew back here! This week's edition of my new program, "Ten for Tuesday", features my hand crafted list of who I believe have the 10 nicest signatures in all of Major League Baseball today. The art of the signature has been lost in an era of constant autograph signings and requests, but there are still some players who appear to take pride in how they write their name for fans. We certainly appreciate the extra few seconds players may take to give us a beautiful signature, and with the ten players I am about to reveal, they almost always take that route rather than scribbling something illegible. As you may recall if you have been following this blog for a long time, I ran a "Worst Autograph Bracket" about five years ago, and former pitcher Jason Jennings faced off against running back Vernand Morency in the final round.

So with this list I have excluded every single baseball player who is not currently active, and I veered outside of discussing prospects either because it would only make the list more difficult to compile. I chose players who have had their share of MLB experience, even if they aren't all currently at the top of their game. Elite players did not receive any kind of boost on the list, as this is simply about their penmanship. With all of the qualifications out of the way, let's get started. 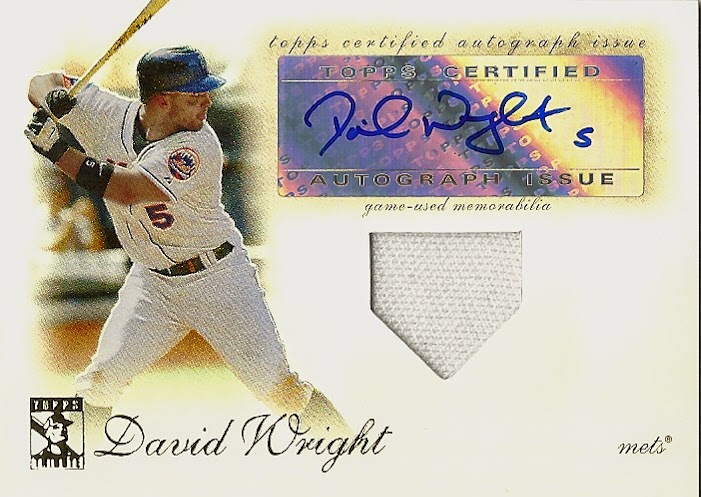 
Miggy's autograph is fitting to the way he hits the ball. The constant vertical strokes makes the signature violent, and as we all saw this past weekend; he sure can crush the ball. Cabrera is again one of the most popular players in the game, and he still makes his signature something fun to look at. I love how he writes his C in Cabrera in particular, but the whole thing flows in a somewhat chaotic way.


Torii Hunter is the first of Harmon Killebrew's proteges to make this list. If you've never read about Killebrew's influence on young Twins players to sign their autograph with pride, I highly suggest you do. Hunter has resulted with a fun autograph that fits his personality very well. I really like the pizzazz in the signature, and that you can almost picture a smiley face at the end of Torii (respect to Tug McGraw). Maybe he could pass down the lesson he learned to Twins top prospects Miguel Sano and Byron Buxton. 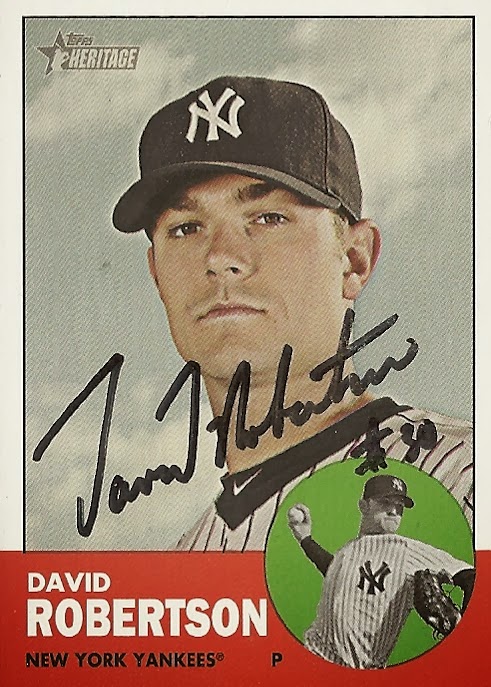 While researching for this post, I came across a great article written around this time last year from the New York Times in which Robertson credits his grandmother for his signature being his full name in comparison to "DRob". Robby has had an underrated career thus far, and I had the pleasure of meeting him a few years ago while he was arguably the best set up man in baseball. I will take any autograph that features every single letter, and the way he signs his "D" in David is pretty unique to me.


Jackie Bradley Jr. gets a lot of credit for the way he signs his cards, however, he gets a bit of a kick in these rankings because he signs most baseballs simply "JBJ". The difference between he and the following 6 players is the difference in signatures when signing different items, and frankly, the baseball signatures would be nowhere close to this list. Justin Upton was another player who signs cards and flats beautifully but has relatively bland signed baseballs, and he was kept completely off this list in result. Bradley is currently in Triple-A for the Red Sox due to their overcrowded outfield, and I hope he gets traded so we can see if he'll ever reach his full potential. 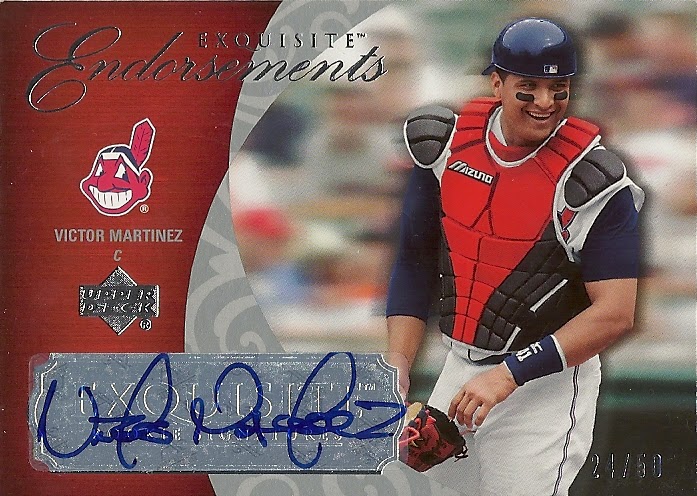 It almost feels like people overlook Victor Martinez in autograph discussions, and I'm really not sure why that is. V-Mart sports a fancy, full signature that ranks among the very best in baseball today. He enjoyed a career year in 2014 and looks to repeat this year, although he isn't getting any younger. I traded a Hakeem Nicks autograph to my friend for the card above a few years ago and it turned out to be so worth it. 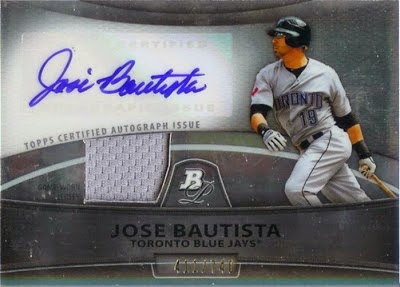 Jose Bautista seems like an awesome guy. One of my biggest blog regrets was starting a one and done blog feature a few years ago called "Juice, Fluke, or Truth", in which I questioned the legitimacy of his 54 home run 2010 campaign. It is now 2015, and "Joey Bats" has not failed a drug test or been proven guilty of any banned substances. While the power in Toronto has been suspicious in recent years, I'm now implementing the innocent until proven guilty mentality with him and several others. He is now one of my favorite all around players in baseball, and he follows both my regular Twitter and blog Twitter, which I find completely awesome! As for his ink, Jose provides fans with every single letter, slanted and angled with a grace that does not line up with the way he hits the ball. He is one of the most dangerous sluggers in baseball, and he has a beautiful autograph. Well done, Jose; well done. 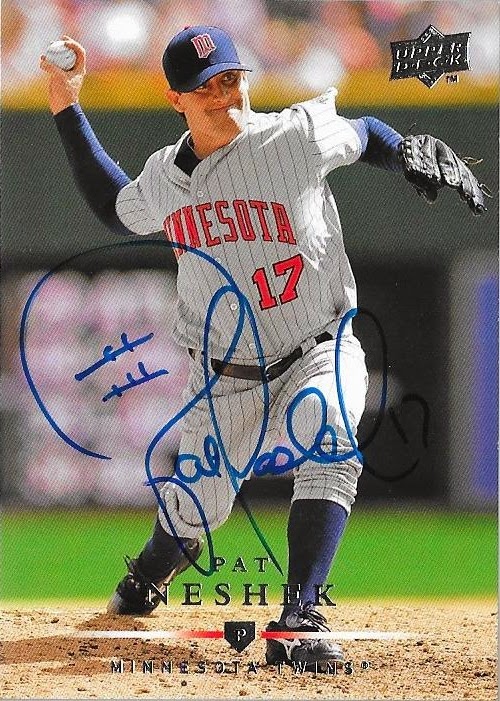 This guy may have been the first to come to mind when you all saw the post title, and rightfully so. Pat has been one of the best guys and signers in baseball history, ranking among the likes of Bob Feller and Bobby Doerr as far as TTM'ing is concerned. Neshek's autograph is the most unique in the game today, as he places baseball seams inside the "P" in Pat. Otherwise, the rest of the autograph flows well, and he tops every autograph off with his number 17. If you wish to try out through the mail autograph requests, I highly recommend sending to him with your first request. And before I move forward, I'd like to point out that this guy has become one of the best middle relievers in baseball recently, which is something few actually mention. Way to go Pat; the entire hobby is rooting for your success! 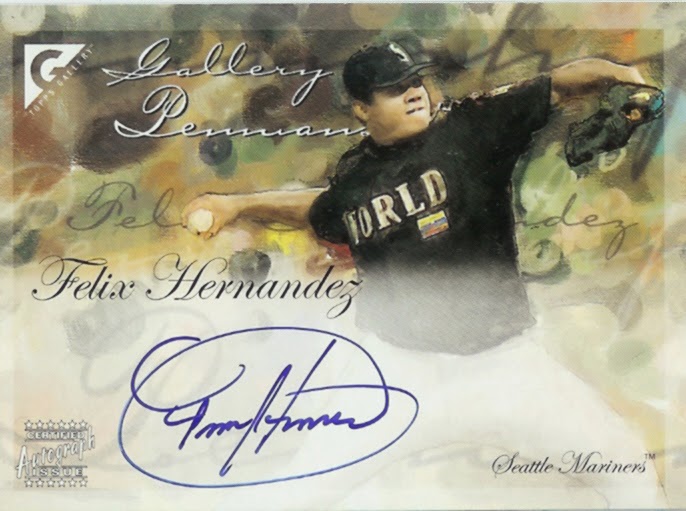 Taking the bronze medal is the King. Felix Hernandez is primed for a huge 2015, although he struggled on Sunday and had to leave the game early with quadriceps tightness. He wears his heart on his sleeve for the Mariners, and the fans are in love with him. And on top of it all, his autograph embodies the royalty in his nickname. The circular outline of his name makes this the most elegant autograph on this list, and the best autograph to get of any superstar player in the game.


Even when I hardly knew any prospects in baseball, I knew who Julio Teheran was. Why, you may ask? Come on, just look at that signature on the Triple Threads card pictured above. I began to always subconsciously think of him as "the prospect with amazing penmanship", and when he came up with the Braves I naturally started rooting for him. Teheran went into 2015 with two tremendous full seasons under his belt, and he's a great candidate to continue that trend in the future. When a player is worth rooting for just because of the way he signs his name, you know he deserves to be ranked highly on this list. 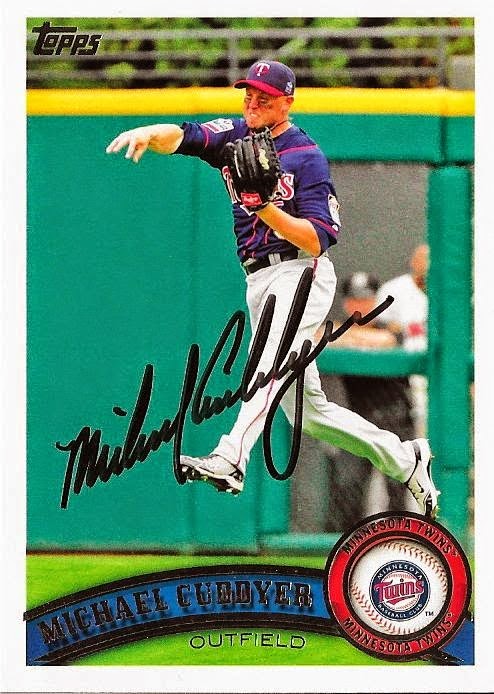 Until Cuddyer walks away from the game, he's got the top spot on this list just about locked up. He may not be the player that Harmon Killebrew was, but he has carried on a tradition of excellent penmanship from the face behind the MLB logo. Perhaps players like Miguel Cabrera, Felix Hernandez, and Victor Martinez have flair in their signatures that may look more enjoyable to collect, but Cuddyer's is far classier.

There you have it; my top 10 favorite autographs in baseball today. I could think of about 30 total autographs capable of holding a spot on this list, but chose a select 10 that I either am proud to own or desperately wish to one day possess. I actually have autographs of 8 of the 10 players on this list, two of which I haven't gotten to share with you all yet.

The point of this post is to show you all that the "there aren't any good autographs anymore" argument is not true. While the players of yesteryear were more likely to provide their fans with gorgeous signatures, there are still guys today who try to appeal to those of us in the hobby who enjoy collecting ink. There are probably five or six bad autographs in baseball today for every average/better one, but with thousands of professional players out there, there are plenty of guys to collect.

Whose signature(s) in the game today do you enjoy most? Are there any names you think should have been included, and why?