The Rest of my Commons from Just Commons!

Hey everyone, Drew back here! I can't believe how quickly my second semester of college has gone. Three weeks remain, including finals week, and then I'll be off for my first college summer vacation. I recently started working at Dick's Sporting Goods as a cashier, so hopefully after a few weeks of saving I'll be able to become even more involved with the hobby. It's nice to finally be receiving money rather than solely spending it, and I'm excited for the summer!

Today, I wanted to wrap up my first order from JustCommons.com. On Wednesday, I shared my seven new Joe Panik PC additions, and along with those, I was able to knock off 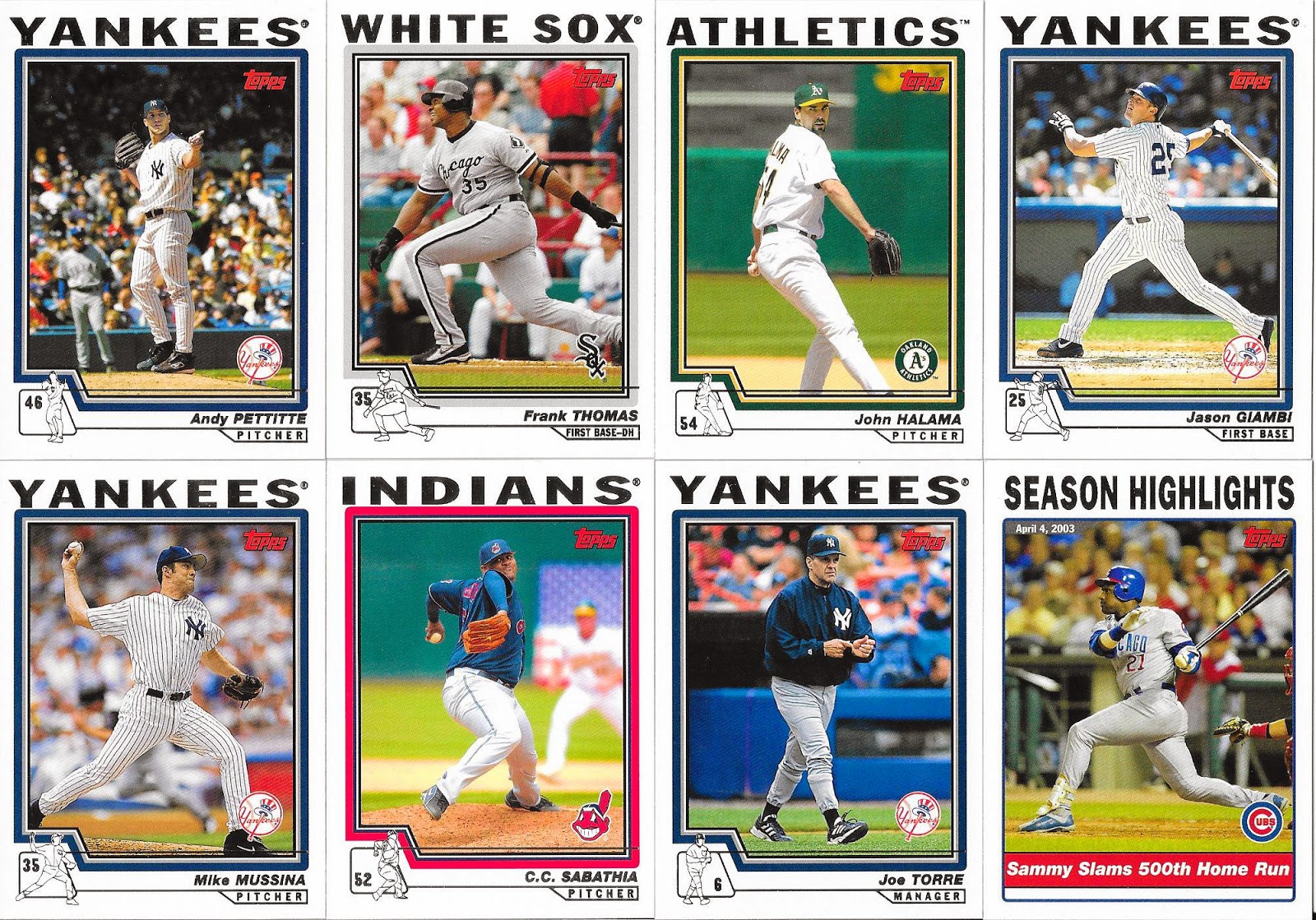 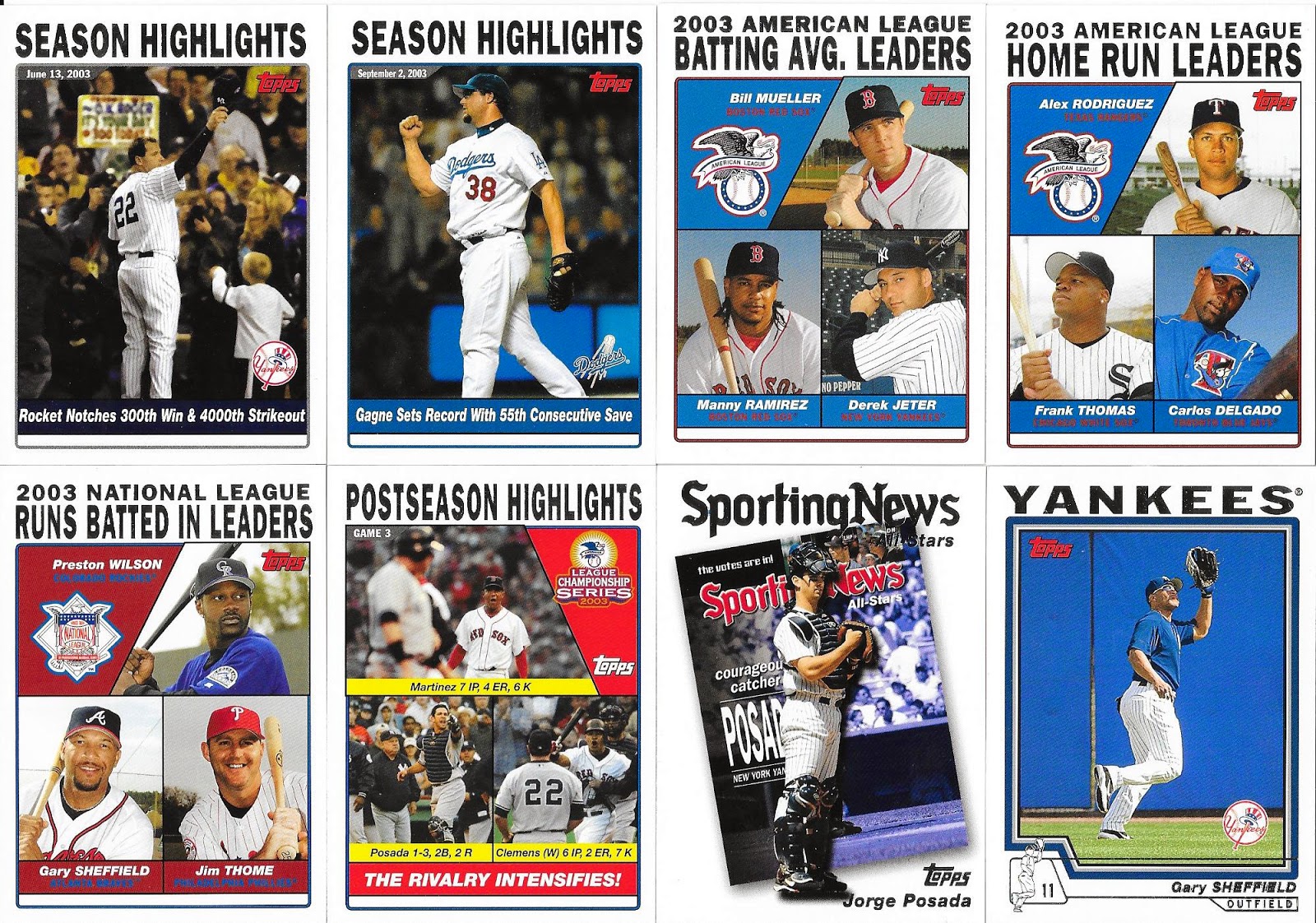 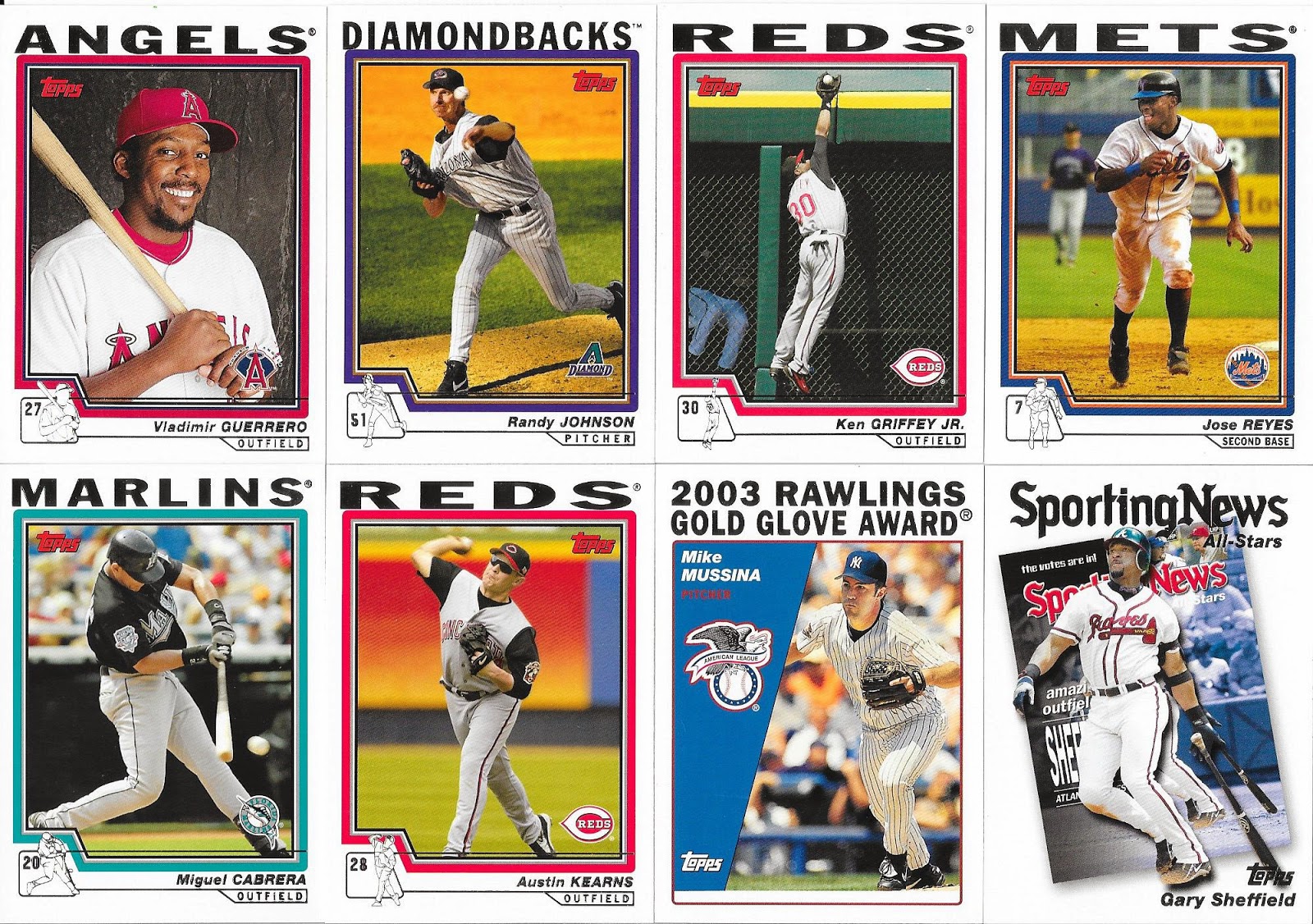 2004 Topps was the first set I was given for Christmas from my parents, and sure enough over the years of elementary and middle school I managed to lose pieces of it. I traded some cards away (why?) and with that I recently decided to put it back together, put the cards in a binder and store them away. I'm not a very big fan of the set, although I've always liked the little outline drawings of the players in the bottom left corner of the cards. After this purchase, I'm down to needing only three cards to complete the set (I can't seem to find which three I'm missing at the moment, but when I do I'll leave them at the end of this post). I added 24 cards, including of players I collect so I can tuck those away with my PC's while still having the cards in the set binder. Perhaps my favorite part of the set are all the Postseason Highlights cards starring the Yankees and Red Sox. Ah, the good ol' days. 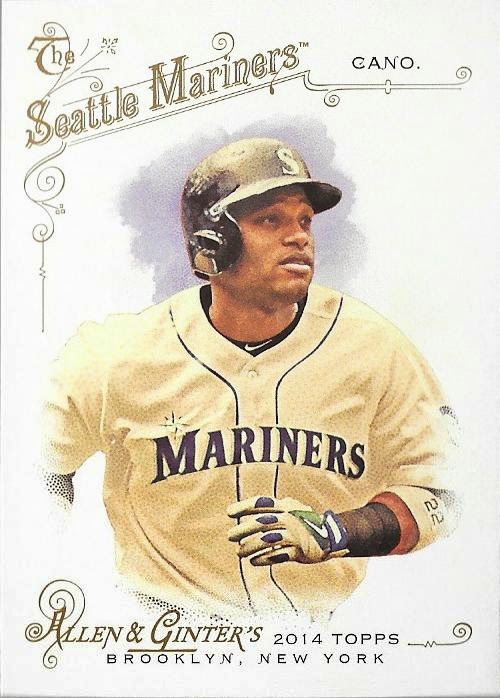 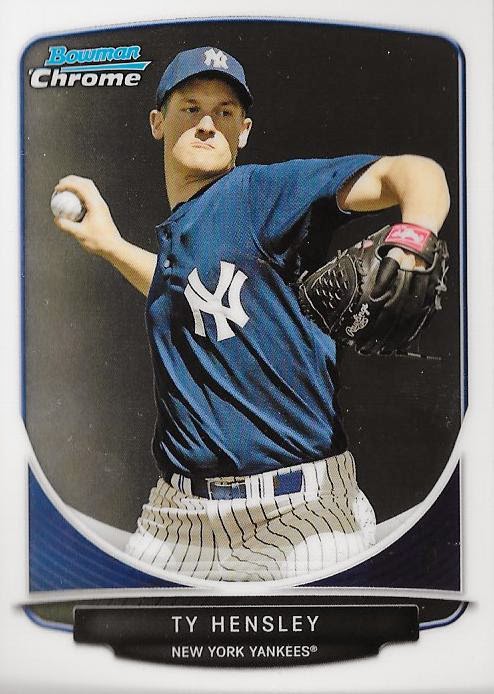 I also attacked a few of my other collections, including some I rarely pay attention to anymore. I couldn't pass up an Allen & Ginter Cano card, although I'm still trying to adjust to that Mariners uniform. As for Hensley, well, it sounds like it's going to be yet another uphill battle for the poor guy. Not only was he attacked over the offseason in his hometown and brutally injured, but he also had to have Tommy John Surgery. Ty seems like a really good kid, and he was great signing for me through the mail, and I wish him all the best with his recovery; I know the TJ Surgery news was crushing to him. 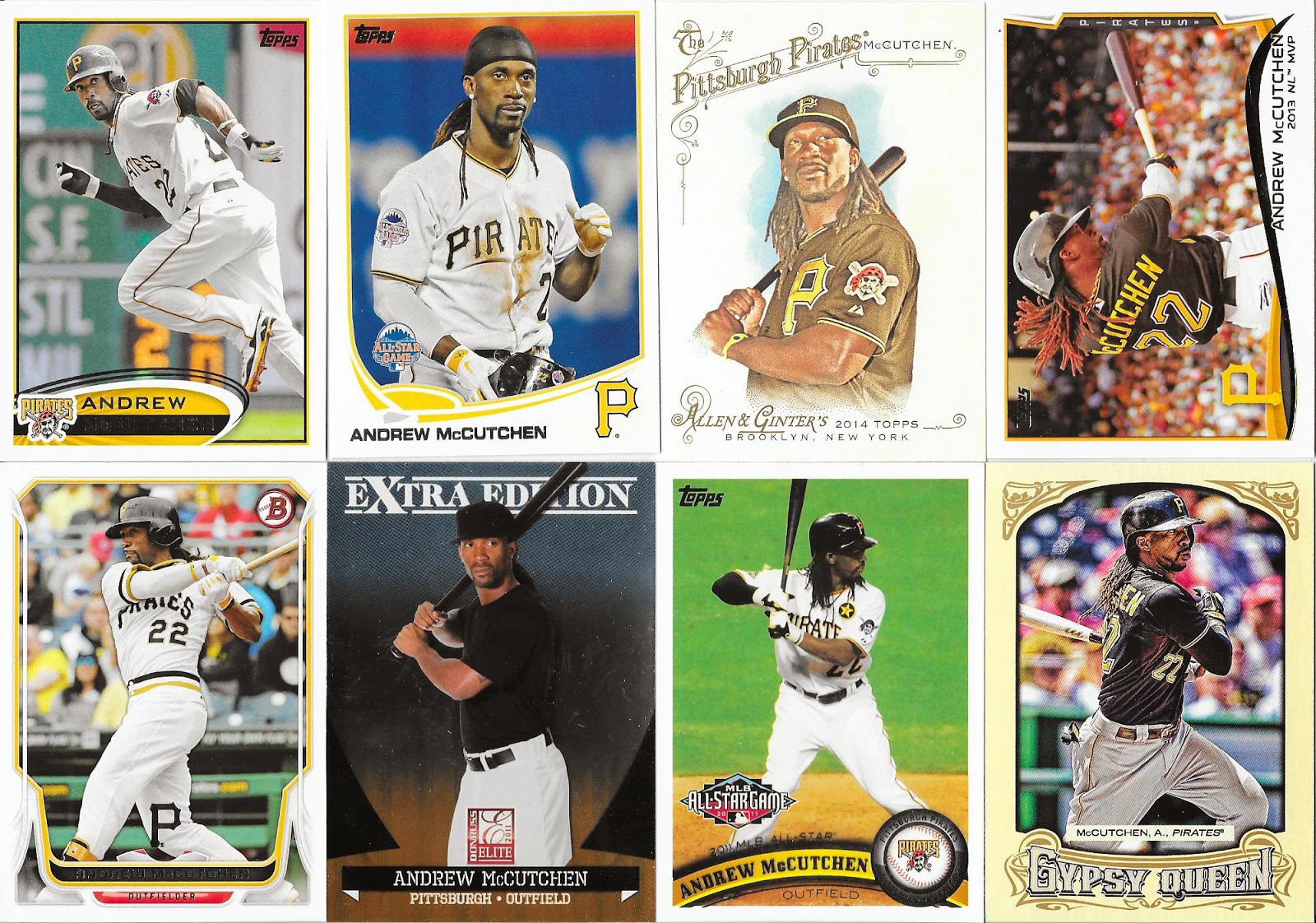 Andrew McCutchen was the other player I focused on with this order, because I was missing some pretty key base cards of his from over the years. I don't ever expect to have all the 1/1's and autographs, but I'd like to at least gain most of the players I collect's base cards from their playing days. Cutch isn't off to the greatest start of his career in 2015, but he's a consistent force to be reckoned with that should not be taken lightly. 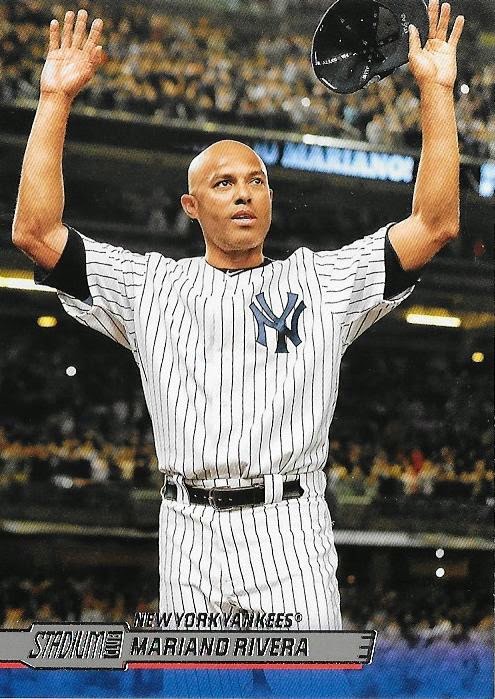 Topps Stadium Club is such an awesome product, and as soon as I knew this card of my all time favorite pitcher existed I wanted to add it to my collection. Sure enough, I was able to add this, as well as the following card of Mo's; both of which depicted a very special night in Yankee Stadium: his final game. 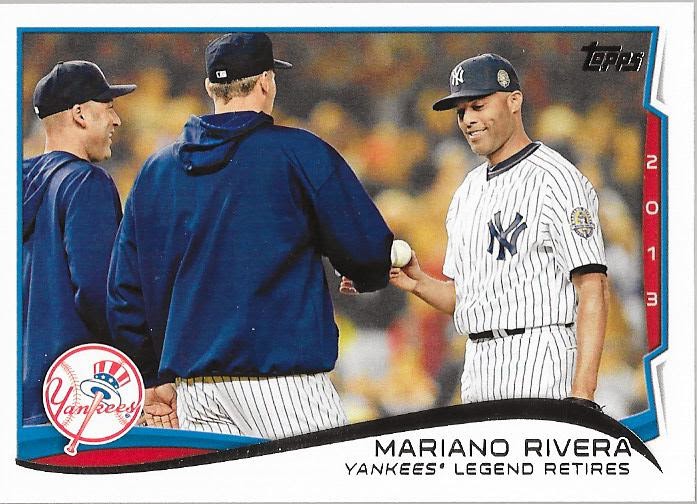 This was such a fantastic baseball moment that will most likely be overshadowed forever by the way Derek Jeter went out. I don't think Mariano minds this all that much, though. I wanted to make sure I had something to remember this game by, and this 2014 Topps will certainly do the trick. Topps has done a great job highlighting all the recent Yankee retirements, and I'm excited to see who will be the next player (from this current team or in the future) to make their mark on the franchise half as much as Jeter and Mariano did.

I was very pleased with my first JustCommons.com purchase, and I hope to add more cards from their site in the future. If you haven't given it a chance yet, I highly recommend you do. While Sportlots may provide you cheaper prices, JustCommons has a universal shipping cost that probably will save you money in most cases. And don't worry Check Out My Cards, you're not going anywhere. I'm still loyal, I swear.