Hey guys, Drew back here! I know I'm a bit late to the parade, but Happy Opening Day to all of you baseball lovers out there. I spent the day watching games all day long, the way it should be, and other than the Yankees it was an entertaining day! As I've stated previously on this blog, this will be the 11th year I've actively followed the Yankees, and with that I'd like to wrap up my first decade with a celebration of the best moments I've embraced while loving the most hated team in the game. This will run in chronological order, as it is simply too difficult to rank so many memories I'll never forget. 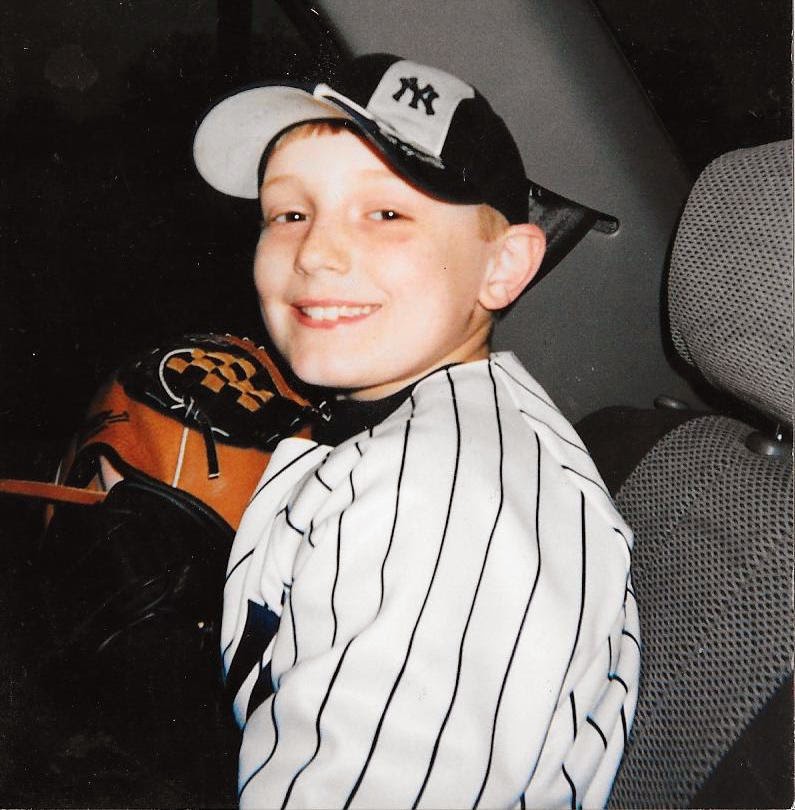 I was 9 years old when my Dad, Uncle, and Grandma took me to my first baseball game. My Aunt got us beautiful box seats and it was Bat Day; Yankees vs. Blue Jays. Although the Yanks dropped this one, 8-6, I'll always remember thinking infield pop ups were home runs. I learned what power truly did look like when Gary Sheffield went deep, and he became one of my favorite players for his intense batting stance and hard swings. 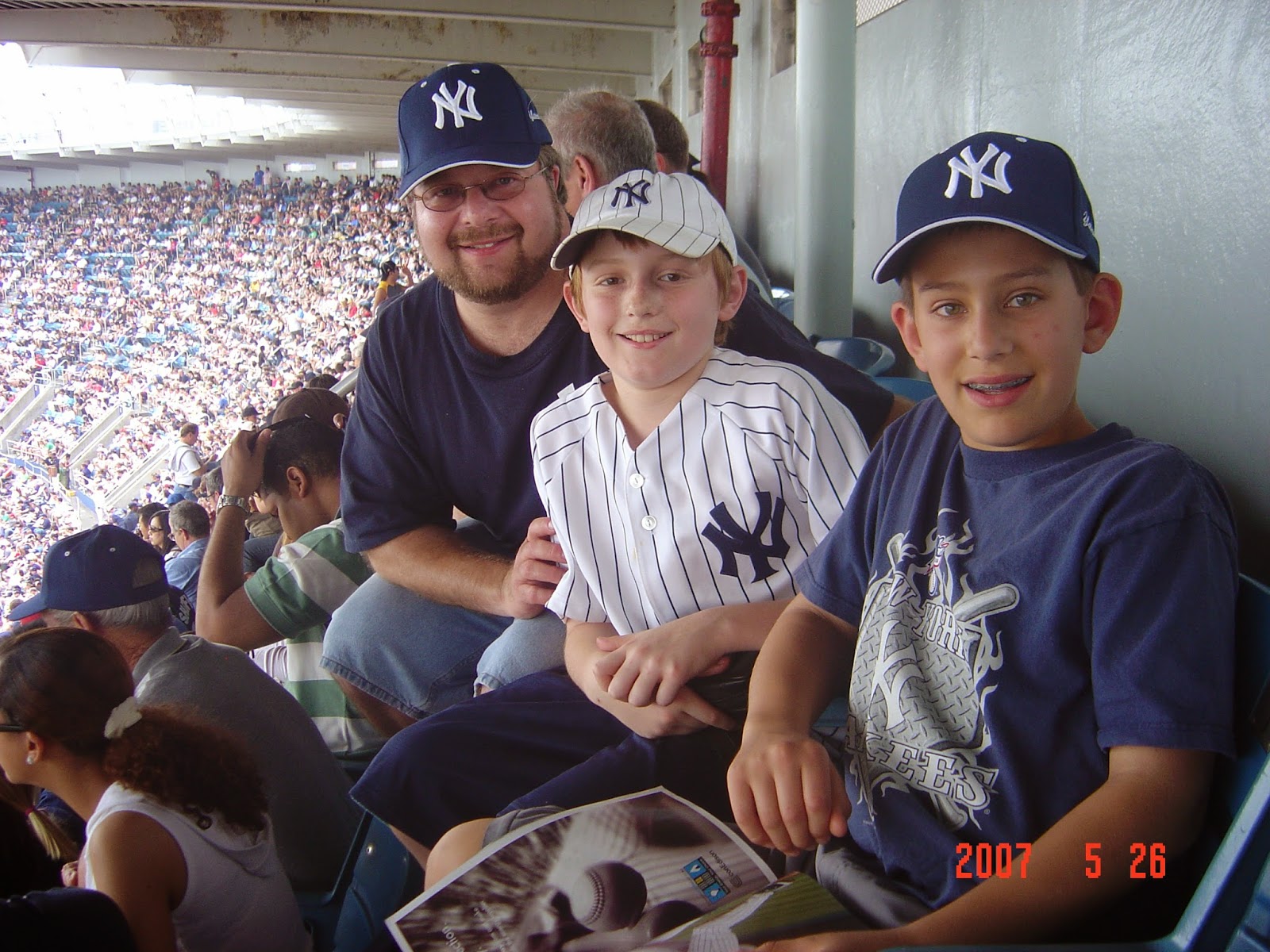 My dad, best friend Mike, and I got to our seats in the old Yankee Stadium, and realized we were sitting in the highest row in the entire ballpark. After a few innings, we were returning to our seats with food when one of the Yankees security employees was nice enough to move us from the top seats in the section all the way to the front row, where nobody ever showed up. Again, the Yankees lost the game, but it was such an amazing gesture and I never forgot how excited I was to see my favorite players even closer up than before. Oh, and we thought it was the coolest thing when Ron Guidry waved to us while paying a visit to Monument Park. 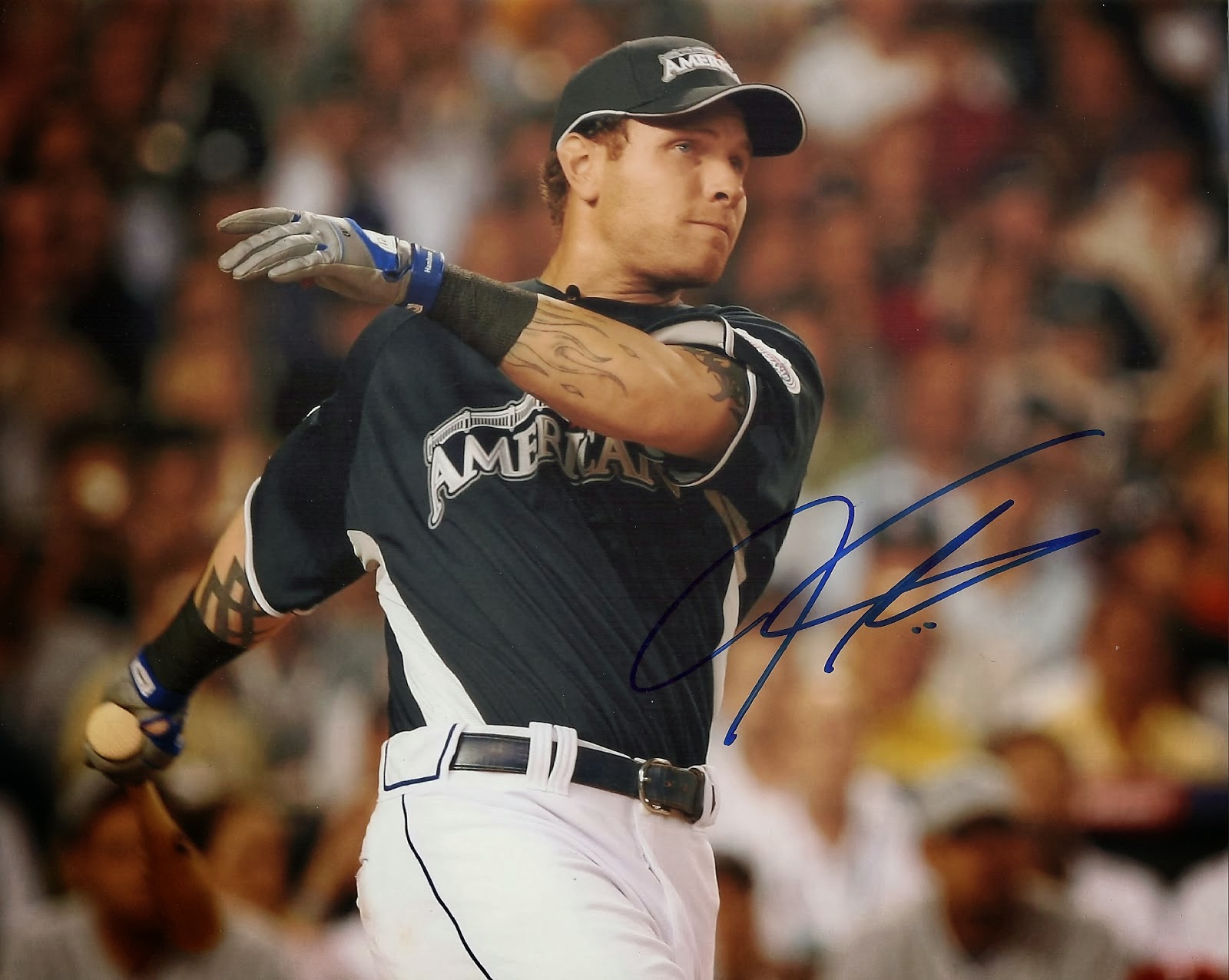 I didn't get to go to any of these events like I did in 2013 when the Mets hosted the All Star Game in Citi Field, but I'll never forget watching the Home Run Derby and the Game itself. My dad and I watched Josh Hamilton drive ball after ball into the dark Manhattan skyline, and he became one of my favorite players in the game that night. The going away party, including all of the final game ceremonies and Derek Jeter's speech were also special memories that I wouldn't forget either. 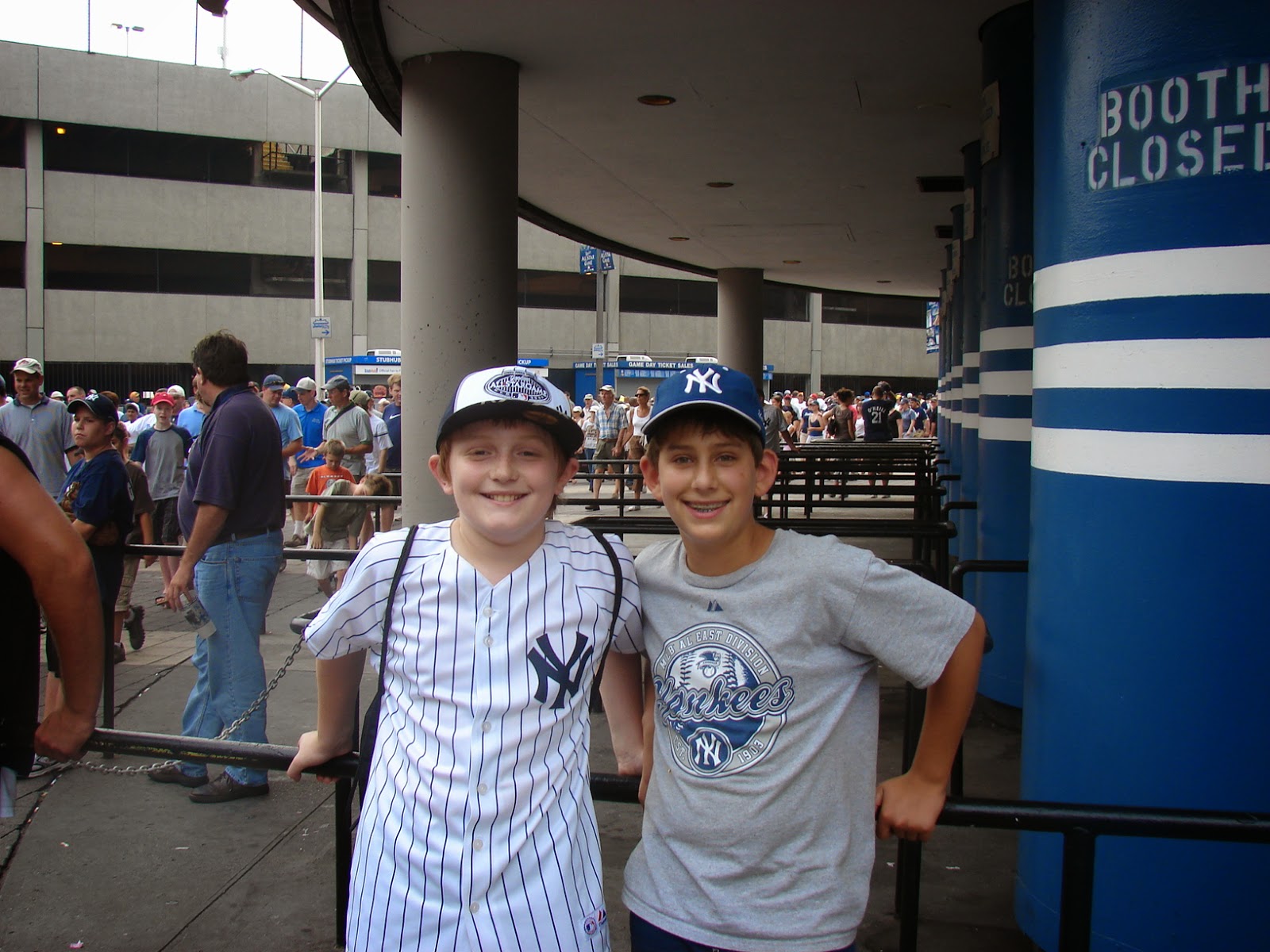 I had been excited to go to this game with my Dad for a while, but things got even more interesting when my best friend Mike called me one day, inviting me to the same game! He ended up taking another one of our close friends instead and sitting across the stadium, but we all took the train together and couldn't wait to watch the game. We used our binoculars to wave from where we sat in the left field bleacher section to the right field section, and we saw Joba Chamberlain take the hill for the Bombers. The game was a slugfest for New York, as A-Rod hit a solo shot and Bobby Abreu clubbed two over the fence, and the final score was 13-3. What a way to go out of the old Stadium. 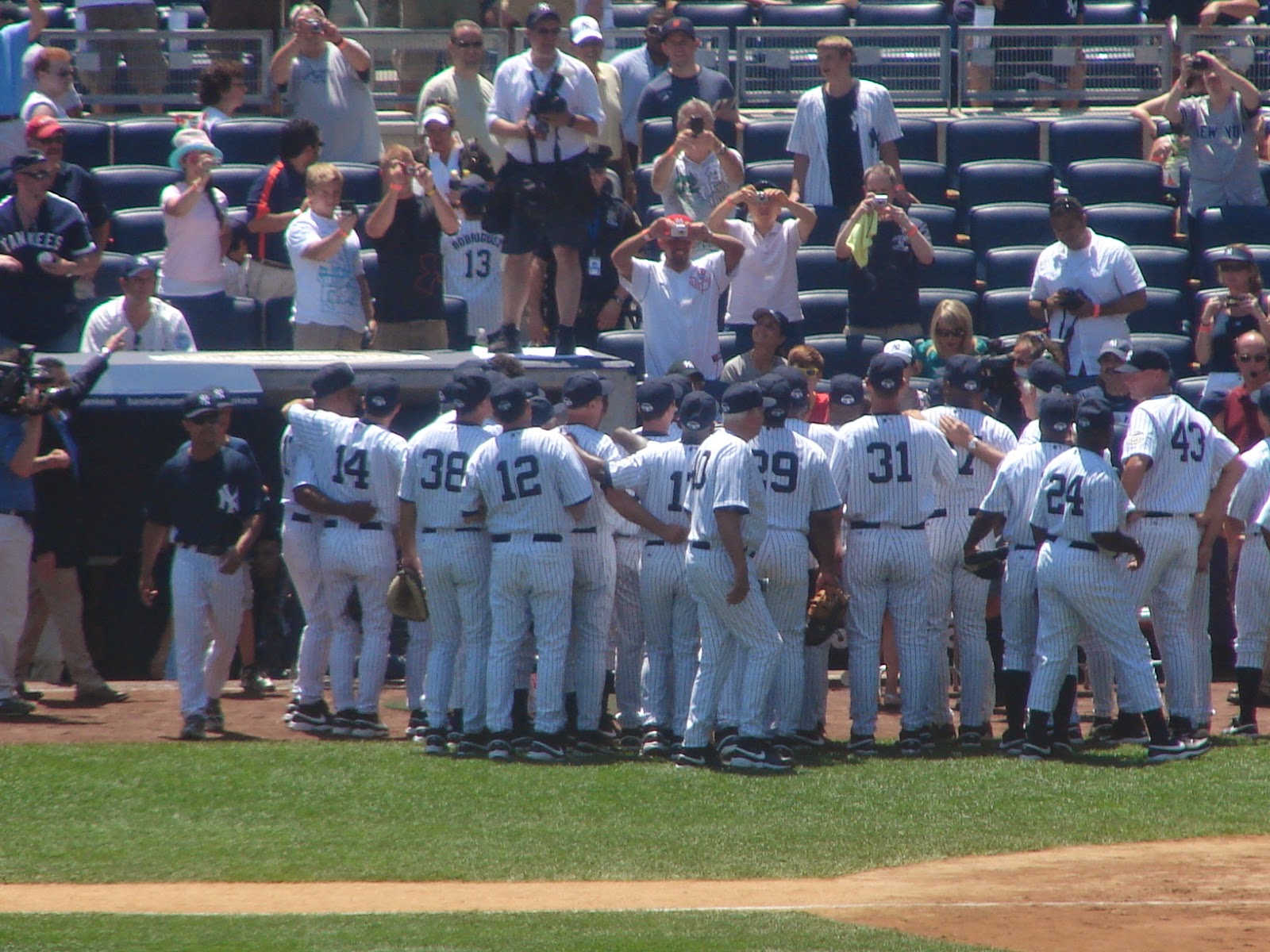 Ah, another memory, another glimpse of Joba Chamberlain's mediocre starting pitching career. However, this game was memorable for just about all of the other reasons, as the Yankees took this game by a final score of 2-1. It was Old Timer's Day, and while I had seen a ceremony in person before in 2006, this one felt more meaningful to me as I actually got to watch them play the game and the weather was much better. After assembling one of the best teams in baseball over the past offseason, signing CC Sabathia, AJ Burnett, Nick Swisher, and Mark Teixeira; this Yankees team became extremely fun to watch, and success would soon follow.

The 2009 playoffs were magical for my Yankees, and it was fun to see them sweep the Twins and knock off the Angels en route to the Fall Classic. This matchup was a battle between two of the higher payrolls in the game, and it was a fun one to watch. Cliff Lee pitched a gem in Game 1, but long-time foe Pedro Martinez couldn't get it done in Game 2. The Bombers out-slugged Philadelphia in Games 3 and 4, but Chase Utley put the success to a temporary halt until Game 6, when Hideki Matsui's 6 RBI brought home the championship to the city that never sleeps. I missed out on the dynasty era by a few years, so 2009 was the only year I remember fondly. And what a year it was. 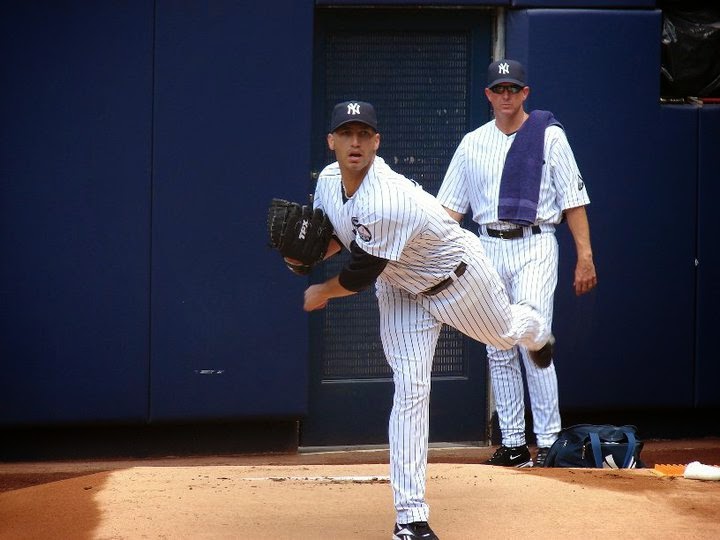 Andy Pettitte vs. David Price. Two of my favorite pitchers in baseball went head to head in this one, and it wasn't a pitcher's dual by any sense of the phrase. The Yankees won this one 9-5, and Alex Rodriguez was a key contributor in the game. Pettitte left very early in the game with a groin injury that sidelined him for the rest of the season after starting the season better than he had in a significantly long time. His injury was extremely upsetting, but it did not get in the way of the day. Dad and I went to the team Museum for the first time, and we sat in the front row of the right field bleachers on field level! Nick Swisher was one of my new favorite players to watch, and we practically got to hang out with him, interacting between innings frequently. And to top it off, just a few feet from our seats was the Yankees bullpen, where I watched Pettitte and Mariano Rivera warmup right before my eyes. We have since sat in these seats on two other occasions, but the first time will always mean a lot to me because I was practically in baseball heaven.

I watched every pitch of this game on my TV, highly anticipating baseball history. Jeter came into the game two hits shy of 3000 for his legendary career, and facing David Price, he started the game with a single. In his second at bat, he homered in Hollywood fashion for his 3000th hit, and he wasn't even done. He recorded a double and two more singles to follow, including a tiebreaking single in the 8th inning. This was one of the best single player performances I have ever had the pleasure of watching, and easily the most impressive of anyone in a Yankee uniform. 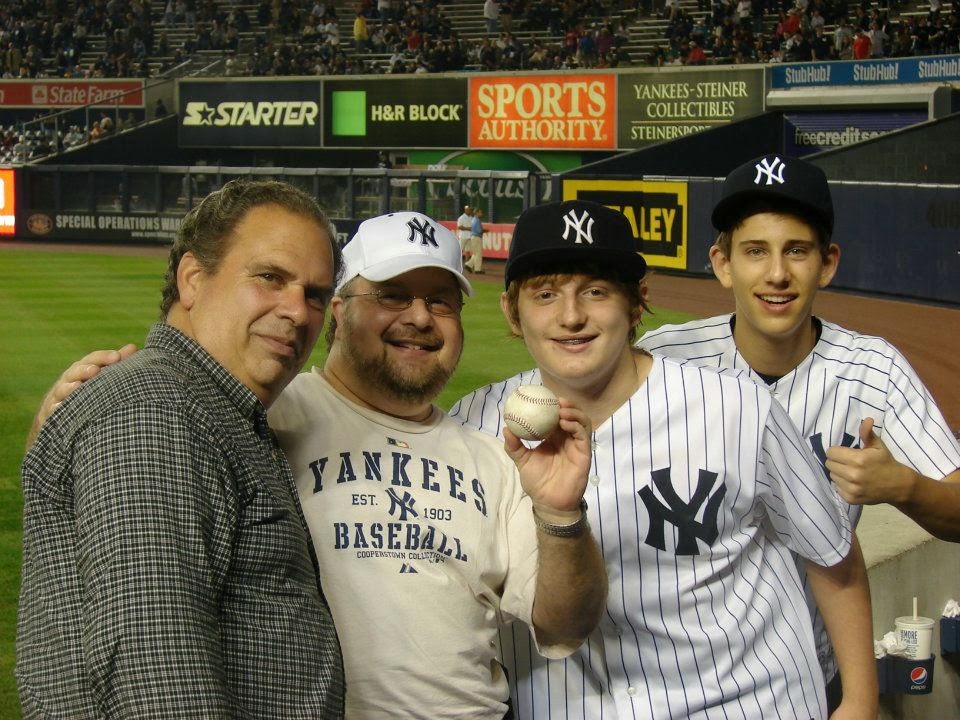 Once again, here we were in the right field seats I spoke of previously, which could only mean we were in for a treat. CC Sabathia faced off against Jeremy Hellickson, a pitcher I once watched pitch for the Hudson Valley Renegades without even knowing it. The Yankees already clinched playoff berth earlier that day in Game 1 of their doubleheader, but Jorge Posada wanted to finish the deal and clinch the AL East. Posada wasn't in the lineup, but pinch hit in the 8th inning and delivered a tiebreaking, two run single that went on to win not just the game but the division! Robinson Cano crushed a home run earlier on that landed two rows behind us, and we managed to be on television for a few seconds and hold the baseball for a picture! This was one of the better games I've seen in person, and the Cano home run made it a lock for this list.

The final moment on this list comes again by way of our former captain, Derek Jeter. Last fall, I went through a lot emotionally being away from home at college for the first time. I had a floor meeting the night I knew Jeter would be playing his final game at the Stadium, and I decided to fake being asleep just to see the game. At first, I didn't miss much, as the Yankees appeared to be ready to win the game 5-2 with reliable righty David Robertson coming out of the bullpen to close things out. Robertson coughed up two home runs, and the Orioles tied up the score, but this was a good thing. I wanted one more Jeter at bat, as he was 1-4 at the time with a relatively lackluster performance. He got that opportunity, and he drove in Antoan Richardson to win the game! Watching my all time favorite player jump for joy as he faded into Yankees lore was perhaps the most surreal moment of my life, and it took away from some of my pain I felt being away from my family.

Some other key moments that just missed the cut:
- My second Yankees game, which was more memorable for an embarrassing accident in the bus bathroom than anything else.
- The Yankees signing of Johnny Damon in 2006
- Receiving TTM successes from Yogi Berra and CC Sabathia
- Meeting Whitey Ford, Goose Gossage, and Don Mattingly, among others, over the years
- The two biggest spending sprees they have made in this timeframe that got me excited; 2009 and 2014.
- Raul Ibanez's epic 2012 playoff highlight reel (so hard to keep this off the list)
- The few times my Grandpa Walt brought me to Yankee Stadium before he passed away last summer.
- Taking my girlfriend Victoria for the first time in 2014

The point of this post isn't to brag about my life and how lucky I am, but instead focus on thanking all of those who have made these 10+ memories happen, particularly my parents. My mom and dad have spent a lot of time and money helping me live a special 18 years, and even though I missed the best years in recent Yankee history, I still have seen plenty of greatness. It has been a mostly enjoyable, yet often painful 10 years, but I wouldn't trade my love for the game for just about anything.

Have any memories you wish to share? Feel free to leave them in the comments below!