Hey guys, Drew back here! On Opening Day, I just so happened to get an autograph in my mailbox, courtesy of one of the top position player prospects the Yankees currently have in their farm system! 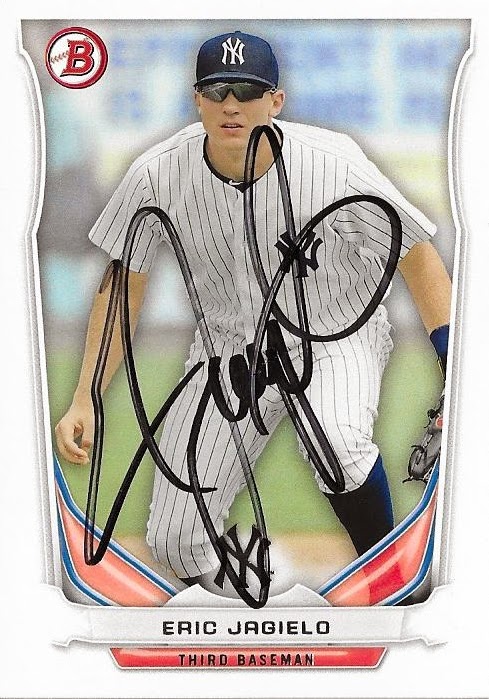 Once again, I got back a request I did not send in Spring Training, leaving me still at a 4 for 28 rate. My autograph batting average of .143 is worse than Adam Dunn's 2011 season, and it's safe to say I had higher expectations than this. But as for the autograph at hand, I was lucky enough to get a TTM I had previously written off back! Yankees top-10 prospect and third baseman Eric Jagielo returned his Bowman rookie card signed nicely in black for me in 273 days! Scott Rolen was brought in to work with Jagielo this Spring, and it is clear that the Yankees hope for a bright future from him. They seemed to have made 3 great picks finishing the first round of the 2013 draft, taking Jagielo, Ian Clarkin, and Aaron Judge. I'm especially looking forward to Judge, and still need to get myself an autograph before he makes it huge!

Thank you so much for the autograph Eric! I hope to see more of your name in the future, and hopefully in Yankee Stadium!