Hey guys, finishing yesterday's stuff with a couple packs I got from Target before the movie. So, I got a pack of Updates & Highlights, SP Authentic, Ticket to Stardom & O-Pee-Chee, here's the results:

Thoughts: Now I have the black border and regular stinkin Josh Bard mugshot card. Want it? All for trade, no intentions of building the set.

Thoughts: Not bad, I hate Dice-K after drafting him as my ace in fantasy last year, and he sucked, man, if I didn't have Cliff Lee & Justin Verlander. The Greinke is decent but the insert is not, the Ivan Rodriguez is nice, the Ichiro & Griffeys are cool too.

Thoughts: Awesome pack, likin Ticket to Stardom so far. The funny thing is before I left to go to the movies, I was working on my wantlist, and I just put on the Posada & A-Rod seasoned veterans when I left. The A-Rod is nice, cool insert, but the only flaw in this is the stupid perforated cards. If this is a ticket brand then every card should have a ticket feel, not just one card per pack. I like the perforated's a little more because of that, but every card should be like that. Nice pack though

Thoughts: This was some steroid usin/free agent/pot smokin/horrible team good player pack! And an autograph! The A-Rod is cool to have, and the Slowey is an awesome pull, although it probably only sells from 5-10 bucks. It doesn't say the odds on autographs on the Upper Deck packs, so that stinks, but it isn't too easy to pull an autograph in retail!

Overall a pretty good purchase, happy with the results, I opened them in the movie theater. For $10 or so it was a steal. I beat the packsearcher!

Lastly, you know the Topps complete sets they sell at Target with the Mickey Mantle memorabilia card staring at you in front of very thin plastic? Well, some idiots stole them all at my Target! I don't buy full sets but you must be kinda desperate if you're stealing baseball cards. Arg! See Ya! 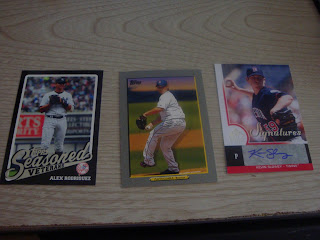 All For trade except Yanks
Posted by Drew at 8:49 AM