Hey guys, Drew back here. Usually I hate TTM failures, but this one kinda cracked me up. I got 2 envelopes in the mail yesterday, the first one I'll show was a nice success! 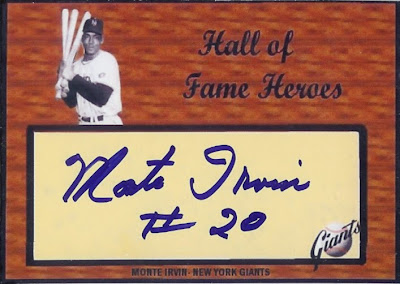 Giants Hall of Famer Monte Irvin signed a card for me! Right now the Hall of Fame autographs are rolling in, just add this to the list. Irvin if you didn't know played left field in the Negro Leagues for the Newark Eagles, then broke into the majors in 1949, shortly after Jackie Robinson broke the color barrier. His career batting average in the MLB was .293, and he was inducted into the Hall of Fame for his Negro League play as well as for his contributions to the game. Today he serves on the Veterans committee for future Negro League elections into Cooperstown.

Monte signed the card beautifully in blue sharpie, inscribing his number 20! It took 14 days for the card to arrive home, and I sent him $5 because I normally do that to guarantee me a HOF autograph. Thanks Mr. Irvin!

Moving along to the odd one, I sent a custom Yankees card to Horace Clarke, a former second baseman for the Bronx Bombers back when they stunk it up in the 60's. People refer to this era as the Horace Clarke era for a reason! So when I got this letter back in the mail, I was not very surprised... 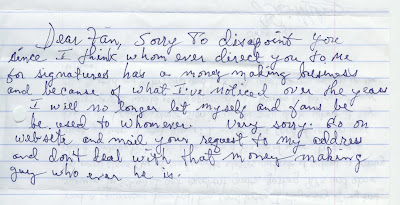 Instead of just signing the dang card, he had to write me a full letter on the back of my letter! This is what it says if you are struggling to read it like I did (and still do):

"Dear Fan, sorry to disappoint you since I think whom ever direct you to me for signatures has a money making business and because of what I've noticed over the years, I will no longer let myself and fans be used to whomever. Very sorry. Gon on website and mail your request to my address and don't deal with that money making guy who ever he is."

Ok... well that is pretty much the weirdest thing I've ever seen in a TTM. I get the point that, wait never mind, I don't get any points. So he took all this time and wrote this whole letter to me, and not only did he not sign the letter, but he accused me of being in a money making business? What the heck? Is he paranoid?

I'll leave you with that. Is Horace Clarke paranoid? His autograph never sells for more than 5 bucks so it's not a big deal if we sold it anyway, which I wouldn't have done.