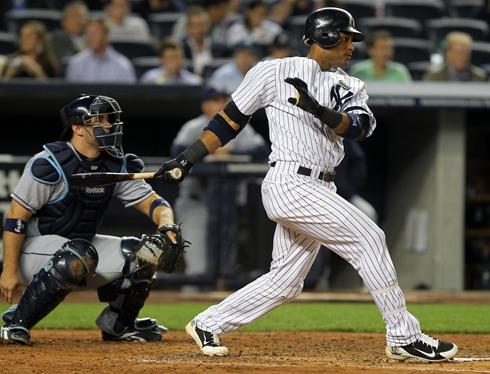 Hey guys, Drew back here, and as you all know, the baseball regular season unfortunately ended just yesterday. I'm not gonna sit here and cry about how the Yankees couldn't win the division, because first, I'm not like that, second, they didn't deserve it the way they were playing, and third, I would much rather play the Twins than Texas anyway. So I'm here to judge our position players, and pitchers, I'm gonna give them all grades and stuff, so stay tuned. We'll start with our catchers:

JORGE POSADA: .248, 18 HR, 57 RBI
What an awful year for Posada. He suffered so many injuries and it really seems as if he's falling apart. He played in 120 games, with 383 at bats, and in some games he had his moments, but it really is looking like the beginning of the end for the 39 year old vet. Grade: C-

FRANCISCO CERVELLI: .271, 0 HR, 38 RBI
Wow, I didn't even know that he didn't hit one home run in all of the regular season. He did well as backup, and ended up playing in 93 games this season. He slowed down as the season progressed but overall, Cervy was decent. Grade: C+

MARK TEIXEIRA: .256, 33 HR, 108 RBI
Tex had an awful beginning, but a terrific ending to the 2010 regular season. With close to 100 at bats more in the first half of the season, Mark still hit more home runs after the All Star break. I would've liked to see his average a little higher but he is a great leader and a great fielder as well. Grade: B+

ROBINSON CANO: .319, 29 HR, 109 RBI
Robinson has matured since the departure of outfielder Melky Cabrera into a top notch All Star second baseman. He had an outstanding year and I'm really rooting for him to win MVP, although I do think Josh Hamilton has a better chance. I would rank Cano over Utley next year, and maybe even over Uggla, because I still don't think he's reached his complete potential. An excellent year in every way imaginable for Red Hot Robby. Grade: A+

DEREK JETER: .270, 10 HR, 67 RBI
Derek Jeter? You know he has an edge! Not this year Ford fans. Derek has declined into an un-impressive shortstop who's really aging and losing it. Although I think he'll make some proper adjustments whether he wants to or not during the offseason, I really think the end is also near for our captain, unfortunately. He still will rank above at least half of the shortstops, because he is Derek Jeter, and everyone thinks he's fluking, but I've got news for you. He'll reach 3000 hits next year, he's 36, I think he'll play a good 3-4 more seasons. I hate to see this happen, but Jeter is finally escaping his prime. Grade: C

The Rest of the Infield: Nunez, Pena, Miranda, Russo, those young guys were decent at best off the bench. Pena and Nunez are good fielders, and Miranda adds a little pop to the bench. Grade: C

BRETT GARDNER: .277, 5 HR, 47 RBI
Gardner is without a doubt in the top 5 most exciting current players to watch right now. He's a great fielder, a solid hitter, and of course, extremely fast. He's fun to watch. But forget his skills, he started the year hot, but cooled off as the year goes on. He still contributed, so all in all, a decent year out of the starting left fielder. Grade: B-

CURTIS GRANDERSON: .247, 24 HR, 67 RBI
Granderson started off horrible, and I was starting to get disappointed of trading prospect Austin Jackson to the Tigers for him. But, take a look at this. Before the All Star break, he was hitting .240 with 7 home runs and only 24 RBI. From the All Star break on, he hit .253 with 17 home runs and 43 RBI. Now that's a strong second half! I hope Grandy carries over this streak into the playoffs and next season! Grade: B

NICK SWISHER: .288, 29 HR, 89 RBI
How is it that the two players I decided to collect will receive the highest grade for batters? Maybe I'm psychic, but I guess I saw big years out of Swisher and Cano in the future. Swisher had an exciting year, one you can consider his best yet. He slimmed down in the offseason and was in great shape, and turned into a better hitter all around, hitting his all time highest batting average in a season. Great job Swish! Grade: A

The Rest of the Bench: Colin Curtis, Greg Golson, 2 young outfielders who made a small impact but did there jobs. Golson's memorable play was throwing out Crawford on catch him out-throw him out double play to end the game in a Yankees win. Austin Kearns was an ok pickup, he hasn't done much yet as a Yankee in the few months he's been around. Lance Berkman was a nice pickup, he's done well off the bench for us, but only as a DH. When he's in the field you'd immediately appreciate Teixeira more as a 1st baseman. And last but not least, Marcus Thames was a nice offseason pickup, as he's hit multiple walk off winners, and has provided a lot of power off the bench. Bench Grade: B-

I'll do the pitchers in the next post. What do you think Yankees fans, Yankees haters, anybody? Feel free to post something like this on your blog, I won't have you arrested or anything.