The Start of a Great Series 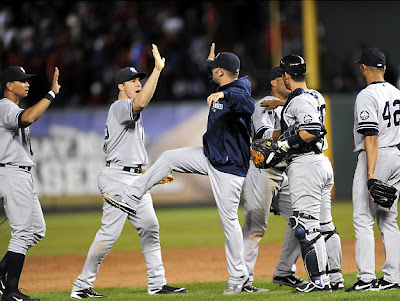 Hey guys, Drew back here. Last night I watched the entire first game of the ALCS, Yankees vs. Rangers, with my friend. It didn't look good at first for the Yankees, down 5-0 in the 7th inning, until Robinson Cano hit a solo home run to put the Yankees on the board. CC Sabathia did not respond well to the long rest, allowing 5 runs in 4 innings, getting a no decision. Then, Joba Chamberlain came into the game in the 5th inning, and Dustin Moseley allowed 0 hits in 2 innings of relief.

In the 8th inning, the Yankees battled back, with Brett Gardner leading the way with a clutch slide into first, beating out the pitcher C.J. Wilson to the base. This led to a huge rally, with key hits from Derek Jeter, Alex Rodriguez, and Robinson Cano to bring the game back to the Yankees, now leading 6-5. They never looked back as Mariano Rivera closed the doors and the Yankees took Game 1.

Today's game at 4:00 (ET) features a battle between Phil Hughes and Colby Lewis. Both pitchers were dominant, not allowing a run in both games for each of them. It should be a good matchup, and I can't wait to watch it! Overall I'm really impressed to see the Yankees battle back like that.

The other game tonight may be one of the top postseason matchups you can see right now, between Tim Lincecum of the Giants and Roy Halladay of the Phillies. Hopefully we can see a true pitchers dual! I'll definitely be glued to the TV tonight, are you
Posted by Drew at 2:14 PM