Hey guys, Drew back here. Yesterday was a great day for me, and since I have absolutely nothing else to tell you guys right now, I figured I'd talk about it. Yesterday we went to Bethel Woods, of course, the famous grounds of Woodstock! We left extra early so we could go to the Woodstock Museum, and then that night see a concert. I brought one of my best friends there, because he loves rock n roll and the Beatles and all. The Museum was really cool, it took you through the whole history of the 60's and Woodstock itself. They didn't allow pictures unfortunately so I can't really show you anything, but there is this video if you want to check it out:

While that was really cool, the main reason for this trip was to attend my 1st "true" concert in my life. And what better way to start it off than with a Beatles, one of those famous 4 guys that came out of an airplane way back in 1964, the famous guys who wore those colorful suits and tried to bring out peace in all different ways. Yes, one of them. And it was this one, 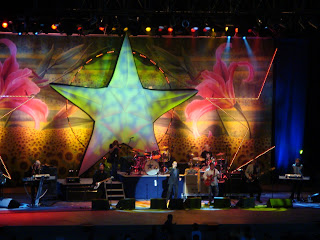 The Star does indeed represent good old Ringo, the former drummer of The Beatles. Sure, Paul McCartney may have been a little bit better to see, but nonetheless, Ringo was awesome. He played a few songs off his recent album "Y Not", some of his famous songs from his solo career ("Photograph", "It Don't Come Easy", "Back of Boogaloo", and "Honey Don't"), and of course his famous Beatles songs, "Yellow Submarine", "With a Little Help from My Friends" (which he connected to "Give Peace a Chance"to end the show), "Act Naturally", "Boys", and "I Wanna Be Your Man".

But Ringo wasn't the only star on the stage last night. Guitarist Rick Derringer, who is part of the All Starr Band like all the others, was incredible. He sang a few of his solo career songs including "Rock 'n' Roll Hoochie Coo", and "Hang On Sloppy" . Also, Gary Wright, Richard Page (from The Romantics), some drummer guy not named Ringo, and Wally Palmar were all pretty good. However, Edgar Winter stole the show. He played "Frankenstein", which was probably the best performance that night!

Overall, the concert was spectacular, and I strongly suggest if you like any of those guys, especially Ringo, go check them out if you can find tickets! See Ya! 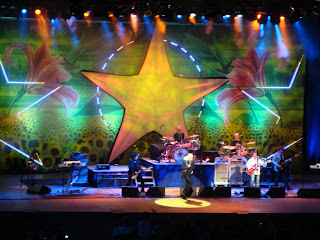