Catching Up! Some Mail

Hey guys, Drew back here, with some new stuff for ya. As I hope you noticed, we have an all new arrangement on this here blog. I tried to make it different, because it was time for a new design. So, I had a GREAT time in Washington DC, it was an amazing trip, and now I have some mail to share with ya. First up is some stuff from Jonathan of RGB Cards. Jonathan is from Australia, and he's the first person I've traded with from Australia! Here are the cards that made the journey over the Atlantic Ocean... 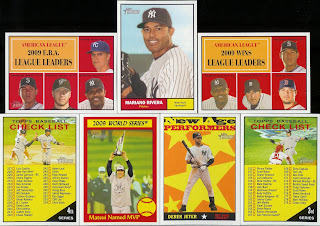 First are some cards I needed from 2010 Heritage. This set has dragged on and is getting kinda boring. But the Jeter insert is nice! 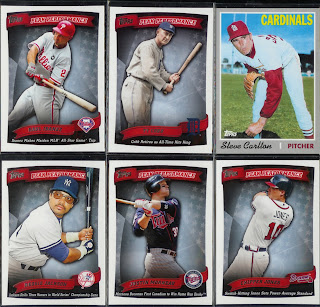 Here are 5 Peak Performances that I needed for the set, and 1 Yo Mama Card. I like these, but I gotta finish them now. Check out the set wantlists for stuff you may have to help me! 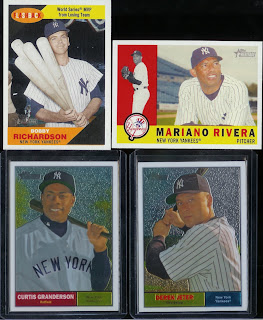 Lastly, some 09 Heritage cards, including a cool insert of Bobby Richardson winning the World Series MVP in a losing effort. The final two are chromes numbered to 1961 from 2010 Heritage of Jeter and Granderson. The Granderson is a monster but the Jeter is great looking! Thanks Jonathan! 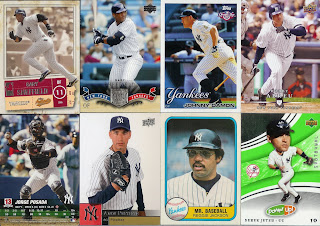 These next cards are from Cam H, of Collectable Cards. He hooked me up with some Yankees in a trade, and here is my share. I got some cool Sheffields, which is good because he used to be my favorite player when he was a Yankee. Next are more former Yankees in Damon and Abreu, two other faves of mine. I like the Mr. Baseball Reggie Jackson card, how awesome! It really should be Mr. October though. 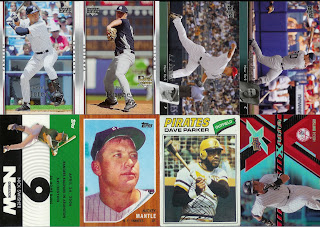 Finally, a nice Phil Hughes (now 9-1) rookie card, followed by some 2010 Upper Decks of Burnett and Posada (2 grand slam games in a row). The X Ponential inserts are awesome from 08, and the Matsui and a Abreu which wasn't scanned look spectacular. Lastly, a needed Swish and a Dave Parker card!

Thanks so much both of you, Cam, your cards will be packed out soon, I promise! See Ya!

COMMENT AND LET ME KNOW WHAT YOU THINK OF THE DESIGN!!!!
Posted by Drew at 8:54 PM