Hey guys, Drew back here. I wasted a lot of time already today, so I can't post much, but I do wanna share some more of the show. I figured there will be 10 parts, and on number 8 now I say I'm in good shape. Here is part 8:

The lineup was the only down part in my opinion for this show. I've been fortunate to meet Dave Winfield, Ric Flair, Al Oliver, Bill Madlock, Dave Parker, Cecil Fielder, Don Mattingly, and John Montefusco already, so the lineup was always the purpose in going to the show. Sure, I love to buy cards, but, I love a good lineup to blow money on! I thought the lineup was pretty weak to be honest, especially when I was going originally on Sunday but changed due to my friend not being able to make it that day. On Sunday the lineup was Wally Backman, Rafael Santana, Lenny Dykstra, and Joe Charboneau. Iwww. Dykstra was rumored to be enough of a jerk to just "forget" about the show and was a no show, so I'm glad I didn't go that day (though I doubt I'd have met him anyway, who likes Mets :)

So I felt very lucky to go Saturday. Billy Williams was supposed to be there for $35 an autograph, so I decided to do it and make a custom for him. Unfortunately, Billy came down with a virus and was too sick to attend. I understand, I feel like garbage today so I don't wanna go anywhere, plus he's only like 60 years older than me!

I had a decision to make, and I think I did the right thing. I decided to spend $30 on an autograph from former Braves star Dale Murphy, a should be Hall of Famer. Mike didn't have the $ to try Murphy, so I got my card signed and also got Mike a picture with him. Dale was a really really nice guy. We talked a little and he asked if I wanted an inscription. Since inscriptions usually cost extra, and he offered to do it for free, I said sure! Check out my auto, on a card that I bought for $3 to get signed. 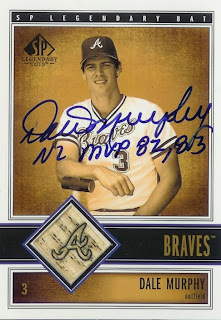 Is it just me or does that look really nice? 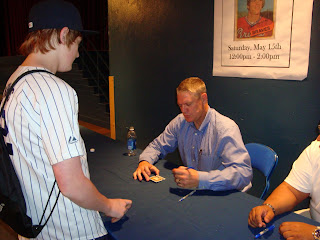 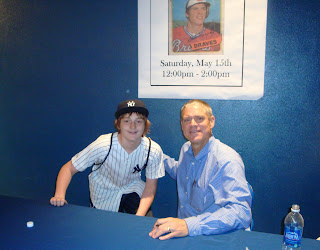 The other signer we visited, actually the only other one there, was 2 time All Star pitcher Scott McGregor. McGregor was an Oriole for most of his good years, but he actually came up through the Yankees system! Scott was a very nice guy, and Mike and I both met him and got some cards signed. I didn't prepare well before coming, which is shown by the 3 of us running around like idiots trying to find his cards. One guy was making a profit by selling them a dollar each and since nobody had any of him, I grabbed 2 of them. My dad found 1 more for 10 cents, a much better deal. 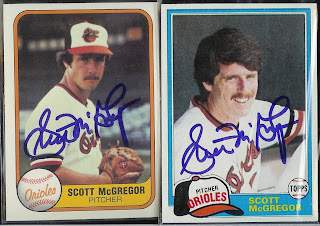 The autographs look very nice, and I'm glad we found cards of his on time! 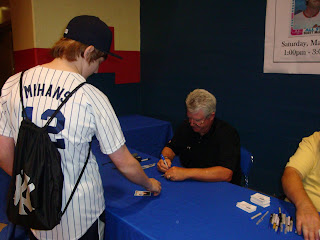 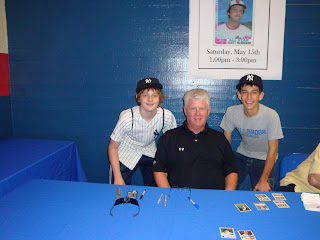 Overall, both guys were really nice and it was a cool experience to meet them. Stay tuned for tomorrow or Monday's next post, which should be a box break, hint= this box was not cold

Tomorrow is my Confirmation, which is a big day for me. Not only because I'm getting out of CCD for life, but I should be getting a lot of money, plus an out to eat treat at the end. The ceremony will be over 3 hours long most likely due to 101 kids getting confirmed at the same time at my church, so that won't be fun, but once it's over it'll be a celebration of the 8 terrible years I lived in CCD class.