Hey guys, Drew back here. Well, since I'm kinda back, I might as well get caught up in trades. But first, I am going to the card show on Saturday as usual, and I will probably meet Billy Williams and Scott McGregor (free). I'll probably make a custom for Williams to sign so he can be in the Hall of Fame Heroes set. One other thing. R.I.P. Robin Roberts and Ernie Harwell, sorry I couldn't get to it I've again been very busy. Winning 20 games 6 straight years is ridiculously incredible, I didn't know how good he was until he died.

Ok, on that note, here are the 3 maildays that I hadn't posted yet, 2 being from bloggers and 1 from eBay. Let's start with Scott of Mr. Scott's Baseball Cards. Scott has been VERY generous in sending me cards, and this was a huge set helper. His side of the trade should be going out in the mail soon. Here's my part: 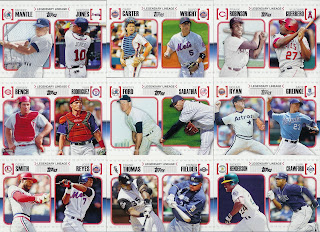 Well, thanks to Mr. Scott I completed the Legendary Lineage set. One less set to chase at the show, and it looks very nice next to each other. The Ford and Sabathia is really nice and I also really like the Rickey Henderson/Carl Crawford. 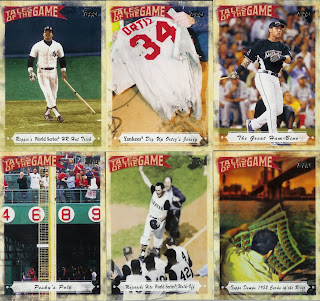 Here are 6 Tales of the Game. I really like the unique cards in this set, not often you find a card of the Pesky Pole, the Yankees digging up an Ortiz jersey and Topps dumping 52 Topps in the Hudson river. I only need 2 more of these now, 10 and 23, if you have them let me know before Saturday, as well as the rest of the stuff I'm posting here. 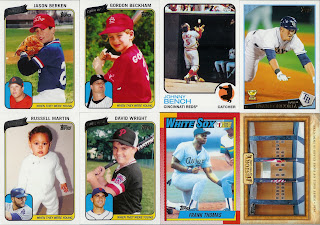 With these 4 When They Were Young inserts, I now only need Justin Verlander. Shoot me an email if you have one. As for as Cards Your Mom Threw Out, check my wantlist, I need about 20 of them still so help is much needed. And for History of the Game I need only Card #19, which is Johnny Bench. 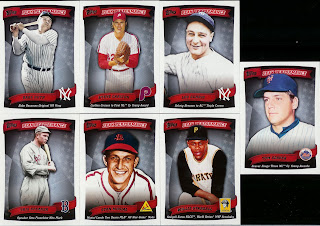 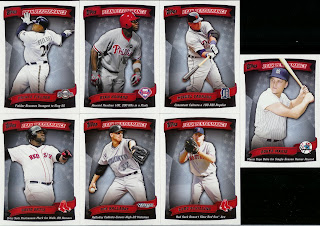 Also, Mr. Scott sent me 14 Peak Performances, including Babe, Lou, and Roger Maris, a pretty good group of players. This leads me to need only 10 more of these to complete the first 50. I do want all these sets mostly complete by Series 2's arrival, which is very soon. 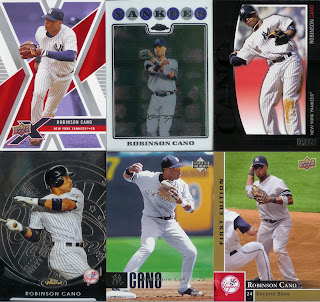 The last 6 cards he sent were all needed Cano's. He owns 145 of Cano's cards, and I now have 122 so I'm slowly catching up. I'm not a fan of 2008 UDX or First Edition or 2006 Upper Deck, but the 08 Chrome is nice, the Unique is pretty nice, and the Finest is incredible looking. Can't wait to get some of those refractors.

Thanks Mr. Scott! Now on to Wicked Ortega of My Past Time... I Love It. Wicked and I had a small little fight back in 09 but we quickly resolved and are great buddies now. We made a trade a few weeks ago and he sent more my way for nothin just a few days ago. Here are the cards: 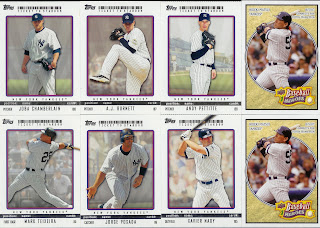 First are just some TTS and Heroes. There is a Pettitte perforated parallel too so that's cool, don't have many of those, although I do think that those should have been the base cards since it IS a ticket set. 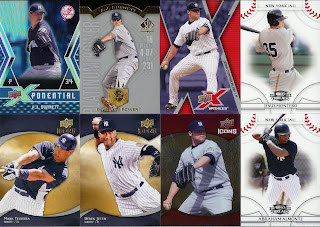 The Tex Icons completes that Icons team set, and as I receive loads of doubles of the same players, I finally get the Tex. Nice Joba parallel too. I didn't have either of the Burnetts and they are both awesome looking, and I always appreciate Jesus Montero! 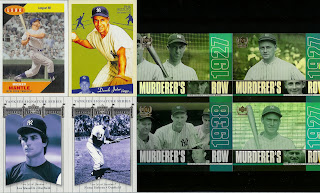 I love those Murderer's Row cards, that makes 5 total for me and I no doubt want to complete that insert set. It's part of that 2000 Yankees Legends set I think, and they have a really cool look to them. 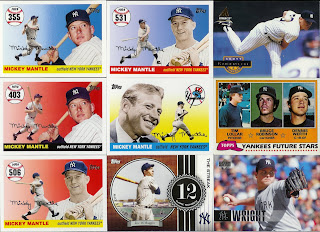 Again, I can't stand 06 Upper Deck but I did need it. A lot of Mantle as usual, Topps really used a pointless idea on the home run cards, yet I still want some of them. I would like at least number 536, his last homer, and maybe the tape measure shot too. 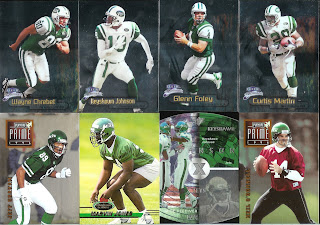 Some Jets were included too and they are really nice, especially the Keyshawn on the bottom row and all 4 of the top row cards have a sweet design. 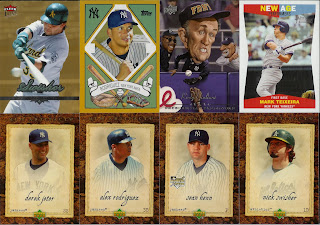 2007 Artifacts is nice, but some of the cards can get boring. The Jeter is really nice though. I also needed the top Swisher, very nice. The Rudy Giuliani card is hilarious too, part of the 2008 Presidential Predictors set. 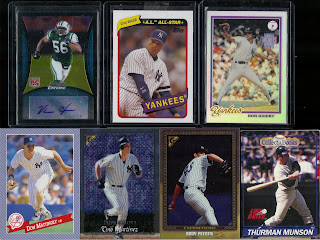 The last picture from Wicked, has some cool cards. First, the Tino is really cool, a Topps Gallery card, and the Thurman is a book, which is really cool. He also threw in a Vernon Gholston auto, which makes the 3rd auto of his that he has sent me. Gholston certainly isn't anything special, but as the Jets are making him a defensive end again like he was in college, he may be better than before. I needed the Cano card, I don't get why his name isn't on the front of the card though. The best card in this package though has to be the Ron Guidry refractor from Topps Archives Reserve 2002. My mom gave me the original 1978 card a long time ago since her brother collected some cards and must've given it to her or something, so it's cool to have a reprint of it.

Thanks Wicked! Lastly, I got a card off eBay recently for like $4, from the new National Chicle product. 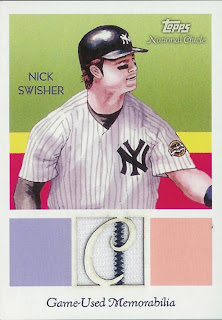 Nick Swisher relic /199. Swisher has been lighting it up lately, so far with 5 home runs in MAY! Go Swish! The only problem on this card other than Swisher being stuck with the manly colors pink and purple is that the C over the game used and the border too is really dirty. I think I've seen more like this. Have you? Here's a pic of the back: 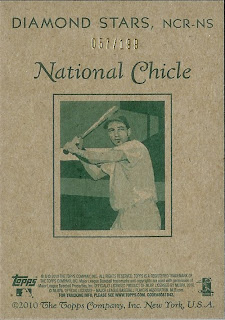 Well that's all for now, I hope you enjoyed that long post of trades (Thorzul in particular). See Ya!
Posted by Drew at 4:32 PM