Mailday and Cards from Dad's Friend

Hey guys, Drew back here. I know I've been a little off lately, but I've got reasons and I guess I'll start now. One is that I've been talking to friends a lot more lately and stuff, two is that I've been busy playing baseball and doing other things, and 3, I've had near no interest in any of the 2010 products so far. Sure once I start National Chicle I'll be addicted, but right it's kinda boring. I kinda feel lost since I've been so busy, and although I still love getting cards in packages I'm in a little collecting hole. But, I wanna break out of it, so I'm gonna try to get back on track.

So, for starters, got some mail lately but first, here is some stuff that my dad's friend from work gave to me. He already gave me one group earlier, and here is part 2, well, the second stack. Pretty nice stuff, here are the highlights: 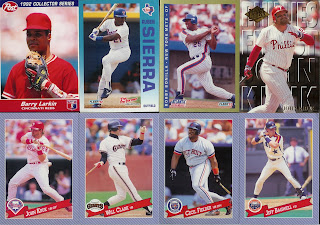 Some 90's odd ball ish cards, of some good players, Kruk, Larkin, Cecil, Bagwell, Bonilla, Sierra, and Will Clark. Not a bad bunch right there. 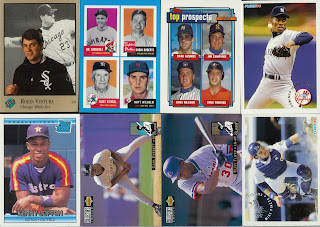 Here's some more 90's stuff including a Ventura, a cool little 4 way with Casey Stengel from 1992 Topps something, a Brad Ausmus RC (who knew he was a Yankee?), a Kenny Lofton rookie, and a really cool shot of Mike Piazza. 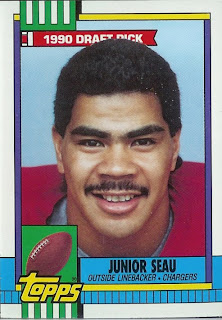 But the best card of the bunch had to be this Junior Seau rookie card. It's not a super valuable card or anything but it's certainly an awesome yet creepy mug shot of a future Hall of Famer! Really cool!

Thanks so much again, some nice stuff without a doubt!

The second and last part of this post is from the mailbox, from Night Owl. By this point you probably know that he and I have been trading buddies, I think this was at least the 3rd or 4th time we've traded, and he came through again! Here are the highlights: 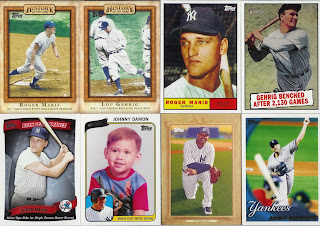 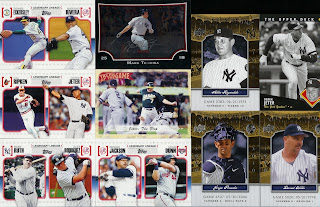 Ok, I'm not doing what I did on the last pic, so I'll say that the 4 Lineages are for the Yankees PC, and the Tales of the Game. I'll never forget Jeter's flip, that was an amazing play. Also, 3 more Yankee stadium legacies, only need like 7000 more haha. The Jeter Timeline insert is certainly a favorite of mine too, what an awesome card! 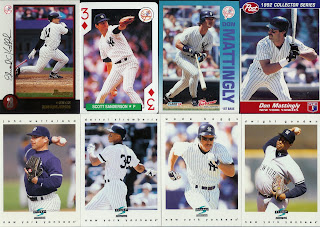 Some 90's stuff, including some faves of mine, Wade Boggs (as a Yankee), Doc Gooden, Strawberry, and Donnie Baseball. Yeah, I know you all know I met him but yeah, I'm going to another show soon but the lineup is kinda disappointing. The Sanderson card is interesting too, never saw one of those before. 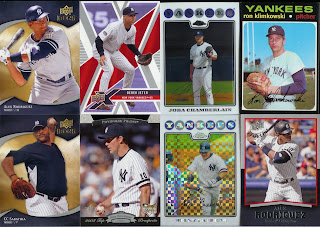 And lastly, some newer ones, Icons of A-Rod and CC, pretty sure I only need the Tex from that set now, an X of Jeter (yawn), a really cool die cut of Ross Ohlendorf, and some other cool ones. That x-fractor of Melky is sweet, I miss him in pinstripes (stupid Randy Winn). The last card I will talk about is the very nice 71 Topps Ron Klimkowski. Although I have pretty much no clue who he is, it's in good shape and really nice. A cool add to the Yankees collection!

I now officially have a sponsor on drewscards! Thanks so much Tristar! Speaking of which, enter that contest now foos!
Posted by Drew at 8:45 PM