Hey guys, Drew back here. So, what you're about to read is explaining the use of my worthless dollars throughout the journey into the jungle that is White Plains.

It's gotten to the great part of our recap again, the part where everything is amazingly nice and expensive! From this point the review has dragged on but it is looking good so far! Lets get started! 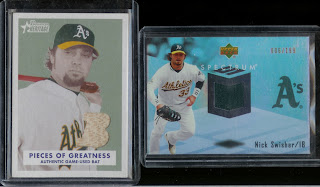 I needed to feed my Nick Swisher obsession and I did it well, in $4 total. I bought a very nice 2006 Bowman Heritage bat card and a 2007 Spectrum jersey /199. The second one is really shiny and the green jersey relic is a plus. 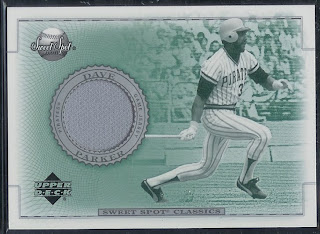 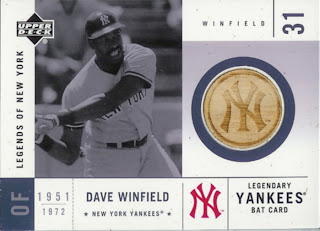 I bought this for I think $5, and it was worth every penny. The engravement in the bat piece alone makes the card, not to mention a Hall of Fame slugger that I once shook hands with. Where? At a White Plains show silly! 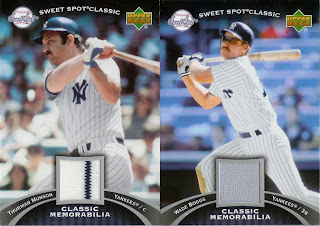 I bought 2 more 2007 Sweet Spot Classic relics at the show to add to my many already, and I'm very happy to own them. Boggs was a great player who is very undervalued in the hobby, and Thurman could have been a legendary player if not for his sad airplane crash in 1979 that ended his career, and his life. This is my first Thurman relic, and it will most certainly not be the last! 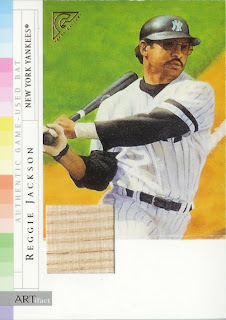 Although Beardy certainly hates my Yankees to death, he must like this card. In fact, from this very same set he pulled this beauty. But yeah, from what I heard this is a short print and hard to find, so for $10 I bought my 3rd Reggie relic! What a great looking card though, and an auto in that blank space would look fantastic. But if I'm getting a Reggie auto, it's gotta be a framed picture! 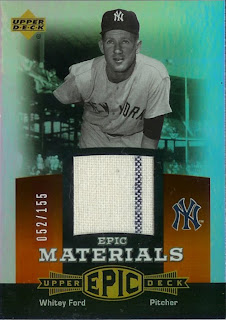 Concluding the relics I bought from the show is this. Numbered out of 155, out of the great 2006 Upper Deck Epic set, is a beautiful Whitey Ford game used relic with a nice pinstripe. For the price I payed on it you can't go wrong, and I'm very excited to own this! 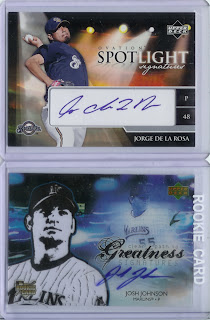 Since relics are done now, time for some autos! How about a $2 Jorge de la Rosa and a $5 Josh Johnson RC auto to start them off? Rosa is on one of my two fantasy teams, and Johnson is on the other. Hopefully de la Rosa recovers from his injury soon, because he was pretty great to finish his 2009 campaign. Johnson is a mainstay on any Drew fantasy team, I'm a big fan of his, and this is a very cool card! 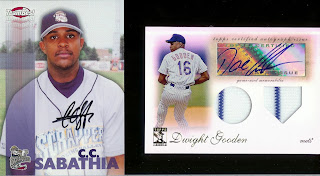 These two cards were both $15 each, and again, in my opinion, very much worth it! The first one is a CC Sabathia 1999 Team Best Minor League autograph! Sabathia is one of my favorite pitchers and he's a great one. Through 10 seasons in the bigs so far, he has a career W-L of 140-83, with a career ERA of 3.61, 1633 strikeouts, and a World Series Ring (hopefully more to come)! I think someone of this greatness needs to be more recognized, but in a way, it's kinda nice to pick up great cards of a great player for dirt cheap!

The second one is a 2009 Tribute Doc Gooden dual relic (pinstripes on both) auto numbered to 99! Gooden has had his off the field issues in the past, but was a great pitcher back in the day! 2009 Tribute is one of my favorite sets, and this is now my 3rd card I've bought from it! The shine and refractor-ness is really really nice, and I enjoy looking at the cards for hours! (not that long, but close)

And the final card I have to show in this post... 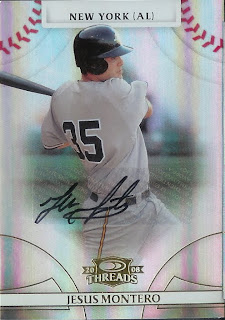 JESUS! Jesus is a top ranked prospect if you didn't know him already, and his cards sell for high prices since everyone thinks he has excellent potential! I bought this for $20, which is not bad, especially if he works out! It could be a steal! It's numbered ONLY out of 975, and the sticker is crooked, but I'll take it thank you very much! Let's now hope and pray that he works out!

Stay tuned for the last 3 big finales of this spectacular day! See Ya!
Posted by Drew at 6:57 PM