Hey guys, Drew back here. We are making our way into Part 4 of many, and I hope you're enjoying these so far.

This may be a broad name to start this post, because I do have plenty more after this, but from this show, my dad bought me a ton of cool cheap Yankee cards which could add up. So, again, thanks dad, and let's continue. 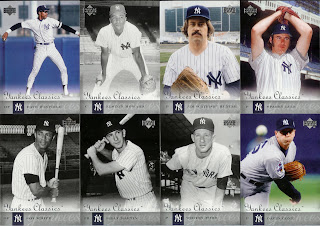 I bought these cards, along with the next few from this set. I got them for 10 cents each and that added up to 2 bucks. So, if you're a math wiz, then you know that I bought 20 cards (sarcasm intended)! 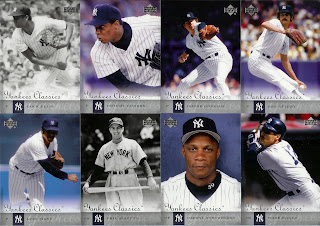 I really like the looks of these, but since I have a lot to write about, I must continue. 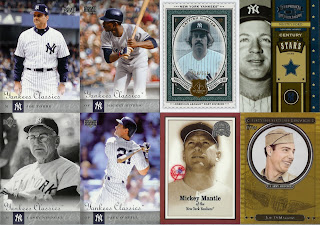 So, 4 more are from that set and the other 4 start the wave of cards from dad! The Catfish is an SP from 09 Legendary Cuts (/550), and I love that design and that card. The Whitey Ford is one I haven't seen before, numbered /1500 and very nice. The Mantle and Dimaggios are cool too. 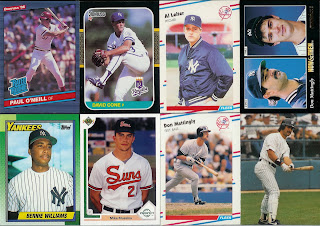 All old school here, including some nice rookies of Paul O'Neill, David Cone, Bernie Williams, Al Leiter, and Mike Mussina! Then some cool Mattingly's that I didn't have. 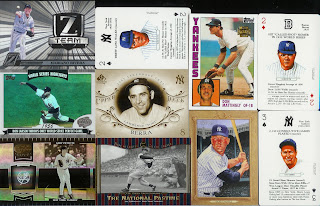 Next are some cool horizontals and a few others, including 3 of many Gehrig or Ruth playing cards. Never seen them before but they are really neat. The Rivera in the upper left is cool as well as the Larsen and Pettitte numbered to 599. 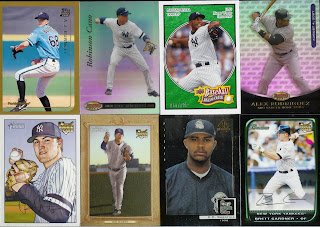 Dad found a nice upgrade for my A.J. Burnett rookie in the rookie collection, and added a few more rookies for my Phil Hughes mini collection. Also a nice Gardner rookie, a CC rookie, a Rivera /499, a Cano, and a sweet A-Rod from 2007 Bowman's Best. 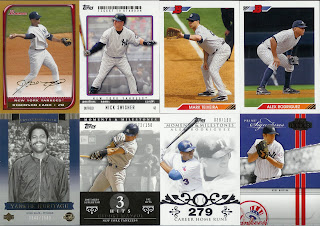 I bought the top row here, some 2010 Bowman inserts of Tex and A-Rod, which by the way look really nice, and a Swisher and Cano. On the bottom are the last 4 here from dad, all numbered. The Dock Ellis is to 1500, the Matsui to 150 from the never ending Moments & Milestones set, an A-Rod to 150, and a Moose that would look great signed /2500. 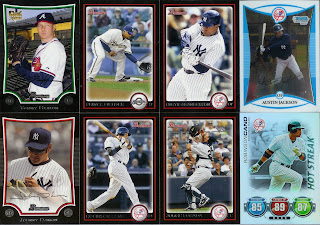 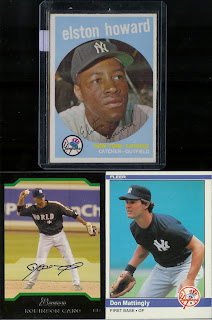 Finally, these 3 great cards I bought will round out this post. Actually, my dad bought me the Mattingly rookie, which is nice, so now I just need the Donruss. I got a 50 cent Cano rookie even when he's hitting well, and for $5, an Elston Howard 1959 Topps is a complete must buy! I have barely any 50's cards but this sure is a nice one.

Hope you liked them, cuz they'll soon be locked up in the vault that is my basement! See Ya!
Posted by Drew at 5:04 PM