Hey guys, Drew back here. Today I just wanted to catch up a little bit, tomorrow I do have a little review for you and giveaway, so stay tuned for that. This morning we had our 7th game and got our 7th win, final score... 31-0! Ha! I was 1-2 with 3 walks, so I feel like Nick Johnson for the last 3 games. Well, that isn't such a bad thing in little league though at least. Ok, here we go: 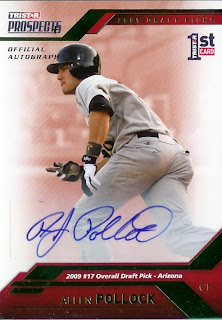 First up is a nice little contest package from Offy's Sports Site. I won one of his contests a little while ago and here is the card I chose. Allen Pollock is the 2009 #17th overall pick by the Diamondbacks, and this card is numbered /25. If this guy turns out to be good, this could be a great card of him! There isn't much about him online and it's for trade right now, but if nobody wants it then I'll hang on to it. 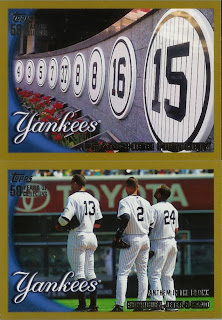 Offy also included 2 2010 Topps gold cards that I wanted from one of his flagship breaks, and they're really nice. One is for the Cano collection too, so thanks! 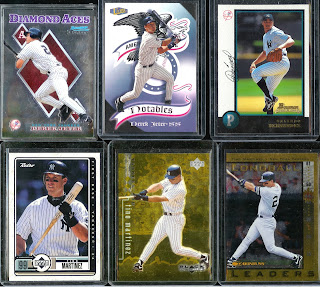 Here are 6 cards that I got from my dad today. After the game we went to this little store and they had some cards and I picked out these 6 for 2 bucks. 2 nice Jeters, an El Duque rookie, and 3 Tinos. The second Tino on the bottom row is numbered to 1,500 while the third is numbered to 5,000. Very nice! 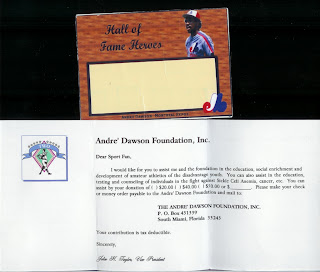 Lastly for now, a beautiful price list from Andre Dawson. This is the first time I've heard or seen him charge although I did know that people were including some cash. He now wants $20 for cards alone and higher for other things. I guess he can do that since he's a Hall of Famer, but whatever.