Mail from Night Owl and BigD!

Hey guys, Drew back here, after getting back from Lake Minerva earlier today and hanging out with Mike for the next few hours. We opened our box of 2009 Donruss Threads football, and you should expect a review coming soon to drewscards. It was actually a nice box-to say the least. So, my family and I had a great time up there, spending time gorging down Chips Ahoy (that was me :p), and kayaking on the lake. So, anyway I'm back, but still can't post at an extreme rate anymore, because

So, starting with my mail over the trip, which I received right before I left, and in this guys case, the cards were on his way back to him as I headed more towards his headquarters. I took them up to the mountains with me, so I could stare at them the whole time. The first one is coming from the Night Owl! 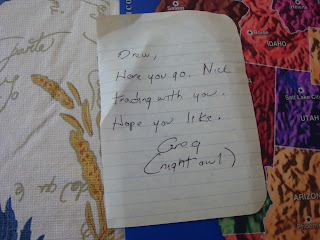 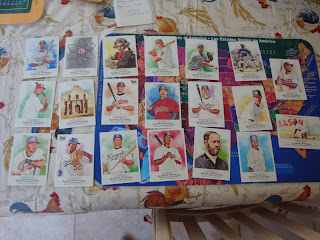 20 2009 Allen & Ginter base cards to knock off the set! My favorite is the Pettitte obviously but I also enjoy the Electron, Beethoven, Alamo, and I liked the Jimmy Rollins card too. Thanks! 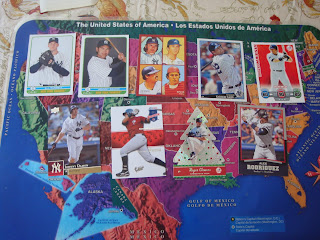 And wait, there's more! 9 mixed Yankees cards that I need! Here is a small list of these:

I needed all of those! I got my 1st cards from the Throwback set, which has a cool feel to it, Tristar, which is nice as well, and the Christmas Tree is awesome looking although I never have seen them before! Thanks for the trade!

The second trade I recently received was courtesy of BigD from Hey, That's Mine! Here are the photos of stuff he gave me: 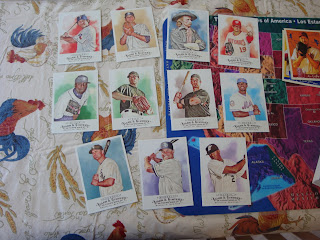 11 Cards for my Allen & Ginter set: I love the Custer card, and the Konerko and Reyes cards are very nice again! Thanks for those! 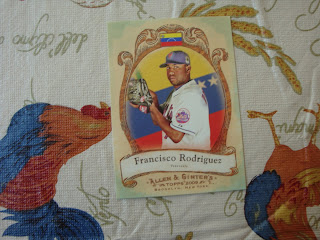 That's not all! I got the National Pride (number 14 in fact) of K-Rod, very nice! Pretty far into this set too, will get it done! 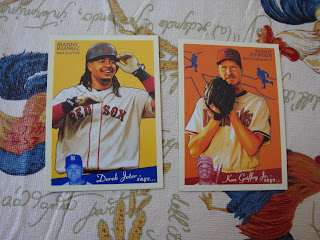 2 2008 Goudey cards I needed, one of Randy Johnson and Manny Ramirez! 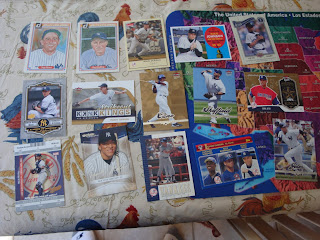 Wow, I needed a ton of those! I noticed in the Topps AL Run Leaders card that the Top 5 on the list on the back had this: Soriano/A-Rod/Jeter/Giambi/Damon in the Top 5 that year, all Yankees! I love the Ruffing and Yogi cards and the Jeter is great! Thanks for the trade!

Thanks for reading, and stay tuned for the Threads review! Off to 8th Grade!