Hey everyone, Drew back here! As you can see from the post title, I am taking a day off from talking/thinking/writing about baseball to focus on the conclusion of what I believe has been an excellent 5th season of my favorite show, The Walking Dead. I've been thoroughly enjoying this season, and I think it's safe to say that it, along with Game of Thrones, are the biggest shows on TV. I have yet to get into Thrones, as I am currently discovering Lost, but it is next on my TV show agenda! 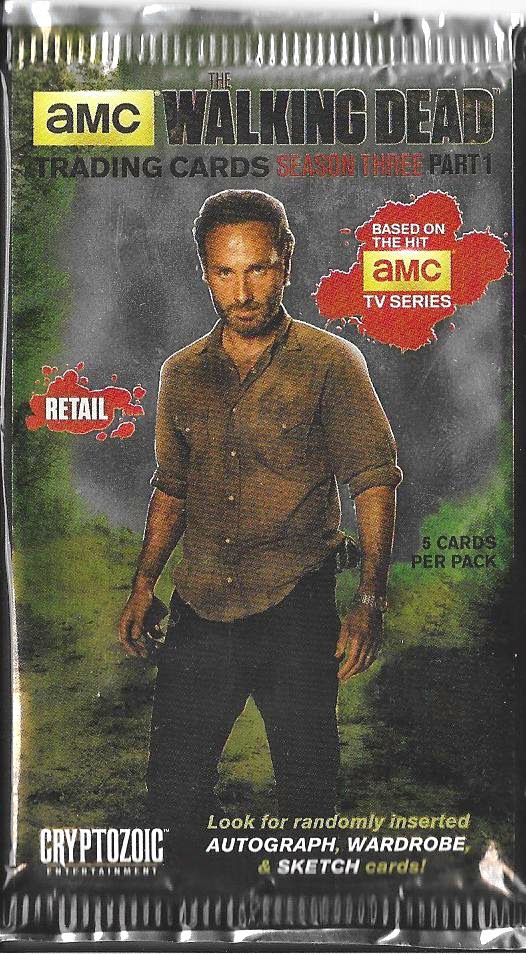 About a week ago, I picked up my first two packs of the Cryptozoic Walking Dead card set at Target! I have seen these here and there online but never saw them in stores, especially by individual packs. I didn't expect to pull any big autos or relics, but just wanted to get a taste for the product.

*SPOILER WARNING: If you have not seen up to the end of Season 3 of The Walking Dead, and don't wish to have the show spoiled, do not continue reading* 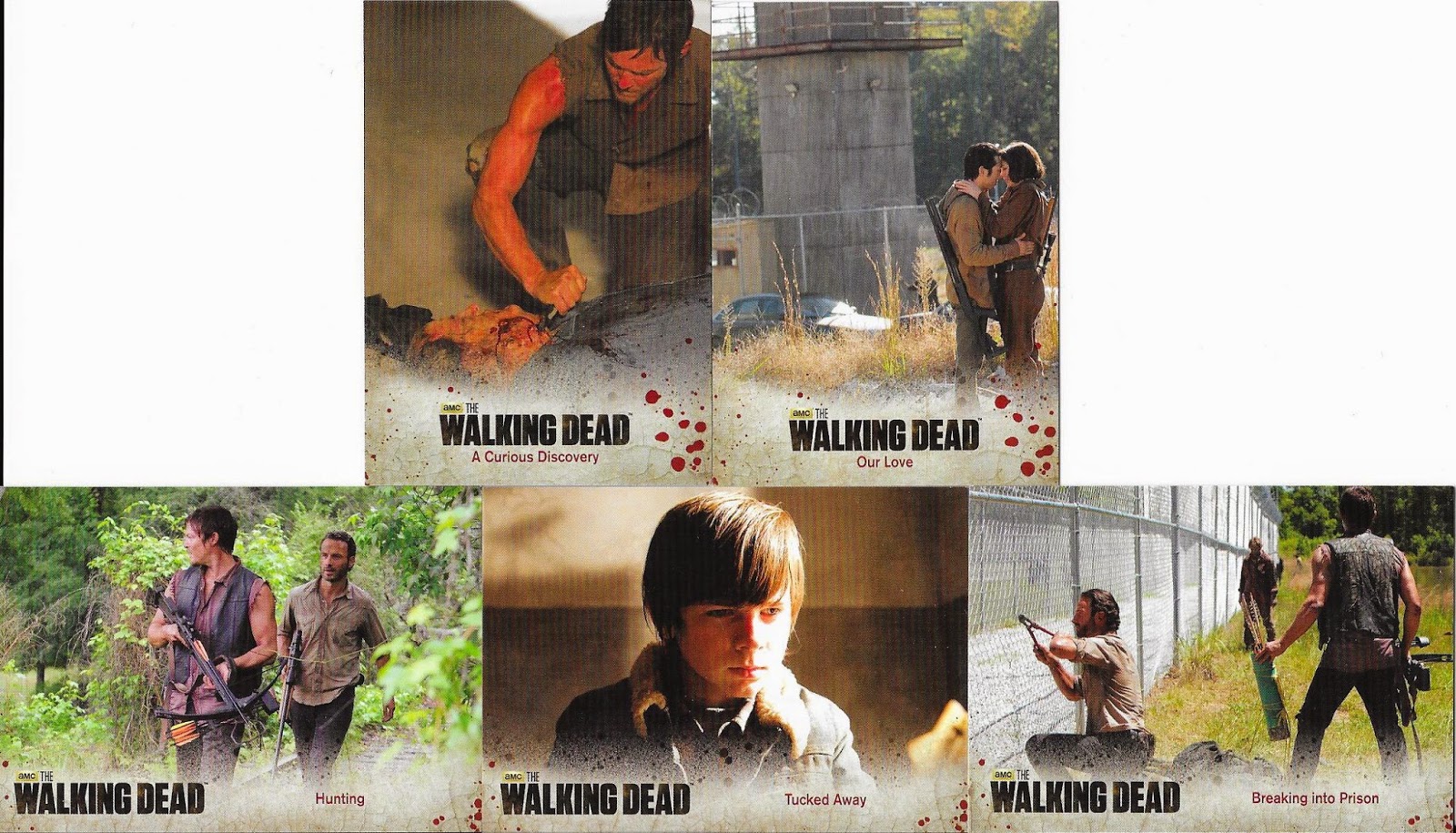 There is nothing overly special to this card set, as it draws similarities to just about any other pop culture card set. However, as a fan of the show, it is cool to get to relive some of its earlier moments, especially through one of my favorite outlets; trading cards. I love the card of Daryl (Norman Reedus) and Rick (Andrew Lincoln) hunting in the woods together. Season 3 may be the most disputed season among fans, but I personally really loved the Governor's story arch and couldn't get enough of it. I also really loved how Merle emerged at the end of his life, and seeing Daryl have to put his brother out of his misery was an absolutely heart-wrenching moment. If there's one bright spot to the show, it's Glenn and Maggie's relationship, which I pray does not end tonight. Glenn is the most underrated character on the show, and I would hate to see him succumb to the walker masses that are about to strike Alexandria. 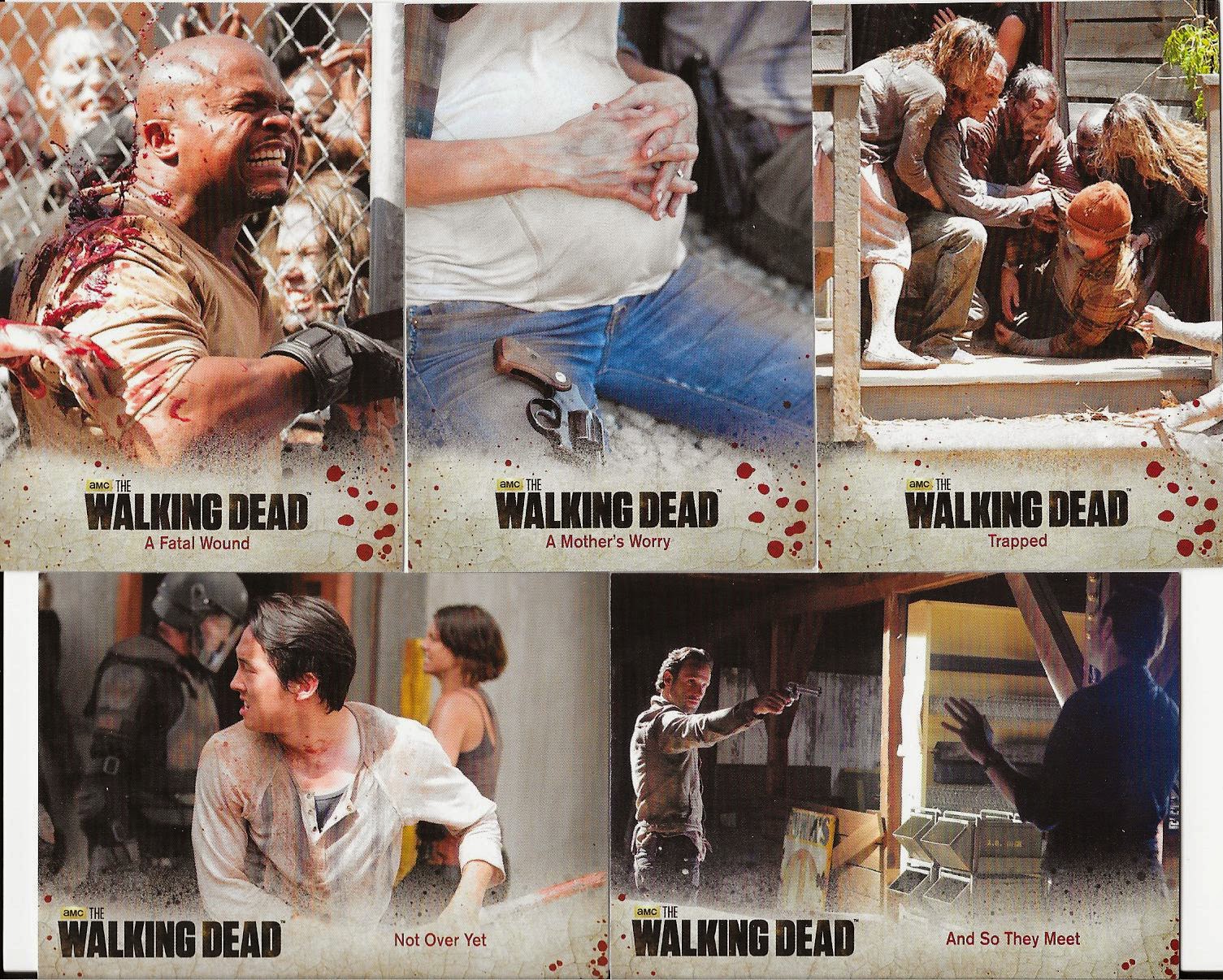 I thought the T-Dog death card looked so cool, and I wasn't particularly crazy about the character either so it didn't exactly bring me to tears. T-Dog's role in the group was minimal, and while he was likeable and funny at points, I don't miss him all that much. My favorite card between the two packs was definitely the first standoff scene card of Rick and the Governor. I remember feeling the suspense in that moment, and begging Rick to just kill the man and put an end to it. But Rick is a better man than I, or maybe it was simply because he didn't realize how dangerous the man with the eye patch was.

There isn't anything special to report about the product, but I think they look cool personally since I love watching the show for its characters. Some of the story archs (Beth in the hospital) haven't been overly entertaining, but the connection you gain to the survivors is what makes the show brilliant. Some have said that "it's the best show about nothing", and I get that since it moves at a relatively slow pace. It may dissolve in mainstream interest over the years, but that would simply be because some viewers don't take the time to understand the importance of every single scene (because even filler episodes contain important plot elements you may not catch right away). Last season, a lot of people complained about the back half of the season, especially the episode in which Daryl and Beth find an abandoned cabin in the middle of the woods and hang out. It wasn't all that fun to watch then, but some of what Beth said in that episode tied together in this season.

*SPOILERS: If you haven't caught up to the Walking Dead and wish to, do not continue to read*

As for tonight's episode, I have been so nervous to see how things play out. I'm looking forward to hopefully seeing Morgan make his long awaited return to Rick and the Survivors, and hopefully it will come about in dramatic fashion. Rick very well may be exiled from Alexandria, but that won't be close to the end of his time there. He knows the Alexandrian people are weak, and that he can take over if it came to that. Understanding what's going on in Rick's mind almost makes you want to like Shane and the Governor more, who knew what it took to survive before Rick found out for himself. If Rick never got into a coma, chances are he could've and would've been quicker to fire his weapon and take charge then he was earlier in the show. His character transformation has been amazing to see, because we can see so much of other characters in him now and that he's too far gone from ever being able to remain civilized for a prolonged period of time.

If I had to predict who could die tonight; I think Pete is a shoo in. He's not going to be happy about what took place between he and Rick last episode, and well, no matter what he does, he's not going to win this battle. As crazy as Rick sounded last episode, it all made sense. We all hoped with Rick in prior years that doing the moral thing would result in being able to overcome the Apocalypse, but we now all see that in order to live, you need to be willing to do whatever it takes. Whoever is a threat needs to be taken care of, especially for Rick, who is ultimately trying to protect his son and daughter. Even strong survivors such as Tyreese couldn't survive because he wasn't willing to make that life adjustment.

I also think we're going to see a huge character death, and I have a bad feeling that it will be one of our 5 original characters. Rick and Carl are safe in my eyes, as there is plenty more of a story behind their characters. I think the show will last between 8 and 10 seasons, and it wouldn't make sense for them to die halfway through. It will be one of my 3 favorite current characters; Daryl, Carol, or Glenn. All three could be in danger tonight at some point, and I'm particularly worried about that Nicholas douchebag who we now know is wielding Rick's gun.

Tonight is going to be crazy, and I can't wait to see what takes place. The episode is 90 minutes long, which is a nice treat and will almost feel like a movie! To say I'm excited is an understatement!

I hope this post reached some Walking Dead fans out there in this blogging community, and if not, oh well. I write on this blog mostly for my personal enjoyment of writing, but being to able to share my thoughts and opinions with you all is a blast too.

With all that in mind, any of you have any death predictions? Enjoy the show tonight! 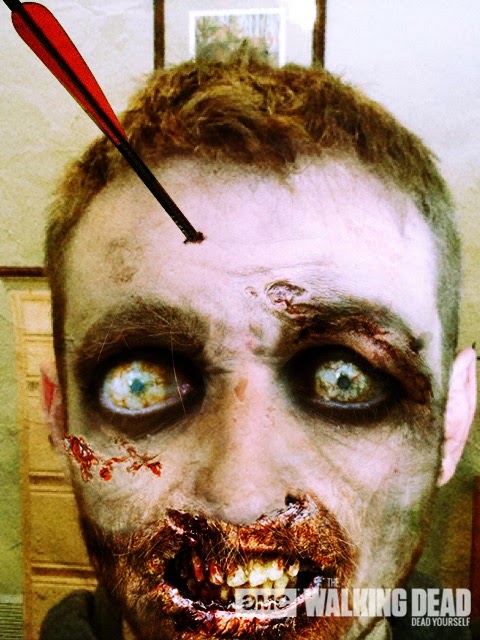