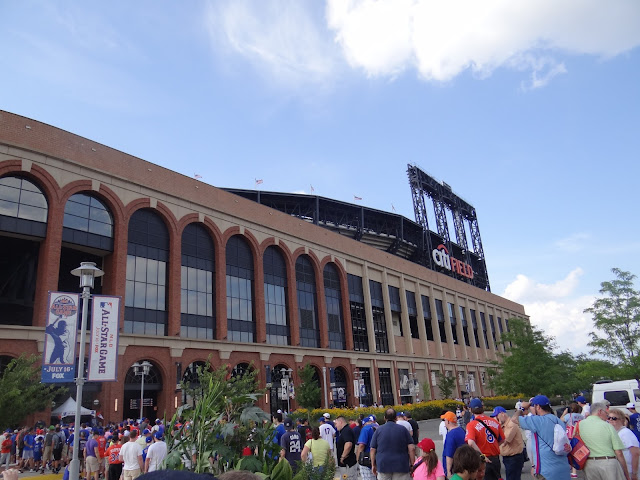 Hey guys, Drew back here! I explained at the end of my last post that Mike, Vinny, Dad, and I's day was far from over as we left Fanfest. To go along with that quest, we also all bought tickets to attend the 2013 Chevrolet Home Run Derby at Citi Field in Queens! I believe that the derby is the marquee event of the All Star break, simply because the All Star Game itself hasn't been exciting since the extra inning affair in Yankee Stadium a few years back. The tickets weren't cheap, but I thought it would be a once in a lifetime chance to see some of the best hitters in baseball go deep before my eyes! The night of the derby is also the All Star Workout day, so if your favorite player isn't necessarily competing in the event, you may at least get to see them take some swings in the cage, which for some players can be more entertaining than watching them during the game the following night! 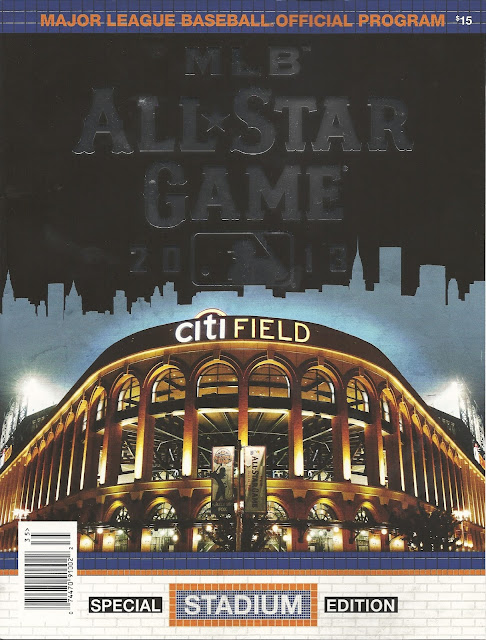 As we arrived at the stadium, a few of us bought the exclusive All Star Program for sale, which had the full All Star rosters among a scorecard and many other things. As we walked in we were also given a bag filled with pamphlets, a towel, and a few other small items. We originally wanted to try graphing at the stadium, but we were so exhausted from Fanfest that we just wanted to sit down and take it all in. I had never been to Citi Field prior to the event, so I used this event to get a taste of the ballpark and take in something other than Yankee Stadium air for once! 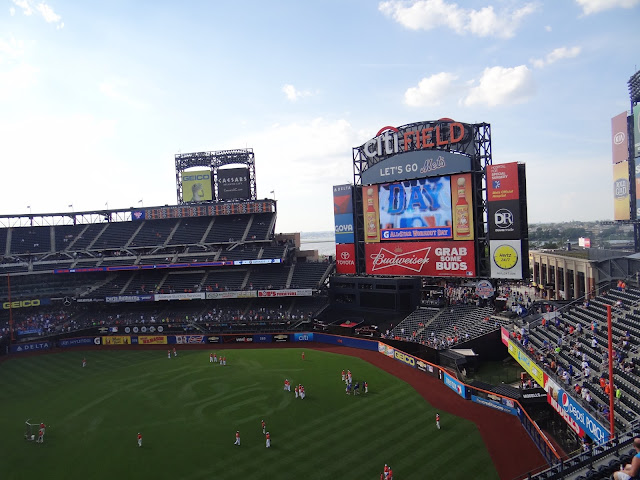 As you can see, it was a beautiful day, although I must say until the sun went down it was brutally hot out. Our seats were in the first row of the promenade section, and they were perfect for viewing the entire field and seeing the ball fly out of the stadium! We grabbed some food and picked up some merchandise, but spent the rest of the workout watching our fantasy players and favorite players take some cuts! 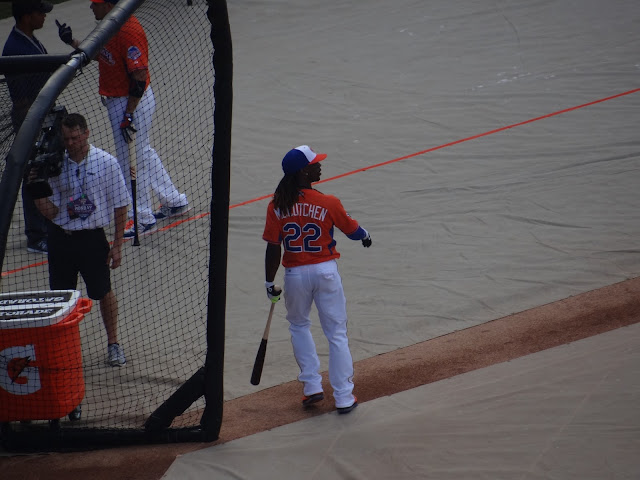 One of the first players we saw in the batting cage was someone who had earlier on been feet away from us, Andrew McCutchen. In retrospect, it was awesome getting to see "Cutch" entertain the children for the event, but I think I'll always remember getting the cold shoulder from him when I was literally standing two feet away from him. However, I'd like to say the security really interfered with the situation, so I'm going to try and forgive Andrew for their ridiculousness. 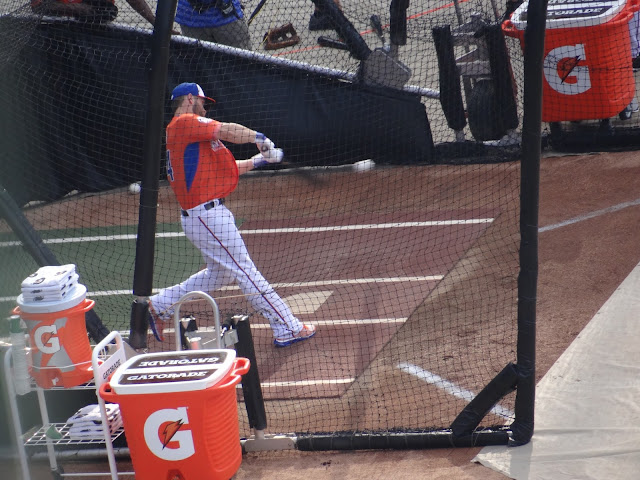 Bryce Harper jumped in soon afterwards! Originally, I wasn't a huge Harper fan, because he seemed arrogant and stuck-up. However, I've grown to love his passion and attitude for the game! He's always an exciting player to watch and I was pumped to see him in the Derby later on that night! 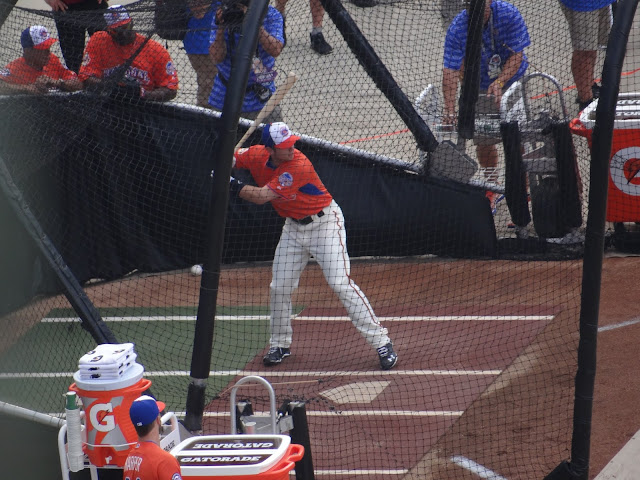 How can you be a baseball fan without loving Buster Posey? He's done it all already- won 2 World Series, an MVP, NL Rookie of the Year, made 2 All Star teams, and caught a perfect game! Yadier Molina may one of my favorite fantasy baseball catchers in recent years, but Posey is still my favorite all around catcher in the game. It was great to see him take BP, because I won't be seeing a Yankees-Giants game anytime soon. 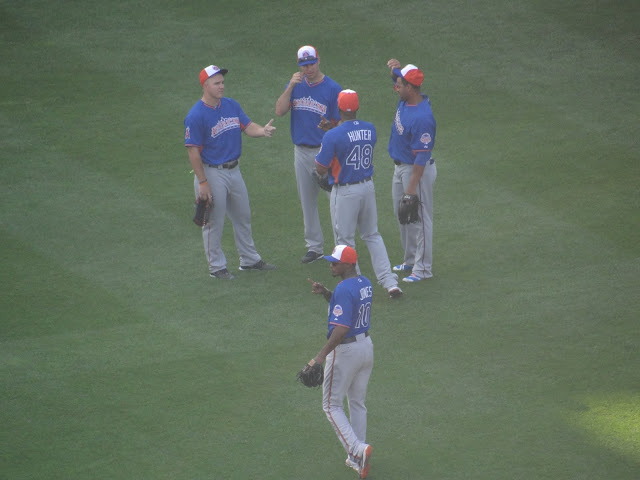 I was a bit disappointed that I wasn't invited to this all exclusive VIP club in center field featuring Mike Trout, Joe Mauer, Torii Hunter, Nelson Cruz, and Adam Jones, but I guess I'll get over it. It was cool to see players of various teams interacting and having a good time, and it was a reminder that business is still a little kid's game through it all. 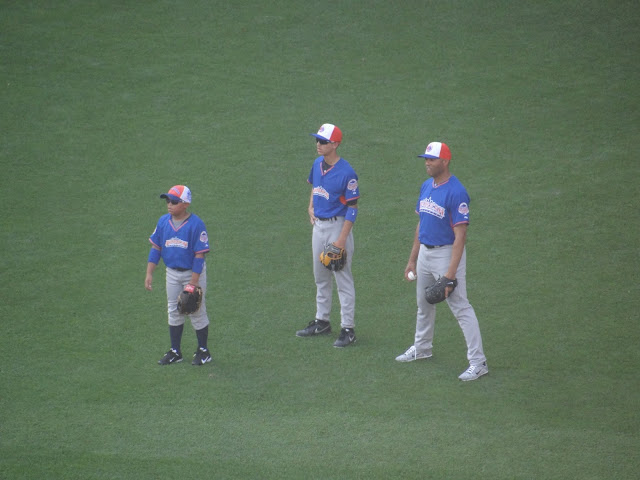 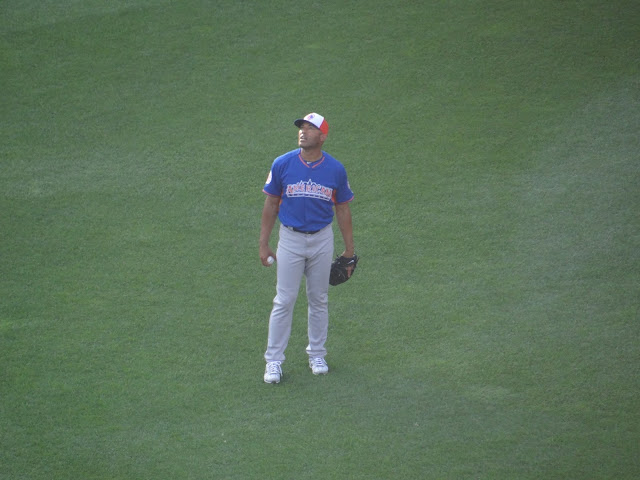 Speaking of kids, my all time favorite pitcher Mariano Rivera was out in the outfield playing catch with his two sons. I was a little nervous seeing Mo throw in the outfield, but fortunately his older son caught by the outfield wall, while he was closer to the infield. I'd love to see him finish his final year injury-free. 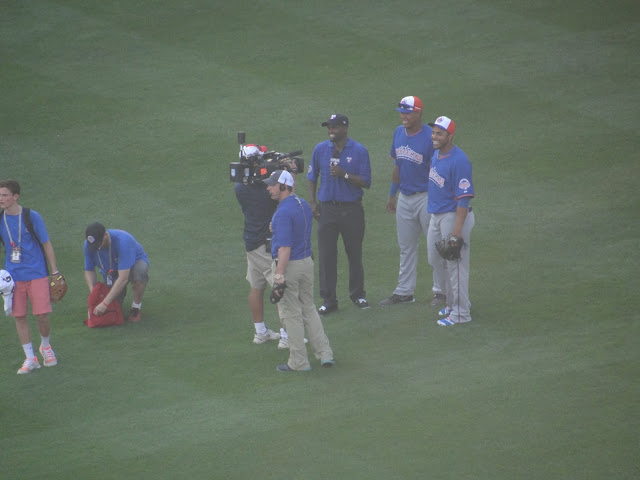 I found you, Harold Reynolds! The former second baseman and current MLB Network analyst was out roaming about the outfield interviewing numerous players, and I caught him talking to Salvador Perez and Nelson Cruz. I really enjoy Harold on the MLB Network, so it was neat to get to see him in person. 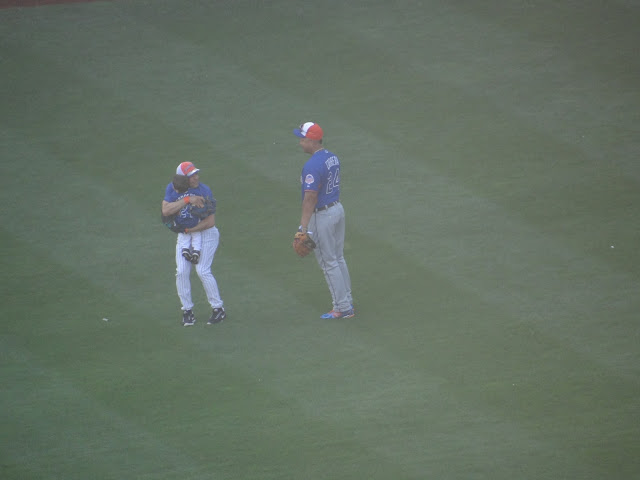 When you take several hundred pictures at an event, you're bound to find a picture or two that makes you question "what on Earth is going on?" Well, it appears that Miguel Cabrera lost his child to someone I cannot identify, and he doesn't look he's very motivated to take him back! Too funny. 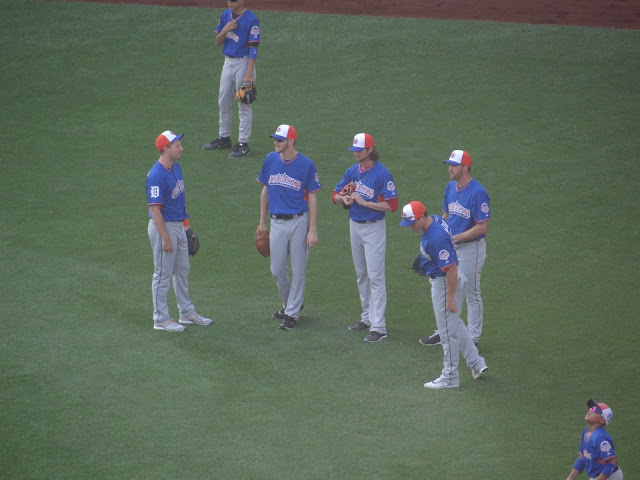 I don't know which club I'd have a better shot of entering- the one earlier on, or this group of excellent young pitchers! By the warning track in center field stood Tigers aces Max Scherzer and Justin Verlander, along with Boston's Clay Buchholz, the ChiSox's Chris Sale, and Tampa's last minute All Star addition Matt Moore! I could only imagine what these guys were talking about. Did you see Adam Dunn's swing on my curveball? 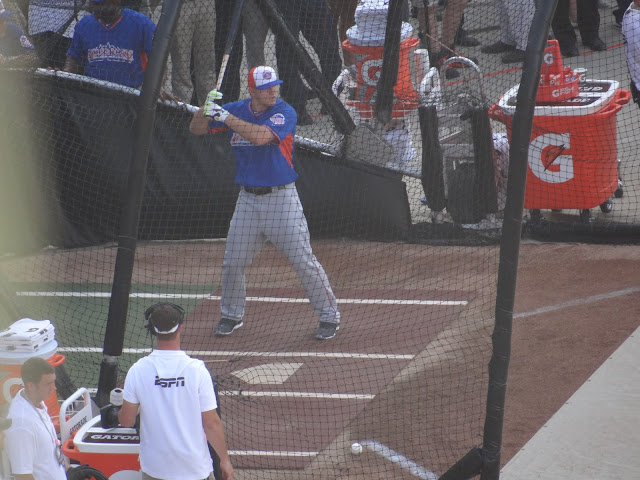 Mike Trout. There isn't much else to say. This guy is must-see TV. 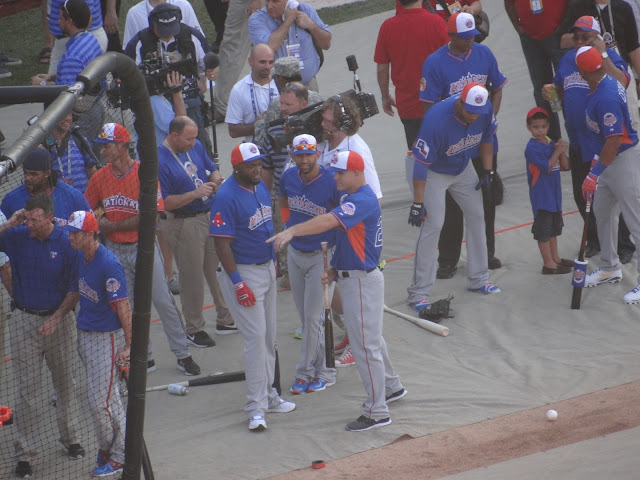 In case Trout had a little bit of room to improve, Big Papi and Joey Bats could certainly fill up that empty space in his game. Bautista has been one of the most entertaining players in the past few years, and not even this Yankee fan can say that I hate David Ortiz. Sure, he cheated, and sure, he's murdered the Yankees many, many times, but there's something about the guy that you really have to love. 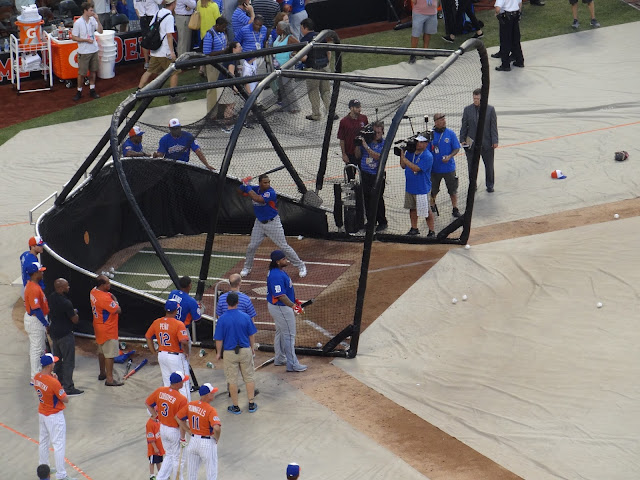 But while all of those All Stars may be pretty good, this guy in the cage stole the spotlight under the bright lights! The lone player in the Home Run Derby not on the All Star team, Yoenis Cespedes certainly went on to make his presence felt as the night went on. Tomorrow I'll wrap the night up with pictures from the actual derby! I hope you all have enjoyed this series!