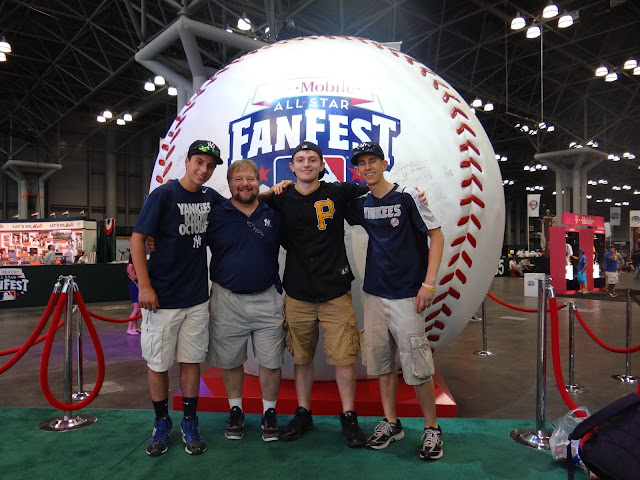 Hey guys, Drew back here! Well, considering this is a continuation of the past few posts, I'm left without much else to say. Enjoy what's left of our adventure! 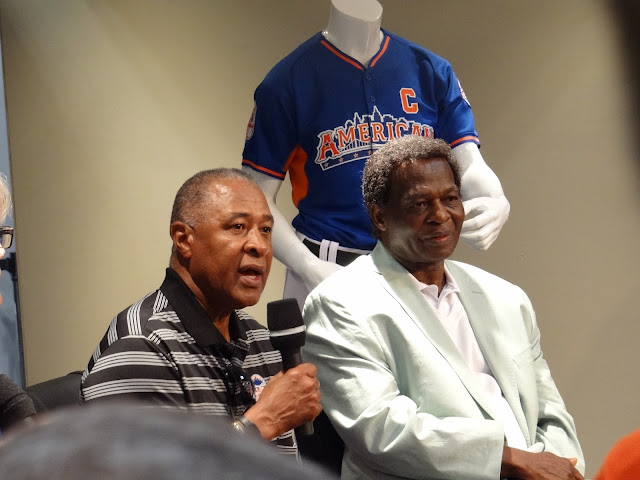 I left off yesterday after I was able to add George Foster to my signed baseball collection, and from that point forward I was relatively content. Just kidding, because if you could identify either or both of the men above you knew I was hungry for some more signed balls. I came across a Q&A session in the clubhouse with none other than Cardinals legends Ozzie Smith and Lou Brock! I listened to a very small amount of the conversation, as I was more focused on trying to prepare for their exit. I overheard the security guards say that they would go out the back entrance, and considering I thought I knew the place, I headed over to this "back entrance". Sure enough, they left out of another door, and I was left chasing down Ozzie Smith along with an enormous mob of people. Smith was in the midst of signing a few autographs when security told him to stop signing, and he seemed a little annoyed about that. 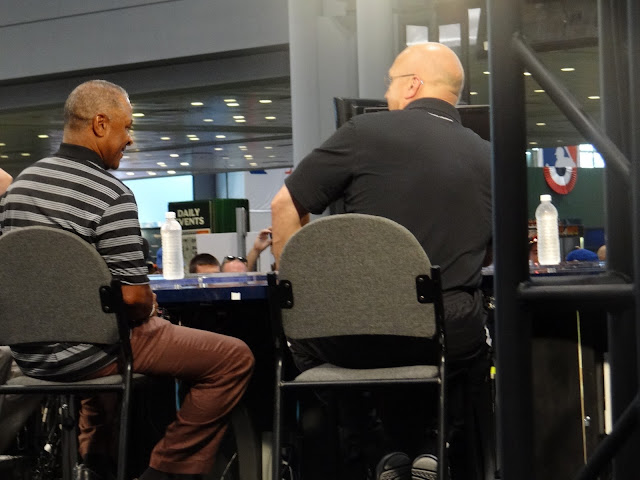 He wound up joining Cal Ripken Jr. at the MLB TV station, where we had previously gotten Frank Thomas and Jack Morris. But, since Ripken had already been sitting there, we were camped out way in the back of the enormous crowd. I decided to leave because I figured it was all a lost cause, but Mike and Vinny decided to try a little longer. They were unsuccessful again, unfortunately. 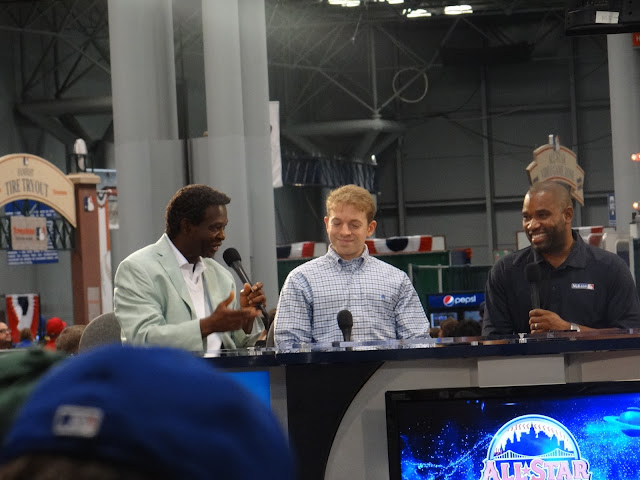 By the time I came back to the station, Ripken and Smith had exited and Brock was being interviewed. But, the huge crowd was still there, so I again, decided to leave. Dad and I went for a little stroll around the building, and all of a sudden we caught a monster roaming around. Andre Dawson was walking around in the store with security guards, picking through some shirts. When he came out from the aisle, I politely asked him if he could sign for me, considering there weren't many people around. Before Dawson had the chance to open his mouth, the security guard said "No, he can't". Andre gave me a look as if to say "I would if I could, kid". It was really disappointing to see the security as difficult as it was at the show. I mean, had they been more open to allowing players to sign at FANfest, I may have been able to go home with signed balls of Ozzie Smith, Andre Dawson, Andrew McCutchen, and quite possibly Cal Ripken Jr. I understood that players have schedules and what not but I didn't think it could've killed Mr. Dawson to sign one ball in a relatively empty store. Whatever.

Dad and I came back to the MLB station to find Vinny and Mike, and as we came across them we also came across a familiar face entering the building, at least for me. Mike, Vinny, and Dad had no idea who it was, but I knew the face when I saw him. Mr. Marlin himself, Jeff Conine! Conine was a solid player in his day, and I guess he decided to show up for some particular reason (we didn't follow him around). Before he entered the room, he signed for Dad and Vinny, because Mike and I didn't have anything to really add him on. Conine would be the last player to sign for my Dad, so he left with this beautiful custom made (by me) picture of Citi Field celebrating the All Star festivities! 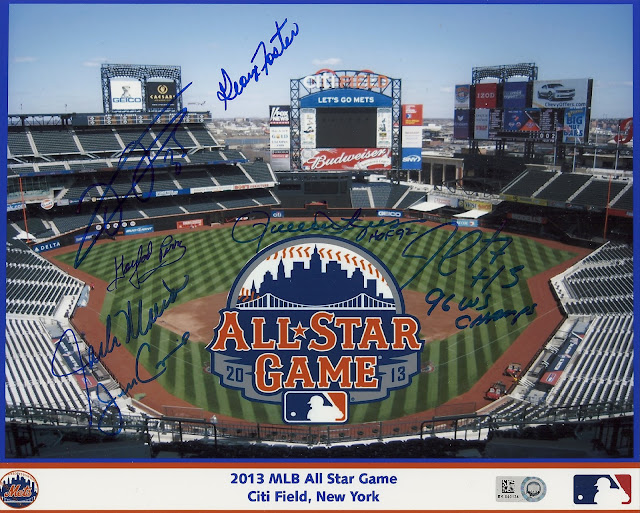 The picture is signed by Frank Thomas, Gaylord Perry, Jack Morris, Jeff Conine, Jim Leyritz, George Foster, and Rollie Fingers! Leyritz' autograph came with the MLB authentication sticker, so it made the photo look pretty legitimate. I'm glad I decided to customize a picture, because it sure did come out nicely, even though nobody signed to like the right field bleachers. I'm planning on framing this and hanging it up, in commemoration of the event!

Following Conine's autograph, we decided to start wrapping things up. Since the building had been basically divided into two huge rooms, we finally got to check out some of the side we entered through. Most of this side was composed of memorabilia/card dealers and some exhibits/fun family activities. However, ESPN Radio was also staged over on that side, and it had previously had Gaylord Perry and Tim Teufel as free signers earlier on. My favorite author Mike Lupica was doing his radio show earlier as well, but at the time we got there his show was long over. Instead, Don La Greca and Yankees announcer Michael Kay were doing their show! I have grown up with Michael Kay as the Yankees announcer, and since he's about 100 times better than John Sterling, I've always respected him. He isn't Bob Uecker or Vin Scully, but he definitely holds his own and knows what he is talking about. 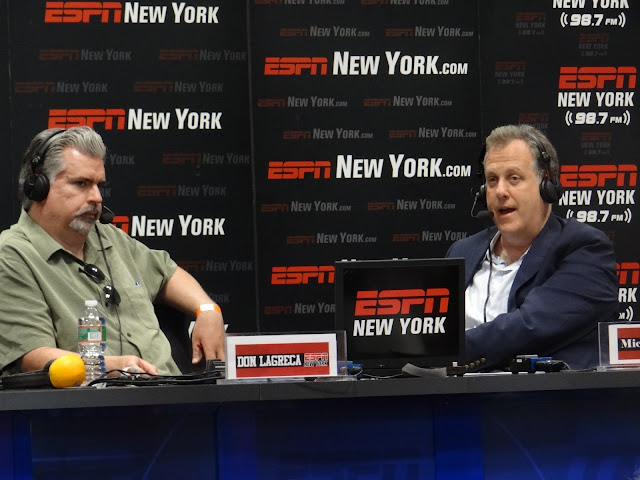 A fan standing to the side of the booth waved to Mr. Kay during his break as if to grab his attention for autographs, and Kay gave him the "one minute" signal. Mike, Vinny, and I joined in behind the fan in line, but we knew we had to hurry because he probably would have to go back on air shortly. However, we all got a chance to go up on stage, greet him and talk to him. Unfortunately this was where wearing a Pirates jersey did me wrong, but I explained to Michael that I wore it to get McCutchen's attention and that I'm a diehard Yankee fan, and that I really enjoy listening to him. He was really cool about it and appreciative, and he signed my ball on the sidepanel. It still looks pretty awesome to me, but say what you want! 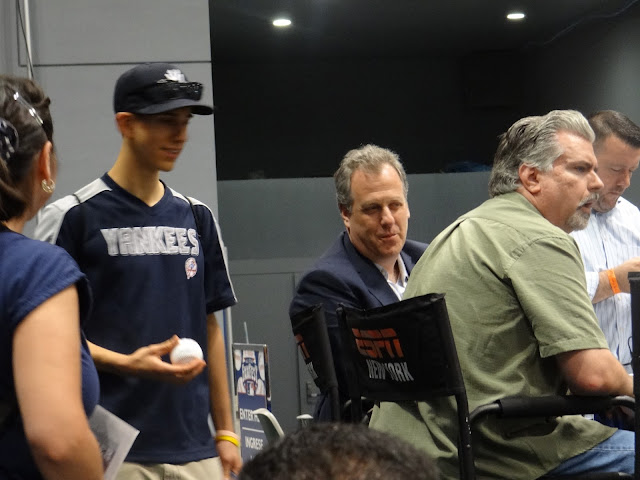 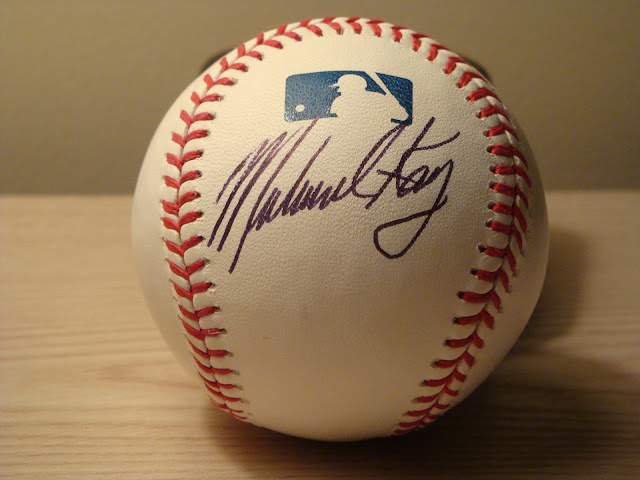 Although I wasn't wearing the proper attire, I'm really glad we all got to meet him! It was so surreal hearing his voice as he talked to us, considering I've listened to him as long as I've been a baseball fan. We all agreed that he was a good way to complete the day, and that from that point on we could have a little fun before we made the trek over to our next stop (see next post)! As we talked about the rest of the plan, Dad came back over from the Topps booth with a handful of cards, topped by this one: 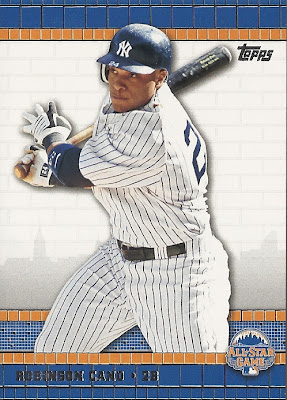 The special at the Topps booth was one All Star commemorative card per every 3 packs bought by customers. I planned to take part in this but I completely forgot about it, but I'm glad Dad wasn't shy! He bought 3 packs of 2013 Bowman, the first tastes I've gotten of the product. Well, it looks nice to me, and take a look at what I ended up getting! 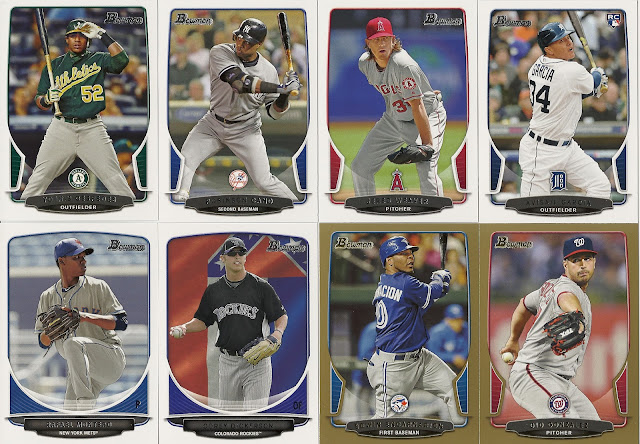 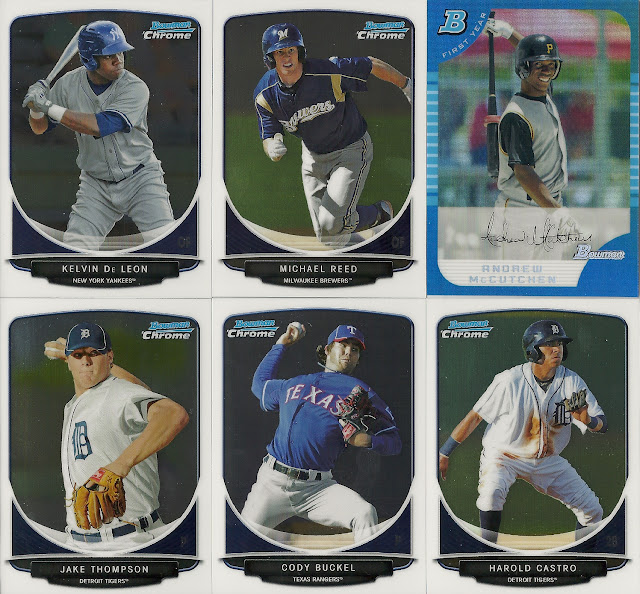 I'm not really into cards as much as I used to be, but I will never really turn them down, unless they're commons from the junk wax era. I plan on using many of these for future through the mail requests, so again, this was definitely appreciated Dad! 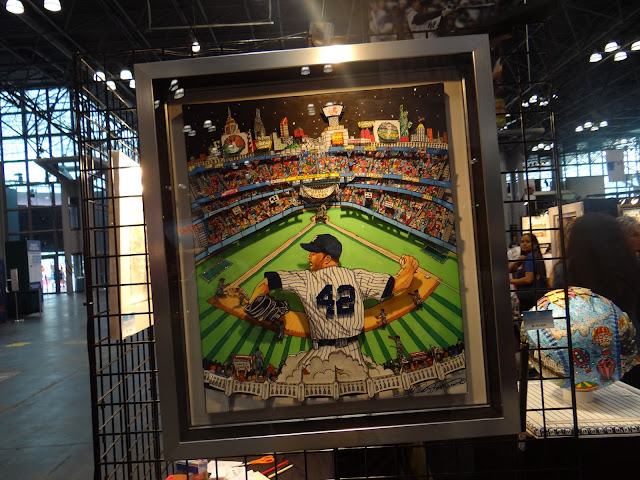 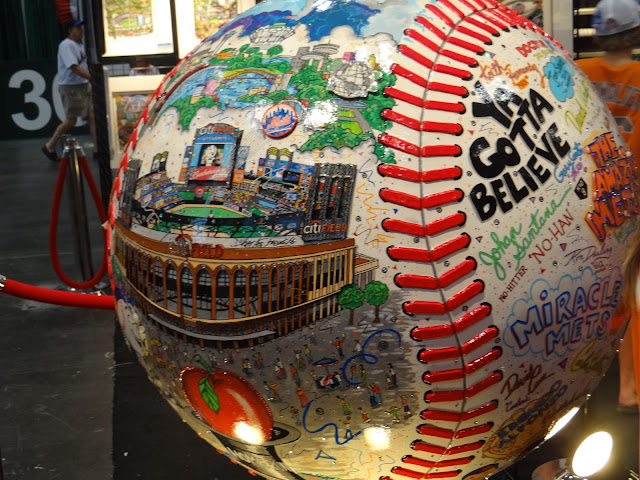 From there, we basically just walked around, snapping pictures in every direction, and as we headed out, we posed for a photo with the Fanfest "World's Largest Baseball", which is below the header of the post. I want to thank Dad once again for everything he did for me at this show, along with my buddies for accompanying me, although they seemed to have had a great time as well. But this trip wasn't over yet...