Hey guys, Drew back here, I'm pretty this is 3 maildays in one, but whatever. Right now I really can care less about trading, as the awards are really starting to shape up. Many of the panel members have chosen their nominees, and the final nominees may be announced as early as Wednesday/Thursday, depending on if the rest finish. So, got a quick care package from William, same with Spastik Moose, and an eBay package. Here are my results: 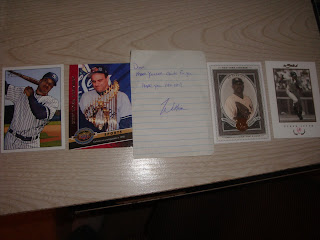 Care package from foul bunt: Jeez, that's like 2 from him in a week! I asked why he didn't conserve .85 cents and send them all in one, but at least he had a reason, that he didn't look through his other box of tradebait lying around! I think he may have traded me the CC before, but I needed the other 3, including the Cano, which gets him .5 on the scoreboard! Thanks dude! 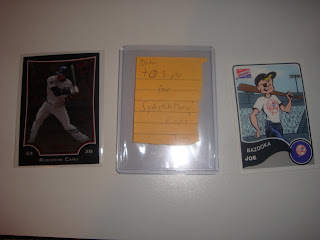 Care Package from Spastik Moose: Well, he told me he bought the Cano for me, so that makes me happy, that someone cares about me & my castle of baseball cards! It's a nice card, I now have the base & refractor versions of it. No idea what the Bazooka Joe thing is, didn't collect in 2003, so I have no clue. Help needed on that one. + .5 Points for Spastik Moose!

eBay Purchase: This I only got because it's been stalking me, plus it had pinstripes on both, and I guess it's nice. It was 4 bucks including shipping, so overall, a dual game used of Robinson Cano & Ross Ohlendorf was a nice little addition to the Cano PC. It's numbered out of 400 and now I have 2 out of his 5 dual game used cards in the set, still need the Cano/Damon, Cano/Posada, Cano/Michael Young. Holla if you have one.

Thanks all of you guys for the stuff, be sure to check out their blogs. See Ya!

Oh yeah, please click on the picture above and tell me that doesn't look like a face, it kinda creeped me out.
Posted by Drew at 7:59 PM