Revealing the Rest of the Mysterious Binder...

Hey guys, Drew back here. I figured, with the rest of the day with nothing to do, why not finish off this binder series with a bang? I scanned the rest of the bigger cards, and while I would've scanned them all, I figured you would all prefer to see some of the other ones I didn't get to show yet. 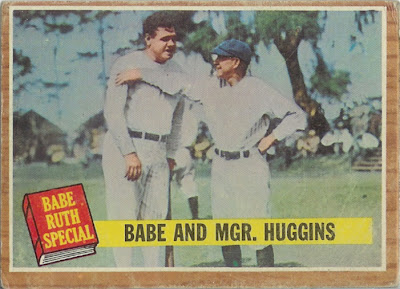 Well, why not start with the Babe? Sure, it's 27 years after his retirement, but still, it's my oldest Ruth card in my collection. It's part of the Babe Ruth Special that Topps threw into the 1962 set, honoring him. This card shows him and Hall of Fame manager Miller Huggins, which is perhaps my first card of his. Pretty sweet for sure.

From my 1961 Topps set I'm trying to build, here are 3 of the cards in the "Baseball Thrills" subset. I already posted the card highlighting Mantle's 565 foot home run, which is also part of the subset, but these are awesome too. My favorite of these 3 is the card that dedicates Rogers Hornsby's .424 batting average in the 1924 season! Just thinking of how impossible it sounds to hit for that good of an average in the major leagues makes me think even better of Hornsby and the card. 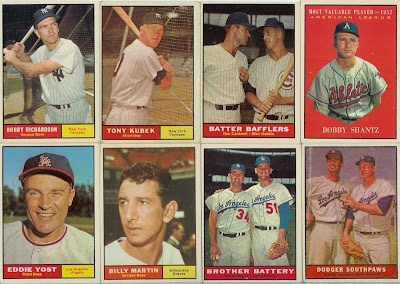 Next were some of the base I needed in the 1961 set, from left to right: (top) Bobby Richardson, Tony Kubek, Batter Bafflers (Cardwell/Hobbie), Bobby Shantz MVP, (bottom) Eddie Yost, Billy Martin, Brother Battery (Norm/Larry Sherry), & Dodger Southpaws (Koufax/Podres). Most of the cards are in awesome shape, and I love the player selection. Glad to have these ones knocked off the set list. 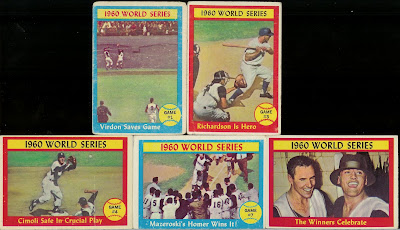 Also from 1961, I got 5 of the 8 World Series highlights cards. It's cool, because even though the Yankees wound up losing the series, I got a chance to watch the game that Mazeroski hit the winning home run on an MLB Network special, and it was really fun to watch. I have a lot of the Pirates autos from TTM's, and I'd say it's safe to say they are my new favorite National League team, as tough to watch as they normally are. The Game 1 "Virdon Saves Game" card isn't in great shape, but it will still join me in the pursuit of the set. 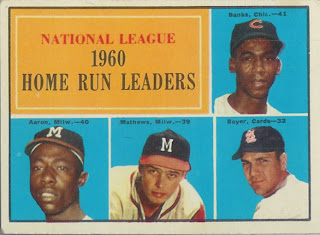 The final card from 1961 to show is this NL Home Run Leaders card, featuring Ernie Banks; Hank Aaron; Eddie Mathews; and Ken Boyer, all pictured on the front. Banks led with 41, while Aaron trailed by 1 and Mathews trailed by 2. Sounded like a close race to the Home Run crown for sure! 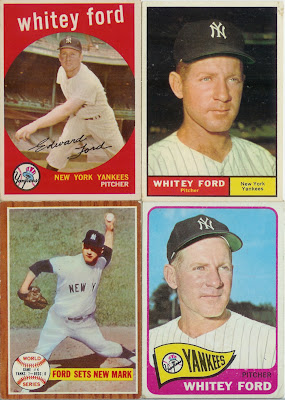 Next are some cards that probably should have deserved their own post, and I forgot to give him that post. None other than "The Chairman of the Board", Mr. Whitey Ford! In the binder, I found his 1959 Topps, 1961 Topps, 1962 Topps Postseason Highlight, and his 1965 Topps! All 4 are absolutely beautiful cards of perhaps the greatest Yankee to ever take the mound. 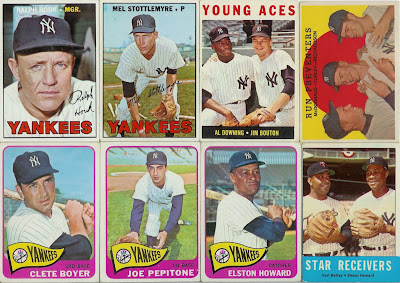 Here are some of the other Yankees I found too, ranging from 1959 Topps to 1967 Topps. One set I could try to build following 1961 Topps is 1967 Topps, because there were plenty of them in the binder. A thing I picked up on recently that I love about vintage is the colors and just the way players stick out on the cards. The cards have a 'pop' to them that most modern day cards don't seem to carry. 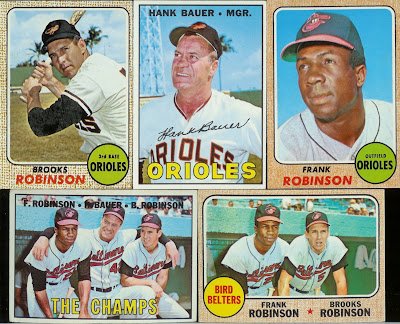 Here's a scan of all Orioles, for William and all my other Orioles fans out there! I've always had a soft spot for the Orioles, as they probably would be my second favorite team in the AL East. They've had some great history and great players come through, such as the Robinsons, Brooks and Frank! Both of them were unbelievably talented, Brooks more with the glove and Frank with the bat. But you all know that. These are some great looking cards for sure! 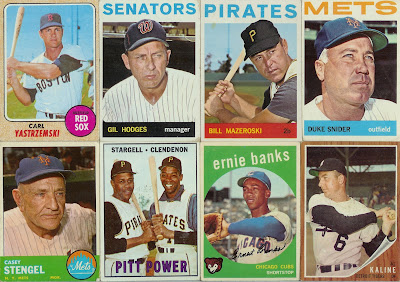 Well, here are some more of the best cards I found in the binder. Many Hall of Famers and 1 should be Hall of Famer (Hodges) are on this scan, my favorite being the 1959 Topps Ernie Banks, but I also love the 1962 Topps Al Kaline! I would love to try the 1959 set one day, because I think it's one of the greatest sets of all time, without question. That Banks card really pops in person, and it's probably one of my favorite vintage cards. Also, did I mention I like the Pirates uniforms? And Willie Stargell? Well, now I did. 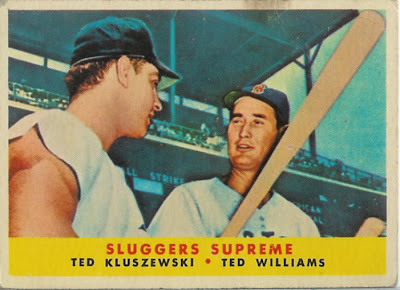 I guess this card is a good way to finish off the series. Nothing like a 1958 Topps "Sluggers Supreme" card of Ted Kluszewski and Ted Williams! I make a few exceptions to Red Sox players in terms of likeability. I like Ted Williams, David Ortiz (what a fantasy helper), and Jon Lester (since he's a warrior and beat cancer, I respect him a lot). This is my first vintage Williams card, of hopefully a few more to come. As for Kluszewski, he seemed like a pretty cool player, cutting off his sleeves to show off his muscles to the fans every game.
I think if I had to pick one word to describe this binder, it was just simply unbelievable. It was full of firsts for me, including giving me my first vintage cards of Yogi Berra, Mickey Mantle, Ted Williams, Stan Musial, and many, many more. Other than their dollar value, these cards are certainly special, and they tell a story better than many manufactured patch or any gimmick short print card can do today. The hobby has really changed in the past 40-50 years, for the worse? Maybe. Topps will never be able to create a nostalgic feel to their sets like they did back in the 1950's and 1960's. That's for sure.
I hope all of you guys can some day find an opportunity this amazing to add these cards to your own collection. I think in every lifelong collector's journey through the baseball card world, they'll have at least one big moment like this that they'll never forget. Unless I find a 52 Mantle rookie laying on the streets one day, I doubt dad and I could ever do this well again! I'm happy to share this collection with you, and I feel bad for the poor people we took the cards off of for a whopping $20, but I'm gonna hang on to these for the rest of my life.
Thanks again Dad for your magic touch! See Ya!
Posted by Drew at 4:14 PM