Hey guys, Drew back here. So, last night, I went to the Yankee game, and it sure was a nailbiter. I don't know if I've ever been to a closer game, as the Yankees wound up losing 6-5. I'll have more on that including some pictures sometime soon. For now, let me reminisce of dad and I's vintage pickups at the White Plains show this past weekend. 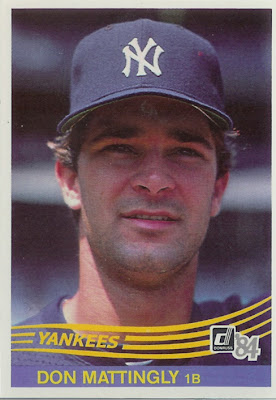 Yeah. I just went there. I started off a "vintage" post with a 1984 Donruss Don Mattingly rookie card. I know what you're saying. "THIS ISN'T VINTAGE?!?!" Well, it isn't necessarily vintage, but it had to go here. So, deal with it. Anyways, I got this card for $12, since it was in great shape but was the only one of the major rookies Mattingly has that I didn't have yet. Always nice to mark one off the list. Oh, and this one's my favorite of the 3! 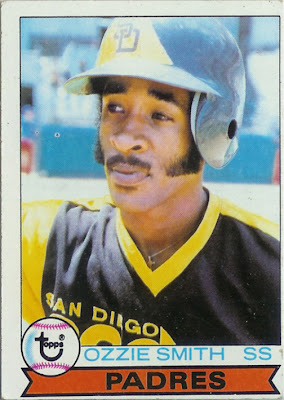 Next was a very off centered, but cheap, 1979 Topps Ozzie Smith rookie card! I'll have more on Ozzie before this series ends, but for now I'll just write about this one. His rookie was one that I've wanted to add to the Hall of Fame rookie collection for a while now, no matter what the condition was. 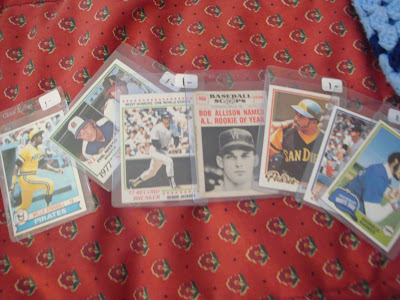 Now onto the picture I took rather than taking each card out of their holders and scanning them and putting them away. Boy was I lazy the day I scanned these. Anyways, oh yeah, the cards. Dad got me these, and I needed most of them, and even if I had them, definitely happy to add seconds of them! I've really taken interest in 60's and 70's cards, recently buying a huge box just to hold them in. My favorite of these is probably either the 1979 Willie Stargell (Pirates!) or the Bob Allison card, from 1961, that I'm pretty sure is not a Topps card. Interesting... 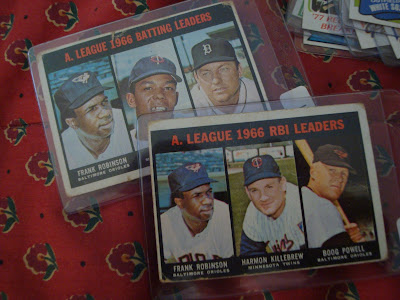 Also included in dad's little vintage bunch were these 2 1967 Topps League Leaders cards, both featuring Frank Robinson on them. It's funny because Robinson also was the first one on the Home Run Leaders card. Oh thats right, he won the Triple Crown that year! I should probably add the home run card sometime just to finish off the trio of Robinson-leading cards. 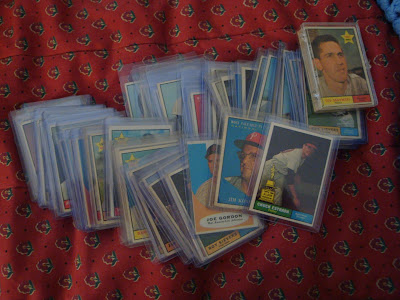 HOLY 1961 TOPPS! Yeah, Dad wasn't done with the vintage shopping, to say the least! Between the two of us, we combined for just under 90 new cards to add to our set. I picked up a lot of 20 cards for $5, while I only had 2 of them already. Dad got all the ones in toploaders, and I can't wait to add all these into my box of 1961 cards! 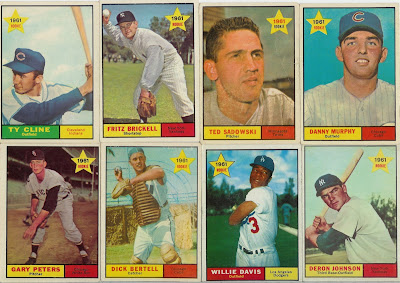 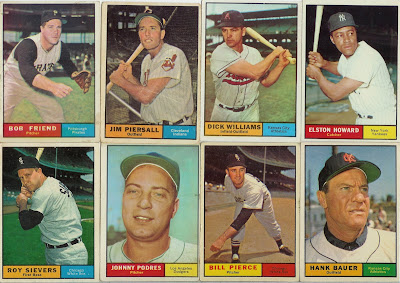 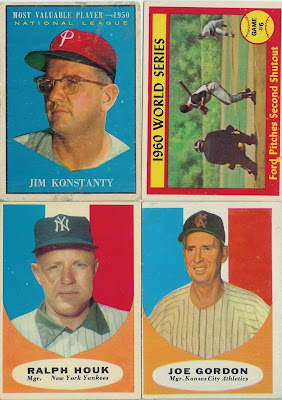 Those were just some of the bigger cards of the bunch. Most of the cards were just commons, but a few cards stood out, such as the Dick Williams card, the Whitey Ford postseason highlight, Johnny Podres, Elston Howard, and a MVP card of Jim Konstanty, my ex-little league teammate's grandfather. The condition of most of these are decent, some could be better, but for now they'll fit for sure! 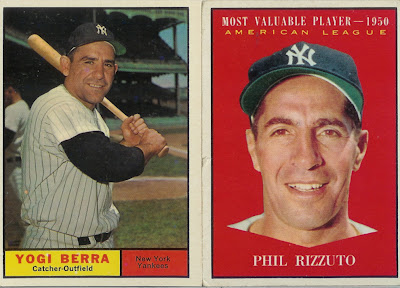 .... we're not done with 1961's. Here we have the Yogi Berra base card, as well as the Rizzuto MVP card. I bought the Rizzuto and Dad got the Berra as well as the following two cards. Yogi's card from that year is one of my favorite cards he has, I'm not sure why though. It just really pops though. 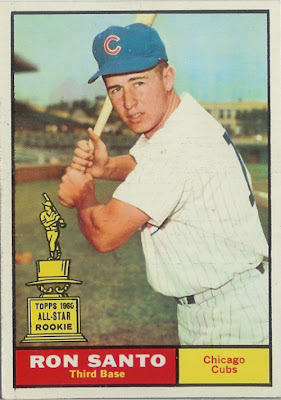 Dad also got me the Ron Santo Rookie Card, featuring the famous Topps All Star Rookie trophy. Santo surely was an All Star throughout his career, and possibly should've been considered a lot more for Cooperstown. A career .277 hitter with 342 home runs, as well as 9 All Star selections and 5 Gold Gloves makes me wonder why he's not in when guys like Orlando Cepeda, Jim Rice, and Bill Mazeroski are in. The card is in great shape and is definitely one of the best looking cards in the entire set. 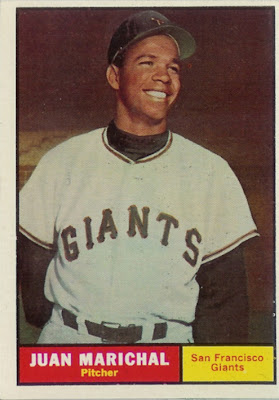 But wait, there's MORE! The final 1961 card I obtained at the card show was the rookie card of Hall of Fame pitcher, perhaps the best pitcher throughout the 1960's, the Dominican Dandy, Juan Marichal! Marichal, as well as Santo and Billy Williams, was the last top rookie card to acquire for the set! Marichal was a 10 time All Star with a career record of 243 wins and 142 losses, and an ERA of 2.89. He won the most games throughout the 1960's, using his intimidating leg kick to put a scare in some of the best hitters in baseball. This card is a little off center but otherwise the corners are sharp and it's perfect! No need for a replacement with this one!

So, well, Dad and I really did some damage with that set we're building. If any of you have any 1961 Topps cards laying around, please check out my have list and let me know what you have that I may need. Thanks so much once again to Dad, I wouldn't be nearly as close if it wasn't for him!