Hey guys, Drew back here. So, I've had this stuff sitting here for literally months, and I've never gotten around to getting it all sorted it out, scanned, and posted. But I finally have managed to scan the highlights of the "continuation" of my holy grail. As most of you know, back in March, my dad bought me a huge lot off of Craigslist, which was once the collection of a now deceased local guy, which was sold by his kids. This lot contained the "mysterious binder", that I've posted out of occasionally over the past couple months, showing off all sorts of very valuable and beautiful vintage cards!

Well, there was more. A lot more at that. Just a few weeks later, Dad found another Craigslist ad, and he went to check it out. While the location and people were different, the cards and autographs were clearly both from the same guy, so each of his kids must've sold different parts of it. After the ridiculous rush that went through me in the first tub, you could imagine how I must've felt when he walked home with 3 more tubs of the same size. While a lot of the stuff was junk wax from the late 80's and early 90's that all of you have seen hundreds of thousands of times, there were some big highlights as well to show off. I guess for every good thing you get 2 or 3 bad things, but its always worth it for the good thing! Take a look: 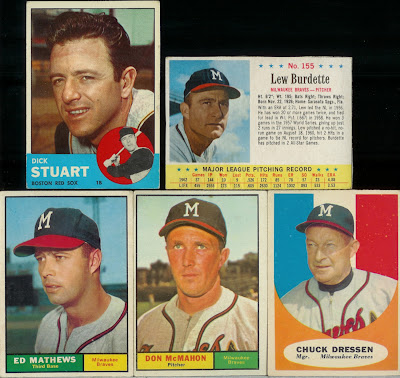 While there wasn't necessarily a vintage binder in this lot, there were a few scattered vintage cards, such as these 5 early 60's baseball cards. The highlight of these 5 is most definitely the 1961 Topps Eddie Mathews card, which knocks off another star off my quest for the entire 1961 set. Also the other 2 Milwaukee Braves cards of Chuck Dressen and Don McMahon were needed for the set. Not too shabby. 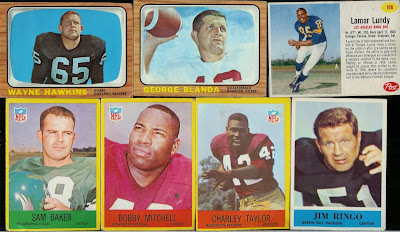 In this lot, we found all sorts of vintage, including these 1967 Philadelphia cards of Charley Taylor, Sam Baker and Bobby Mitchell. Also we found 2 1966 Topps cards of Wayne Hawkins and George Blanda. These are my oldest football cards now, and I'm glad to add them to the collection, especially of such good players like Blanda, Taylor, and Mitchell! 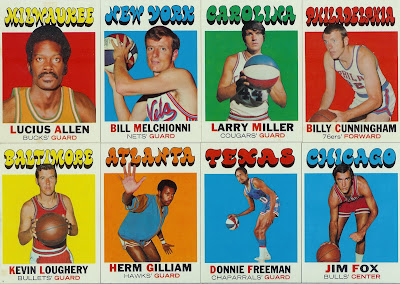 There was also some basketball vintage in there too! I barely know any basketball players, but these are from the 1971-1972 season. The Carolina Cougars, Baltimore Bullets, and Texas Chaparrals really stuck out to me, because I've never heard of those teams. Guess that's what happens when you don't follow basketball all that well. 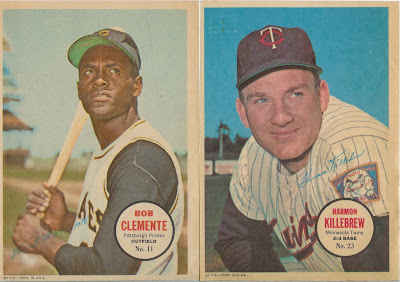 Also, we found some "pin ups" from 1967 Topps, two of the bigger names being Harmon Killebrew and Roberto Clemente, but there were many other great Hall of Famers as well. These are pretty neat, but I have to find out what exactly to do with them. 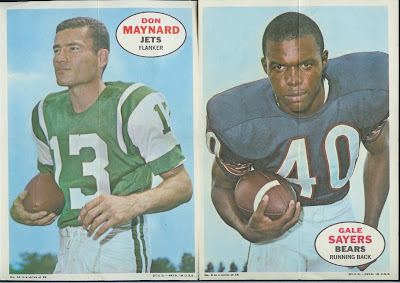 There were also some football pin ups as well, the two highlights being Jets Hall of Famer Don Maynard and Bears HOF'er Gale Sayers. Always awesome to get some Maynard stuff! 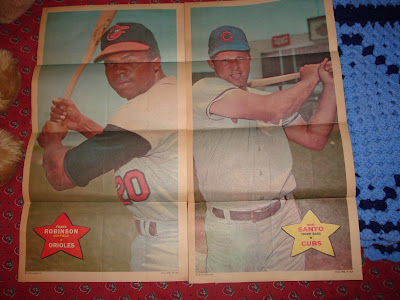 Folded up and hidden beneath the books and what not were these 2 1968 Topps posters of Frank Robinson and Ron Santo. These are absolutely huge compared to the size of a regular card, and flattened out I bet they would look really cool hung up on the wall. 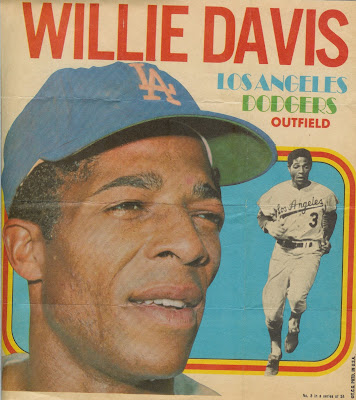 There was also this 1970 Topps poster of Willie Davis, also inserted into packs that year. Definitely a neat concept Topps used back in the day. 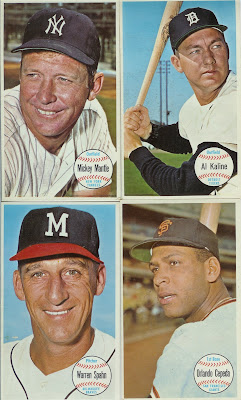 Next were a few 1964 "Topps Giants" cards, basically a different set involving larger cards. They're not worth as much as the flagship Topps set that year, but they look extremely nice in person. Of course, I'm super happy and thrilled to land the one in the top left corner, the card of Mickey Mantle. Just add that to the growing list of Mantle cards I own! 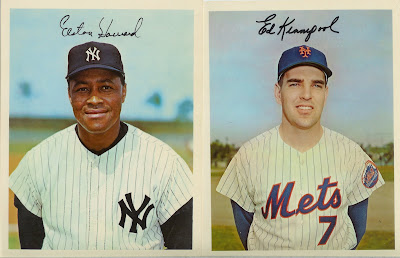 I'm not really sure what these were, but there were many nice color photos of several former Yankees and Mets. I chose one from each team for the picture, but there probably 25-30 of them to choose from. 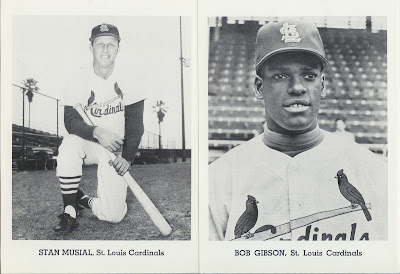 Again, I'm not sure what these are either, but there was a set of photos, many of them being either Cleveland Indians or St. Louis Cardinals. I'm sure these would look great for autographs, even in the black and white. 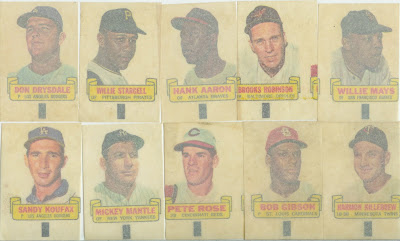 Also we found an envelope stuffed with these 1966 Topps Rub-Off Stickers, including these 10 Hall of Famers. Sorry guys, but I consider Pete Rose a Hall of Famer, gambling or not. I pretty much found one of every great player from that time period, as well as many team stickers, which was really cool! 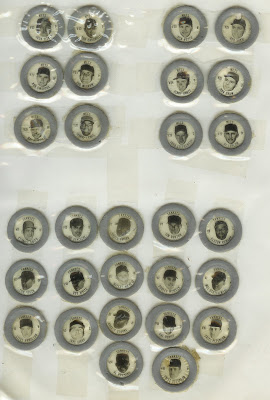 Another cool odd ball part to the tubs was that they were overflowing with these parts of Coke caps from 1967 of Yankees and Mets players. Apparently you could buy a Coke then and collect all sorts of players, even Mickey Mantle, who I found one of on this page full of them. Again, no idea what to do with them, but they're definitely neat. 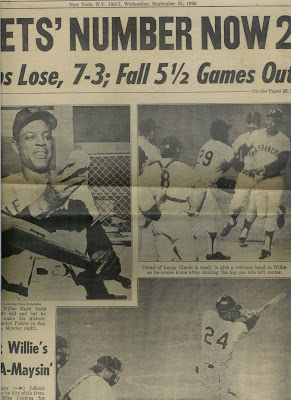 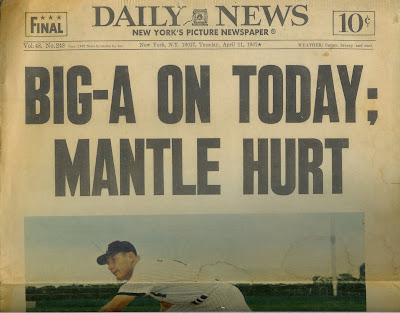 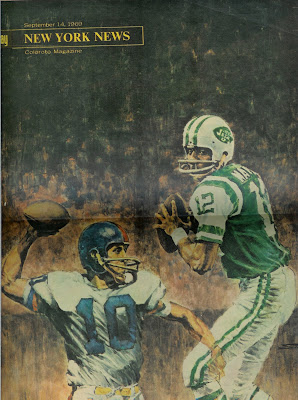 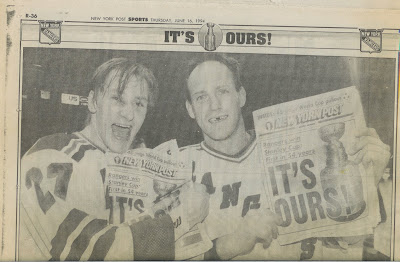 Continuing in the New York sports spirits, here are a few actual newspapers from many of New York sport's bigger events in the past, such as Willie Mays' 600th career home run, the Rangers winning the Stanley Cup, a preview to the year the Jets won the Super Bowl, and a headline from a Mickey Mantle injury, one of many. Kinda cool to have the stories with me about some great things, when they were fresh and exciting stories! 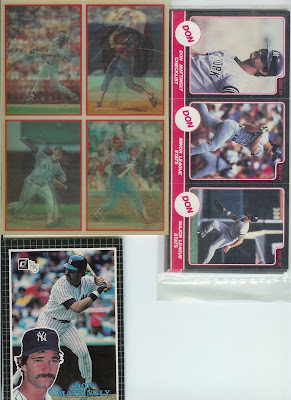 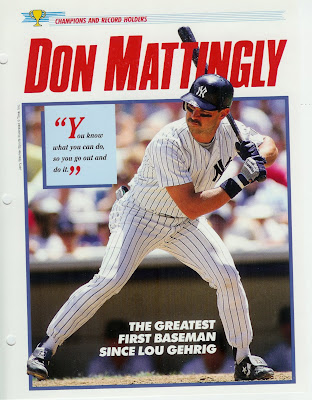 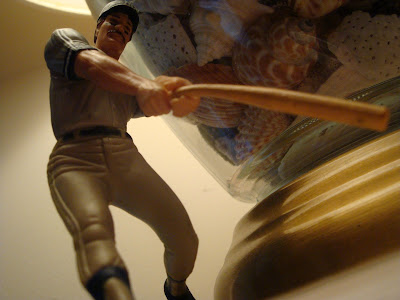 Obviously this guy was a pretty big Don Mattingly fan, as this was just some of the stuff he had of his. It's pretty cool to have his old Starting Lineup figure, as well as some old posters and cards. Always nice adds to my own personal collection of Mattingly. 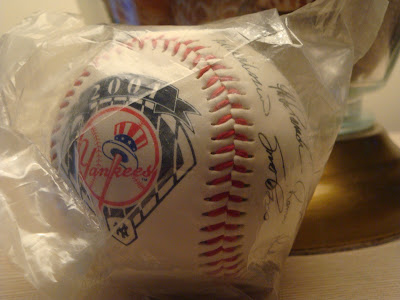 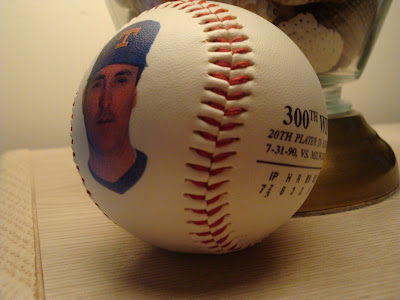 Sitting underneath everything were these 2 baseballs, first, the stamped baseball from the 2001 World Series Yankees team. The story of that team was incredible, and while Arizona got the last laugh, it was a memorable event in Yankees history, as they brought the entire country back up from the 9/11 disaster. Next is a baseball dedicating Nolan Ryan's 300th career win and his achievements. Definitely keeping these two balls.
The final thing in this post, the first of 3 in this mini series, was a new binder I found. Most of the players never made the big leagues, or even if they did, they didn't make much of an impact, but there was one player in there that I found that really made my day! 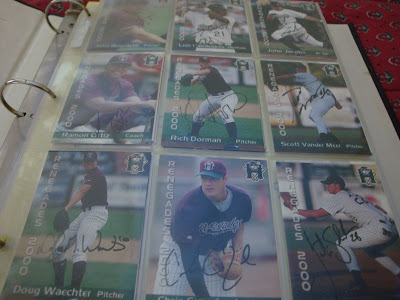 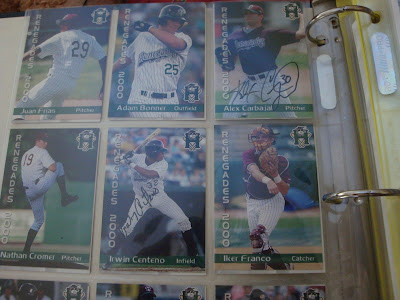 The binder was filled with Hudson Valley Renegades cards, my local minor league team. A few team sets from the late 90's were included, and many of the cards were signed.  Most of them aren't worth noting, but there were a few notables. 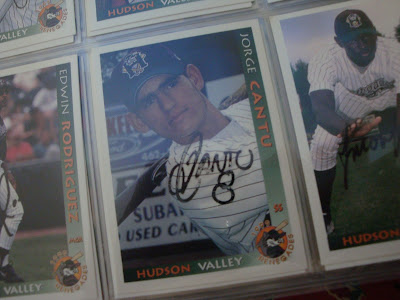 The first notable was Jorge Cantu, who has been a bit of a journeyman since his early days with the Renegades. He's played 8 seasons with 5 different teams, and has a lifetime average of .271. This next player absolutely trumped him though... 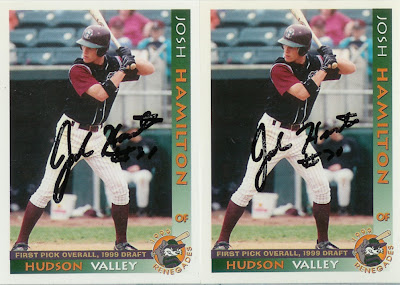 Before I flip out on here, here was my initial reaction when I found this binder:
Drew: (opens binders) Oh ok, its just Renegades cards. They're signed but pretty useless unless they're actually good players.
Dad: Yeah, well look through it anyway.
Drew: (looks through binder) OH MY GOD JOSH HAMILTON!
(Drew and Dad flip out)
Anyways, yeah, this guy was lucky enough to get 2 signed cards by the then troubled Josh Hamilton. Hamilton was drafted by the Devil Rays in 1999 and after playing 56 games in Princeton that year, he joined the Gades' for 16 games, and batted .194 in that stretch. This was during the time that he started to get in trouble with the law and hurt himself in many ways with his drug addictions. Of course, most baseball fans know that his story has so far been a success story, as he's won an MVP award and is an All Star.
Words cannot describe my face when I saw these sitting in the binder, and I definitely am planning on keeping them. Hamilton was already one of my favorite players in baseball so it was so sweet to land these 2 cards.
What do you all think of these new additions to my collection? There's more to come!
See Ya!
Posted by Drew at 5:00 AM