Hey guys, Drew back here. So, it's definitely a big day, at least for me in sports. First off, I want to congratulate Jim Thome on hitting his 600th home run. A true class act, and, as long as he's been clean, for sure a future Hall of Famer! Second, the Jets opened their preseason today against the Houston Texans. The 1st quarter was pretty much the only one that mattered, and they looked fairly good, considering they were missing 2/5 of the offensive line and Plaxico Burress. Speaking of good news for New York, this guy recently threw a party on the Rays a couple of days ago. I just picked up his autograph on eBay as my biggest birthday gift for myself, take a look: 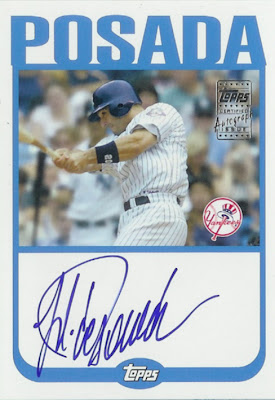 Out of 2004 Topps, a Jorge Posada autograph! While most people look at this and think about how horrible he's doing this year, I like to think about the excellent career Posada had as the Yankees starting catcher throughout some great times in the Bronx. Sure, he's having a hard time this year at the plate as the Yankees DH, but let's face it, he probably should have retired prior to this season. He even said recently that if the Yankees don't want to have him back next year he would go to another team, which is kind of sad to hear considering he's played 17 years here in New York.

Those 17 years have surely been memorable! Starting out as the backup catcher for current manager Joe Girardi, Posada caught between 60 and 100 games for the most part until 2000, when Girardi headed over to the Cubs. He never was a huge stat producer, but he had a couple of big years. He's been elected to 5 All Star teams, and has placed in the top 10 for MVP voting twice in his career. The first time was in 2003, when he batted .281 with 30 home runs and 101 RBI. Also, in 2007, he batted .338 with 20 home runs and 90 RBI! He became the only catcher of all time to ever hit .330 or better in a season with 40+ doubles, 20+ home runs, and 90+ RBI. Yogi Berra and him basically split the Yankees catcher hitting records, while Berra's legacy also landed him plenty of World Series rings. While he surely has been a Yankee great, I would put him around the level of Don Mattingly, Paul O'Neill, and Tino Martinez, 3 former greats but not great enough to make the Hall of Fame.

In terms of the card, and of his autographs in general, well, it was pretty expensive! It's hard to find a Posada autograph that sells less than $75, which I did fortunately find, paying around $50 for the card. I couldn't pass it up at the price and I'm glad to have autographs of half of the Core 4 so far. Pettitte and Rivera are definitely on top of my list to get as well, to join my Jeter/Jorge autos. I'm glad I payed $50 for an on card auto at least, and while the card is simply generic, the autograph makes the card way better.

Oh by the way, last post was #900! I realize the number when its coming up and I always just breeze right by and forget it as I got right past 900 without noticing. Anyways, See Ya!
Posted by Drew at 11:34 AM