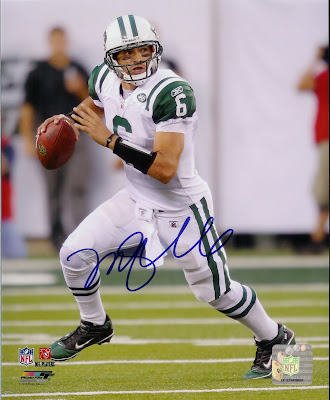 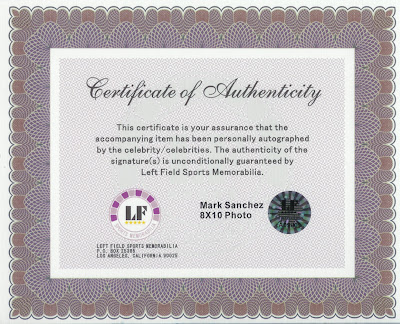 Oh hey remember me? If you all remember, back in January I bought this signed 8x10 autograph of Mark Sanchez, which was authenticated by "Left Field Sports Memorabilia". According to this company's website, they get their autographs checked by big name companies as well, such as PSA, JSA, etc. It came with the certificate of authenticity, assuring me that the autograph was real. Well lately I've been looking at other Sanchez autographs, and this just looked much different from the rest of them. So, I decided to take it to the card show to get it checked out by JSA, one of the best authentication companies in the world. It cost me $20 to get the picture checked, and it took over 2 hours for them to do their entire examination of the photograph. 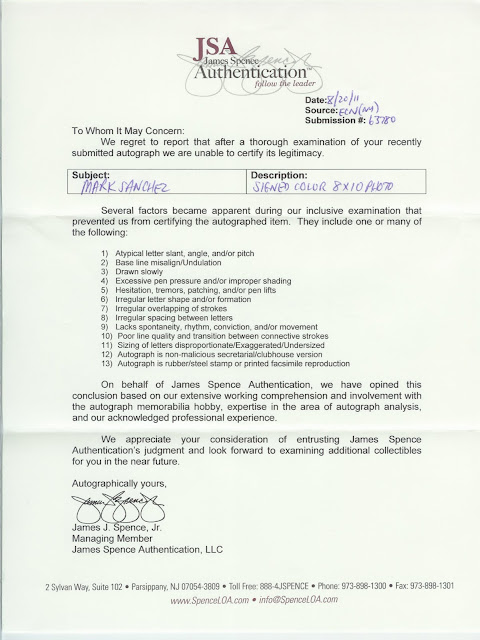 Dad picked it up for me at the JSA table while Mike and I were in line for Ernie Banks. It was bad news. JSA said that the autograph could not certify its authenticity. Does that mean it can still be real? Yes. Is it likely? No. The photo came from China, so unless they purchased the photo off another dealer, they couldn't have gotten it in person.
So, when I got home, I checked eBay to see if I can contact the sellers, and unfortunately, I can't, since they close down their account. I did see their feedback, and they had almost 100% feedback with hardly any poor reviews. Something is definitely wrong here, and I may never know the truth about this picture.
Do you guys have any advice for how to go about this?
Moving on. Like I said, there was certainly good news as well! Dad and I were just about to meet Lou Piniella when the 1:00 door prize winner was revealed to be my dad! So dad sprinted down the line of people and tried to get there to claim his prize before they gave it to someone else. He got it, and this was the prize: 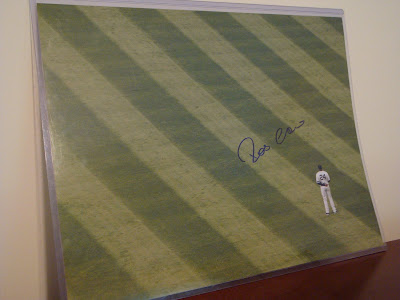 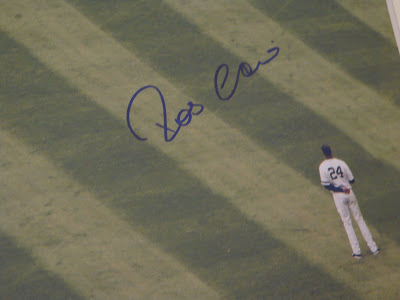 It was an 11x14 autographed picture of Robinson Cano! Cano, as you all know, is one of my top 3 favorite players, to go along with Derek Jeter and Nick Swisher, and he is one of the most fun players to watch in all of baseball. He can do it at the plate, with his glove, and he makes everything look smooth as silk. So, I was just a tad bit excited when dad came back with a prize that I can now hang up on the wall!
Unfortunately, none of us were crazy about the picture Cano signed. It looks like someone in the stands took a picture of him and blew it up to 11x14 size. No, we're not really complaining, as it was free and we were lucky enough just to win it. But still, I probably would've been a little happier with a picture of him batting rather than one of him just standing around with a ton of grass surrounding him.
But anyways, I still can't wait to hang that one up, and also, I don't know quite what to do about the Sanchez picture. Anybody know what to do?
See Ya!
Posted by Drew at 10:56 AM