Hey everyone, Drew back here. So, we're not quite done reviewing the card show. When we all got into the car on the way back, dad pulled out this box from his bag, saying we have a box to break soon! It was a box of the new 2011 Allen & Ginter! He got a very good deal on the box, and while I hadn't been overly impressed with the product so far, I definitely was excited to open the box. Before I get into the results, here is a little bit of product information, although most of you already know what to expect: 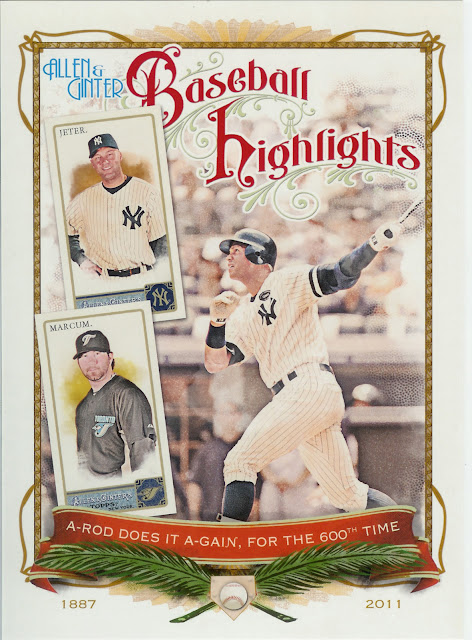 I definitely prefer these box toppers rather than the smaller versions, the N43 cards. As a Yankee fan, I couldn't have gotten much luckier than I was pulling one highlighting a Yankee's accomplishment. Never been a big A-Rod fan but it's definitely better than any of the others, for me at least.
Base Set: 127/350 (36%) 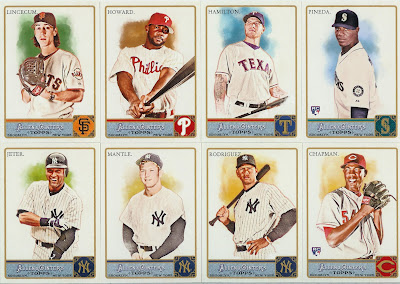 Most of you have seen one too many Allen & Ginter cards highlighted throughout the blogs, considering it's maybe Topps' most popular release every year, after the flagship product of course. I'm glad that Topps put a little more into this year's design, as it definitely has a bit different feel to it. They look pretty nice in my opinion, my favorite card being the Derek Jeter card.
Crack the Code Cards: 3 (Jeter/Reyes/Hoffman)

Topps used the weird borders for the Crack the Code contest this year, with each card having a different border design. Does anybody know if the code has been cracked yet? Just curious.
Hometown Heroes: 18/100 (18%) 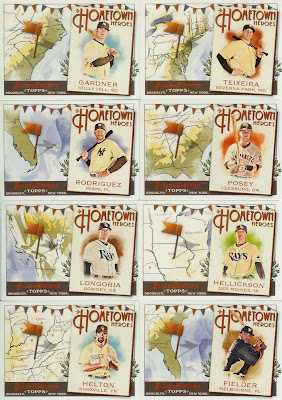 Here's Topps' annual insert that dedicates a country, state, continent, etc, where someone grew up. I have to say that this insert set has been way over done and it's gotten old. I barely even look at them anymore, and just throw them into a pile.
Minds That Made: 3/40 (7.5%) 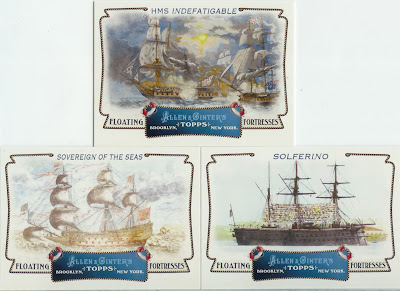 In 2011, Topps really went out of there way to make this product way more than just a baseball set. With all these random subsets, considering smart people, boats, and the history of man, it really kills the purpose of Allen & Ginter. The first couple years I did a lot of Ginter breaking, I didn't mind this stuff, but after year after year of random inserts finding their way out in trades, I'm getting sick of them.
Baseball Highlight Sketches: 4/25 (16%) I really liked these the first year they brought them out, 2 years ago, but since then they've really gotten sort of boring. The paintings, to be honest, haven't been all that great, and the design is a bit redundant. I pulled the Mark Teixeira card and then 3 trade bait cards out of this box.
Minis:
Base- 6
A&G Back- 5
Black Border- 3 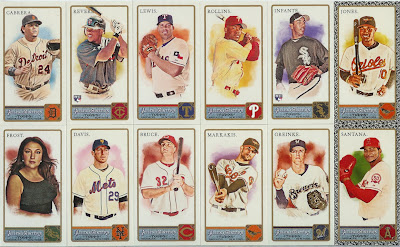 Here are most of the minis. The top row is made up of the Allen & Ginter back variation minis, and the bottom row is made up of the regular minis.  While the minis are the most realistic cards compared to the original set of Allen & Ginter, I almost feel like they are just more variations and versions to chase after. I guess some people like the chase, but with the ridiculous amount of variations and parallels of every card made over the past few years, it seems close to impossible to get every card you need to finish a player/set/team collection. 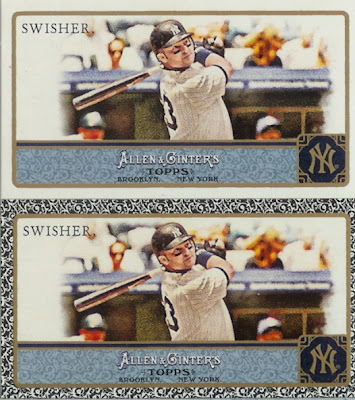 However, I was lucky enough to pull the base and black border minis of Nick Swisher for my Swisher collection! I like the looks of the black border minis this year over any of the new changes, because I was sick of the regular black border that had no style or anything to it. Pulling these cards of Swisher was one of my favorite parts of the box, because I guess it means a little less eBay shopping for me!
Mini Inserts:
Animals in Peril- 2 (DHole, Ethiopian Wolf)
Uninvited Guests- 2 (RMS Queen Mary, Waverly Hills Sanatorium)
World's Most Mysterious Figures- 2 (Kasper Hauser, Captain Charles Johnson)
Portraits of Penultimacy- 2 (Watson, Igor)
Step Right Up- 1 (Fire Eating) 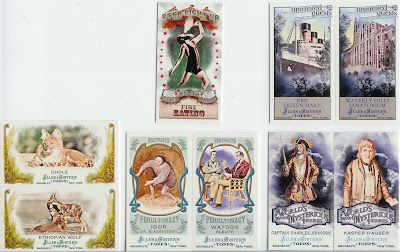 Again, way overdone on the non sports stuff this year. Does Topps really think we care a whole lot about these cards? What need do I have for a card of a DHole or Fire Eating? I can even tell you that 9 of every 10 kids probably wouldn't care all too much about a card having to do with these subjects. Yawwwn.
Bazooka Back Mini: 1 (Yovani Gallardo) 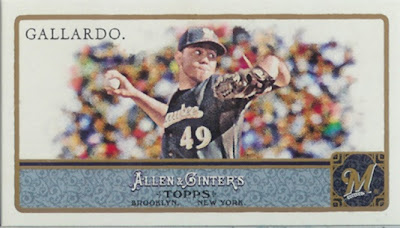 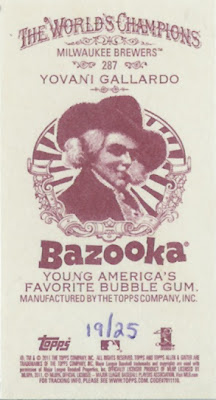 This card was definitely a surprise, and without it I may have been a little disappointed with the break. It's a hand numbered to 25 card of Yovani Gallardo. Gallardo is having a pretty good year, with a 15-8 record and a 3.37 ERA. He's definitely one of the more underrated pitchers in baseball, and had he been more well known this could've been a better pull. That being said, if anyone has a Yankee Bazooka back (especially Swisher/Cano/Granderson) and is interested in this, please let me know.
Relics: 3 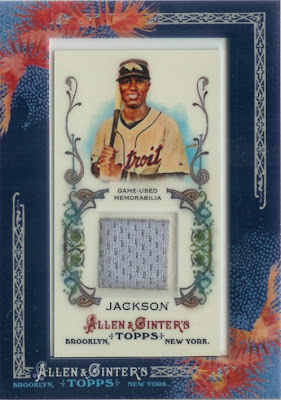 I guess we'll start from the worst to the best. Here's a jersey card of former Yankee prospect Austin Jackson. Jackson was supposed to be everything the Yankees were hoping for in a future center fielder, until they decided to ship him out to Detroit in the deal that landed Curtis Granderson. So far, he's shown a lot of promise, but he's becoming known as a bit of a strikeout machine. Then again, so is Granderson. But who would I rather have based off of this so far? Granderson. 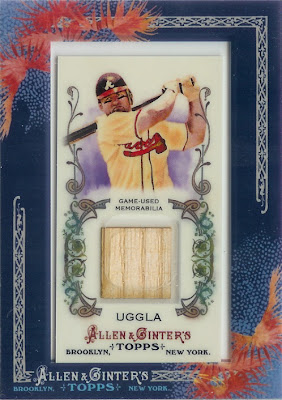 Next is a bat card of perhaps one of the hottest hitters in baseball, none other than Dan Uggla! I never had the idea, even through his terrible start to the season, that Uggla couldn't do it anymore. A lot of hitters this year, for some reason, can't even bat .200. I'm not quite sure what the reason was, but guys like Adam Dunn and Uggla, guys who were some of the better sluggers in the game, suddenly are averaging 2 hits per every 10 at bats! Anyways, lately Uggla has pushed the average up quite a bit, and still has quite a few home runs, with 30. 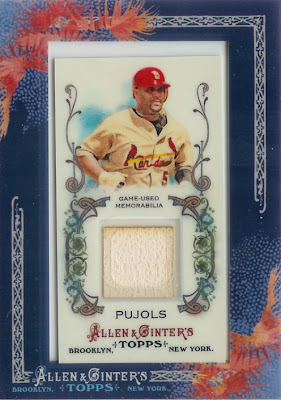 Lastly, the biggest pull of the box was this Albert Pujols bat card! You can't hit much better than King Albert, as he's by far the best all around hitter in baseball. Even battling a lot of injuries this season, Pujols still leads the National League in home runs and is well on his way for another 35 home run season, and maybe 40 as well. I sure hope Pujols is doing what he's doing in a fair way, as it would really be a devastation to baseball if he was caught using performance enhancers. I doubt it, but hey, you never know.
Overall Thoughts: All in all, 2011 Allen & Ginter is pretty much the same as always, with a ridiculous amount of oddball cards mixed in along the way. I would say better things about the product had the inserts been a little less redundant and if they used some actual baseball creativity rather than some cemeteries and near extinct animals. Make a seperate set for that stuff if you really think its THAT necessary to include in your product line.  The design this year was great, the price is better than ever, the hits are decent enough, but there's just something missing from this product, or that it's just getting old fast. Overall Grade: B
Well, that'll just about do it for the entire Card Show report! I want to thank everyone as always for sticking through it and checking the blog out, I can't even tell you how much it means to me. And also I would like to thank my dad once again for all of the great things he's done and given to me over the past few years, and I know you'll probably read this sooner or later, so well, thanks Dad. You're the best!
See Ya!
Posted by Drew at 4:46 PM