Hey guys, Drew back here. I've always been a fan of the 2007 Bowman's Best set, even opening a box a long time ago. The cards are sweet in person, and even with the sticker autographs, they still look awesome nonetheless. One of my recent pickups just happened to be out of this set, so check it out: 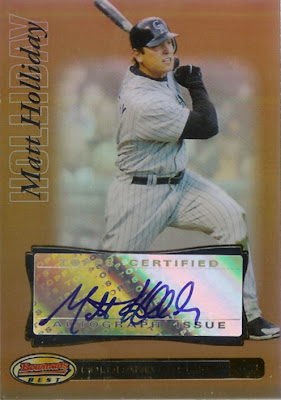 The scanner really doesn't do this card justice, because it looks 100 times nice in person! It's a gold refractor autograph card of Cardinals All Star Matt Holliday, numbered 16 of 50! I became a Holliday fan early this season, after making a trade in fantasy baseball to land him, and trading away Tim Hudson, Ricky Romero, and Kevin Youkilis, just to make a spot in my outfield. It doesn't sound like a very fair trade, but I'm in 1st nonetheless. Holliday was batting .348 when I added him to my team back in early May, and while he's had a DL stint and has dropped off, with a stat line of .319/18/62, he should finish in the top 10 for MVP voting this season. I think he's one of the better outfielders in baseball, and while people may argue he can't really carry a team himself, not a whole lot of players can!

So, I'm definitely pleased with this card, especially for less than $10! I've got 3 more eBay purchases to show off, and as soon as they come in the mail, they'll be on here!