Trip to the Shop Yesterday!

Resulted in a few thick card supplies, and:

So, here are the highlights: 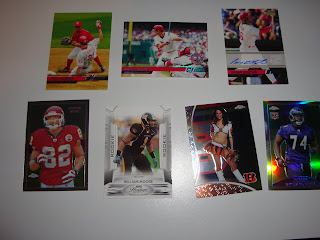 In Prestige I got all base, no dummies too, didn't know Panini didn't put them in there, one pack had a William Moore RC (Falcons 2nd rounder), and that's about it.

In Topps Chrome Football I got my money's worth, a National Chicle Dwayne Bowe, Bengals cheerleader, and a RC Refractor of Michael Oher (going to Beardy), plus some nice base. Like the set in general, hoping to get more.

In SPX I did horrible, in a 4 card pack for 8 bucks, I got a 20th Anniversary Jim Edmonds, a dummy, Manny, and McClouth. I am officially done with that product.

And finally, my guarenteed hit pack was nothing special either. Stadium Club gave me a Chase Utley Photographers Proof #ed/599, a Cole Hamels #ed/999, a Jayson Nix RC, another RC, and a Brian Barton RC Autograph. Brian is in the Braves farm system, and I couldn't get much more upset after pulling that one. Oh well, maybe something better next time :(

Labels: drewscards, Trip to the Shop