From Michael to Giancarlo

Hey guys, Drew back here! There is now only 1 more day left for you to sign up for my Victory Fine Art giveaway! I am looking forward to giving away any print of your choice, and would love to see some more entries if at all possible.

If there's one thing I can be especially proud of myself for recently as far as the hobby is concerned; it's my new expansion onto eBay. I have been a constant buyer off the 'bay for as long as I've been collecting, but I had never used it to sell anything... until this fall. They recently had a promotion where you could list up to 1,000 items for free (which, of course, just started up again if you're interested), and I decided to take advantage of not paying listing fees, which has always been my biggest turn-off to the site.

I always preferred the system Check Out My Collectibles uses, where the fee is small and the items are held for as long as you would like, only with a small additional monthly fee for keeping your inventory on the site. I still like that system better, but I can't lie; it's been pretty stale lately. I've had trouble selling cards on there ever since my initial boom, and now I just have a collection of unwanted cards in my inventory.

So with eBay, I decided to flip some cards I wasn't interested in anymore and upgrading some of my favorite autographs. This was perhaps my biggest "hit", outside of some higher end Severino cards I've been showing off this month: 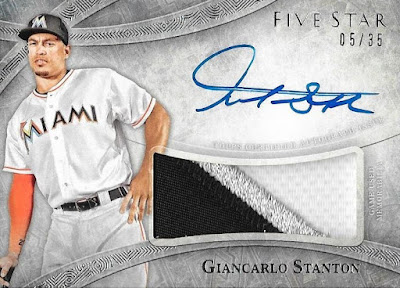 I've had a 2011 Topps Tribute "Mike" Stanton autograph sitting in my autograph box for some time, but I wasn't a huge fan of the card. First, there's that annoying nitpicky feeling that his name has since been formally changed to Giancarlo in that time, so it always bothered me to see the wrong name on the card. Second, the design and photo really didn't do much justice to just how powerful this man is.

So, I sold that card for about $30, and spent about $25 additionally to give Miami's mega millionaire the respect he deserves. Injuries have hampered his young career, yet he still has managed to crush 181 career home runs at the ripe age of 25. I picked him to win the 2015 NL MVP (with Harper as a Dark Horse), and he only played in 74 games. The Marlins were a disaster after I selected them as a surprise Wild Card team, which wound up being my most embarrassing preseason pick. However, going into 2016, Stanton should be healthy and one of my all time favorite players is now at the helm in Don Mattingly, rather than their former GM Dan Jennings. I'll learn my lesson and keep them from the playoffs next year, but I do think the team has some bright talent that could surprise some people down the line (especially if this guy can stay on the field).

The card I added was the gorgeous jumbo patch autograph numbered to just 35 copies out of 2014 Topps Five Star, one of my all time favorite Topps brands. It has a certain elegance to it, however at the same time Stanton looks like a Roman warrior carved in stone. I couldn't be happier with this pickup of one of my favorite players I've ever gotten to watch!

If you haven't tried selling on eBay before, I do recommend it, especially for smaller items like cards. It's an easier process than you would think, and as long as you stay on top of things and learn some basic selling strategies I'm sure you can easily make some great collection upgrades too!