Hey everyone, Drew back here. Before I continue, I just want to friendly remind you that my contest for a free print from Victory Fine Art will be concluding on Halloween at 5 PM EST. It's a great value and they do a fantastic job, so check out this link if you want to try to win something special to display in your man cave.

I recently was perusing the web as I often do, until I was sent an email from Barnes & Noble. I've ordered a few signed books from their website over the past year, and they now send me updates when new signed books will be hitting the web. As soon as I saw this coming out on October 20th, I knew I had to make it mine. 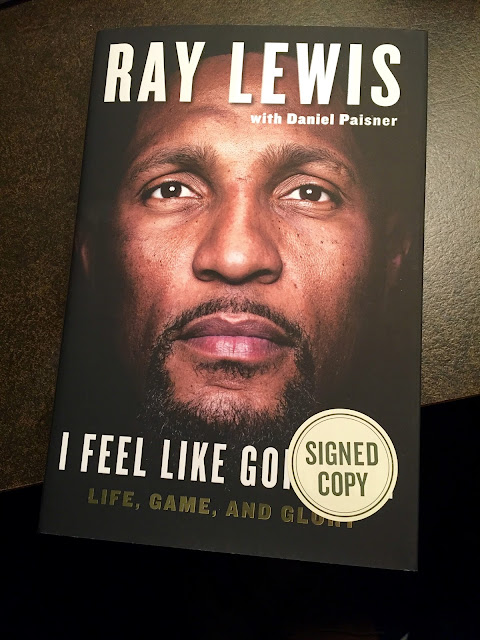 Future Pro Football Hall of Famer Ray Lewis just released his first tell-all autobiography entitled "I Feel Like Going On: Life, Game, and Glory". I haven't had the chance to read it yet, but the description sure does put it at the top of my reading list. Ray talks about his tough childhood and his incredible football career with the Baltimore Ravens mostly within the book, as well as discussing his faith and how it has gotten him to where he is today. Lewis' story has been the subject of debate for many years now. While I don't expect him to go into too much detail from the controversial Super Bowl party in Atlanta of 2000, I do hope he at least touches on it. If you didn't know before, he was on trial for murder in a very suspicious incident that has since left his reputation in jeopardy. However, since that case he has avoided trouble and focused on becoming perhaps the greatest linebacker of his generation.

I'll never forget Ray for his elaborate dance routine to pump up the crowd in Baltimore. He was one of my favorite players to watch, and it isn't the same without him on the field. He was the player on the cover of my first Madden I ever owned (Madden 2005), and was one of the few that didn't allow the Curse to get to him.

His autograph doesn't have much to show for it, but for $20 shipped, I'm beyond content with what I received. I haven't been reading as much as I used to, but I did review Jorge Posada's autobiography from earlier this year and hopefully eventually I can cover this one as well.

If you are interested in great signed book opportunities, look no further than Barnes & Noble's signed book collection. They offer a wide variety of autographed books that would look great in any collection.