Hey guys, Drew back here. A few weeks ago, I was surprised with a through the mail success from Nationals pitcher Doug Fister. This week, I was greeted with yet another, this time courtesy of a certain Colorado Rockies up and coming star. 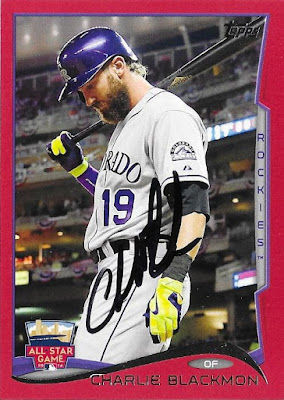 Charlie Blackmon, otherwise known as "Chuck Nazty" on Twitter, enjoyed a breakout season in 2014; making the All Star team for the first time in his rather brief career. He recorded 6 hits in a game on April 4th of that year, and everyone seemed to question whether he was a fluke designed by the ballpark effects of Coors Field. His home/road splits clearly indicate that he benefits by playing at home, but he still is quite the player either way.

Perhaps the highlight of Mr. Blackmon's has more to do with his impressive facial hair than his abilities on the field. He may agree. His Twitter biography reads "long hair dont care, and ya... i have a mustache too! Don't act like you are not impressed." Between his charismatic personality, excellent long whiskers, and All Star talent, what's not to like about this guy?

I had my 2014 Topps Update Red Parallel signed over the course of a few month waiting period. Again, I lost my file containing the dates of when I sent everything out, so I couldn't tell you any additional details. But the card came out great, and I guess that's all that truly matters.