Hey guys, Drew back here! This year, along with my love for the hobby, I've gained additional love for a few TV shows, The Walking Dead in particular! I started watching TWD during the late fall, and have absolutely loved the show. It goes so far beyond the basic zombie gist many people make it out to be, and I guarantee if you're into any suspense or drama shows, you would love this one too. I recently mailed off an 8x10 of a show promo overseas to the leading actor Andrew Lincoln, who plays Rick Grimes. Late last week, Lincoln returned the picture signed! Check out the results: 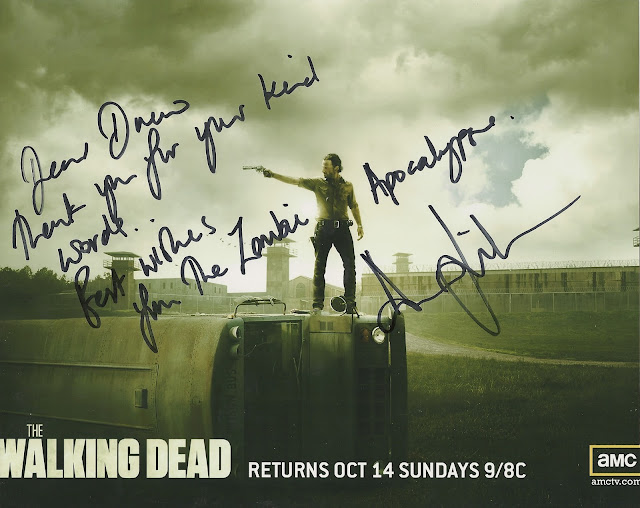 "Dear Drew, Thank you for your kind words.. Best wishes from the Zombie Apocalypse. Andrew Lincoln"! I hadn't been as excited for a TTM in a long time to the extent I was for this one. Sure, I can get all of the sports stars out there, but something about my autographs of Lil Wayne (whose music I really can't stand anymore), Betty White, Jack Black, etc; carry much more personal value. These are ones I can share around school and get a lot of "Wow Drew, that's awesome", compared to an athlete most haven't really heard of. And this one sure did draw a lot of positive feedback and reaction, especially to my fellow Dead Head friends! 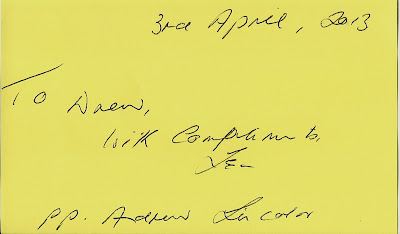 When I took it out of the envelope, this sticky note was placed on the right corner of the photo. It took me forever to figure out what it was, although I still don't know exactly what it says. I sent the photo to Lincoln's agent, so I figure this note was for Andrew to use to sign the photo. Of course, this sort of takes away from the experience; but it's completely understandable that he doesn't get to read all his fan mail. The fact that he still took some time out to sign is appreciated enough.

I originally planned to have a large amount of the cast sign this picture of Rick, however the amount of inscriptions Lincoln added wound up wrecking that plan, in a good way of course. I ordered a bunch of 8x10's to send out to the cast during the filming of Season 4, which will start in less than a month.

This is easily one of my favorite successes now, and I'd like to thank Andrew Lincoln for making my day! Wish me luck in May with the rest of the cast. Praying to get Daryl!