The Highlight of my Robinson Cano Collection!

Hey guys, Drew back here! I've been meaning to show this one off for a while now, as it's now been in my possession for a few weeks. I used a good chunk of the money I made off of COMC to buy quite possibly the best Cano autograph around, and while it wasn't cheap; I think it was definitely worth it! Take a look: 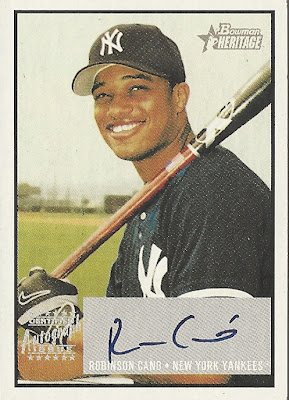 Indeed, I added his 2003 Bowman Heritage rookie autograph to my collection! Technically; I owned this card before the most recent one I picked up at a card show, so this was my 10th different Cano autograph! There's something so simple, yet so elegant about this card. Cano looks like the prototypical rookie, excited and anxious to begin his career. However, he soon showed that he was no average player, and since his rookie campaign in 2005, he's been all but "average". His lifetime batting average is .308, and with 4 Gold Gloves, 4 Silver Sluggers, and about halfway to 3,000 hits; he's well on pace to having a plaque in Cooperstown!

Cano was the first star I got to really watch develop as a player, considering I started watching in 2005. I didn't exactly take it in the way I have today with guys like Mike Trout and Bryce Harper, but I'm proud to say I've grown up during the Cano era, and even prouder to say I have a lot of nice memorabilia to go along with it!

I'm really glad I decided to save for this, rather than buy a ton of cheaper cards. I sold my 2007 Topps Chrome Adrian Peterson blue refractor for $80, which made this purchase a little cheaper. It's a simple card, but it really speaks for the type of player Robby Cano is. Hopefully he'll be flashing his trademark smile while signing a huge extension following the season, with Jay-Z by his side!