Hey guys, Drew back here! It's been an awesome start to the NBA season for my hometown team, the New York Knicks! The season concluded last night, after they took down the Atlanta Hawks to further cement their second seed finish in the Eastern Conference. Carmelo Anthony locked down his first career scoring title, and was a major factor down the stretch in getting NY the 2nd seed, rather than the 3rd or 4th. They will take on the Boston Celtics in Round 1 of the NBA Playoffs on Saturday, and there's no doubt in my mind that I'll be watching! I've never been the biggest of basketball fans, but the recent revival in New York, with the Brooklyn rivalry and now long gone fad "Linsanity" has sparked my interest more than ever. There are a lot of fun players to root for, and I'm excited to see how they will do. 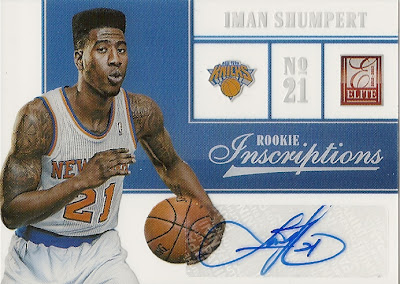 A few weeks ago I picked up this sweet acetate autographed card out of Panini Elite 2012-13 of Iman Shumpert! "Shump" hasn't done anything spectacular in his second season, as most of it has been recovering from his terrible torn ACL he suffered against the Heat in last year's playoffs. He isn't as much of an offensive factor, since NY has several other major scoring options, but his defense is superb when he's fully healthy. He's speedy and quick and can cover the top guards in the game. But best of all, this guy's sporting perhaps the best 'do in all of professional sports right now!

I'd like to wish the Knickerbockers the best of luck this playoff stretch! Hopefully they'll be able to get back to the finals, but it's going to take a lot of hard work before that goal can be reached. I'll definitely be along for the ride though! 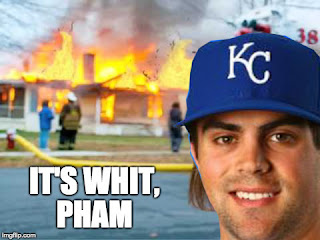