Hey guys, Drew back here! I've had an extremely successful week in the hobby, and I was able to cap it off on a really high note this morning. Before I get to one of my recent through the mail successes; I'd like to share what happened this morning.

Yesterday, my dad ran into a group of women and a 6 year old boy from England who happened to be staying in the area. Although he was only 6, this kid walked around with a binder filled with cards, and my Dad told him about my collection. Later, he told me about the boy, and I gathered a huge box filled with cards to give to him the next day. I've been meaning to clear up some space in my basement, so moving the box would be a win-win in this case. After I left my friend's house this morning, Dad and I met up with them in our town, and I gave the boy the box. It's safe to say I made his weekend; judging by the excitement in his voice and the look on his face. This, my friends, is what the hobby is all about. It felt really good to do this, and I highly recommend to all of you reading that instead of trying to make a profit on everything, to save a little bit in case of a situation like this. Like I said, it really is a win-win. 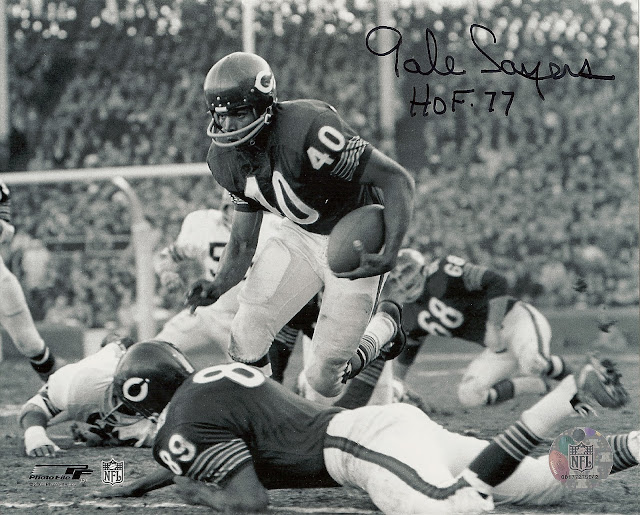 Anyway, the other day I received my 107th TTM success, that being of former Chicago Bears Pro Bowl running back Gale Sayers! Sayers, known as "The Kansas Comet", had a relatively short career, however his dominance while he was there earned him a bust in Canton when all was said and done. Skill wise; he was one of the best backs to ever take the field. He was known for cutting past defenders while never slowing down. His rookie season went down as one of the best in history; as he scored a record 22 touchdowns with over 2,000 all purpose yards. Unfortunately, just a few seasons later he became injury prone, and they forced him to end his career at the age of 28. However; his legacy earned him #22 on the Sporting News' list of the 100 greatest players!

Sayers signed my 8x10 photo beautifully in black; adding his "HOF 77" inscription! I threw in a $10 donation for the autograph, and I'm beyond happy with the result! Thanks Mr. Sayers!