Hey guys, Drew back here! I just did the calculations- 66 days left until my summer vacation begins! Junior year hasn't been a piece of cake; in result I've had to work a lot harder than usual. However; the results have still been quality for me, and I'm proud to say I've done all that and also still made a lot of time for this hobby! Take a look at some of my recent pickups, most of which in exchange for my sales on Check Out My Collectibles: 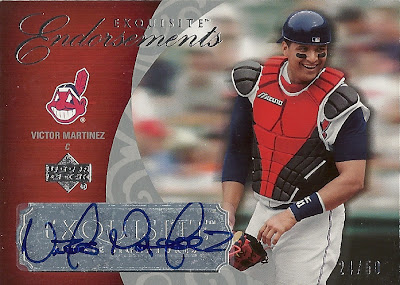 First of all, my friend Mike and I made a 1 for 1 trade, which landed me his Exquisite autograph numbered to 50 of current Tigers DH Victor Martinez! I gave him my National Chicle Hakeem Nicks autograph straight up for the card, so the value was about even. Martinez is up there as one of the more underrated hitters in baseball, and I'm hoping he could have a solid bounce back campaign to make up for his injury plagued 2012 season. 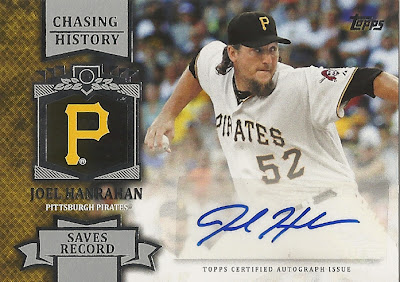 Joel Hanrahan was one of my favorite relievers in the game up until he packed his bags to become a member of the Red Sox. However, I still thought it'd be nice to pick up one of his autographs in his Bucs uni, and I took the one out of 2013 Topps. It's a decent looking card, and I'll probably hang on to it despite his dreadful start to the season. 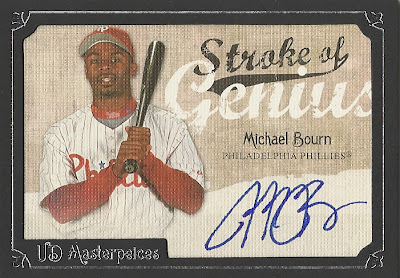 Next, I added this beautiful Masterpieces autograph of Indians speedy center fielder Michael Bourn! Bourn has really made his rounds in the big leagues throughout his 8 years, from Philadelphia to Houston to Atlanta, and now this season, to Cleveland. He's a valuable asset to any team, but I guess those sorts of players get overlooked because of the risk for injury. On another note, Upper Deck, come back, these are way too nice looking. 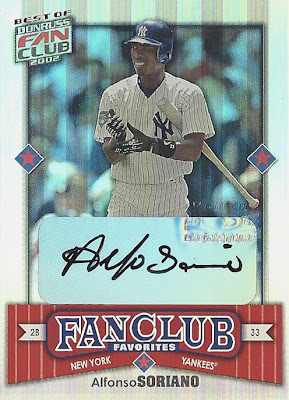 Limited to only 2025 copies was my next pickup, this 2002 Best of Donruss Fan Club Alfonso Soriano autograph, pictured back during his pinstripe days! Soriano had a very underrated 2012 season, although he never really has hit for much of a batting average. It's crazy to imagine if the Yankees never traded him for A-Rod. I've always liked Sori though, and I think he's had a pretty nice career. 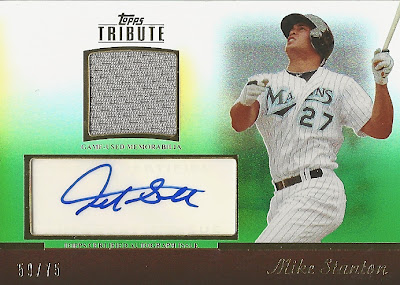 Lastly, how about this incredible 2011 Topps Tribute Giancarlo "Don't Call Me Mike" Stanton autographed relic? I've wanted an autograph of Mr. Stanton for a while now, as he's become one of my favorite players in the league! I wish the Marlins would get rid of him though, because it'd be for the best for both sides. As long as he doesn't go to Boston, I'd be happy. I used $40 of COMC store credit for this one, and I'm hoping my investment will pay off!

What do you guys think? Have a good week everyone! See Ya!
Posted by Drew at 7:37 PM