Hey everyone, Drew back here! It's been just about the toughest week I've had in a long time, and it isn't even over yet. While I finished my midterms today, I have to prepare for the SAT tomorrow. Fortunately, there isn't an enormous amount of pressure considering this is my first crack at it, of the three opportunities you're given. I'm not too worried about it, but the last thing I need right now is another four or five hours of sitting at a desk in complete silence. Anyway, I am ridiculously behind on here. It's January 25th, and I have to show you stuff from exactly one month ago, which is pretty lame on my part. School comes first though, and while I've certainly upgraded my collection tremendously in the past month, I didn't find the time to show it off on here. Well, without any further delay, here's a look at what Dad bought for me this Christmas: 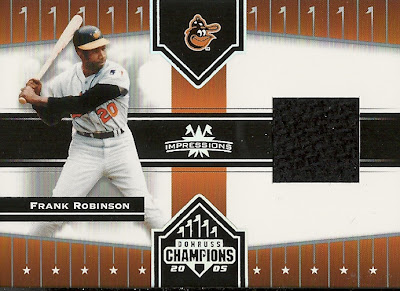 First off was this nice 2005 Donruss Champions Frank Robinson relic! I'm not quite sure what it is, but there is something very appealing about this card. It has a nice, glossy finish on it, and the black relic looks pretty cool. I know a few people who would love this in their collection, however I think I might hang on to it for now. 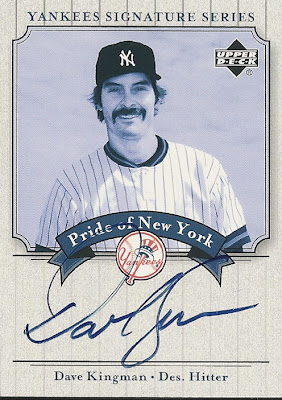 Dad occasionally has mentioned how he really enjoyed watching Dave Kingman, among others, when he was younger. I don't really know a whole lot about him, but I do know he was a great power hitter, and he stopped briefly during his career in New York. From doing a little research, I learned he is one of only a few players in history to play for 4 different teams in 1 season, which he did in 1977. He finished the season with the Yankees, but didn't get to play in October for the soon to be World Series team because he was added to the team past the deadline. 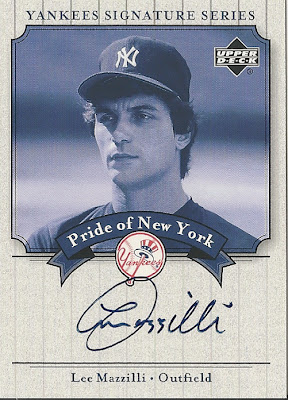 I'm pretty sure I've got two or three of this card now, however, I really do like the 2003 Yankees Signature Series set Upper Deck released. I've considered going for the set, even though there are a few huge roadblocks in the way (Brian Cashman's autograph sells for 3 figures, easily). If anybody wants this one, let me know. It'd be really cool if I could get a different player in the set for it, if anyone is up for that sort of trade! 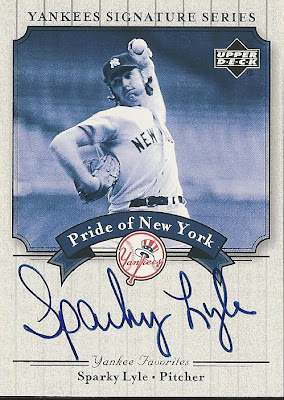 I've been a fan of Sparky Lyle's ever since I read his book, "The Bronx Zoo", a few years ago. I loved how open he was about some of the pranks he pulled! This won't be the last time Sparky is mentioned on this blog in the upcoming weeks (hint, hint)! He's got a real nice autograph, and even though I had a few certified autographs of his already, I didn't have this one yet! 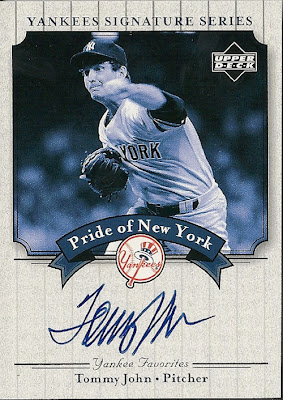 Tommy John was a very good pitcher during his career, maybe not Hall of Fame worthy, but who even knows what that means anymore. I met Mr. John a few years back, and while he was friendly, it still kind of disappointed me how little attention he gave my friend Mike & I. He was signing 8x10s for the company in the midst of his autograph session, maybe because he had to leave early or something. I'm not upset about it, it just kind of lingers with me whenever I think about him.

Those were all real nice, but this one took home the gold medal... 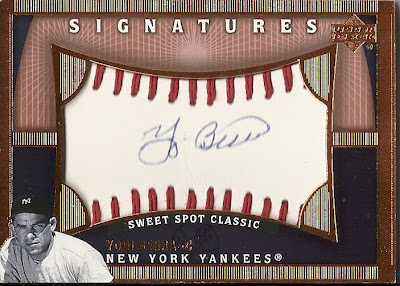 Out of 2005 Upper Deck Sweet Spot Classic, a Yogi Berra autograph! This card scanned terribly, but believe me it looks a heck of a lot better in person. Regardless, this is a beautiful card! Yogi, aside from Jeter, is my favorite living Yankee, so I'm always more than open to welcoming a new autograph of his to my collection! This is my 3rd Berra autograph in my collection, but hopefully I'll be able to add to that one day. It would mean the world if I got a chance to meet him, but that opportunity is looking real slim. The other day when he was honored at the B.A.T. dinner, Yogi didn't sound so good, basically repeating how much he loved baseball in a quiet, raspy voice, until his son Dale took over during the speech. Whether or not I'll ever get to shake his hand is one thing, but all I know for now is that it's smart to get some of his autographs, in case anything happens, because we all know ten years from now his autographs won't be as affordable.

Thank you so much Dad for all of the incredible cards! They'll fit in nicely to my ever growing collection! See Ya!
Posted by Drew at 2:26 PM