Hey guys, Drew back here! I literally just got home from my SAT test, and boy do I feel relieved! It wasn't easy, but even if I didn't fare all that well I still have two more chances to make up for it. Hopefully I won't be taking it for at least a few more months. Anyway, getting back on track, last weekend Dad, my good friend Schuyler, and I took the trip down to the Westchester County Center for our first card show since August! As most of you know, my collection thrives off of many great sources, but none can reach the amount of opportunities that JP's Sports & Rock Solid Promotions have provided me over the years! However, none of those shows brought anticipation quite like this one. But before I get to who I met, let me show you all the few cards I added at the show: 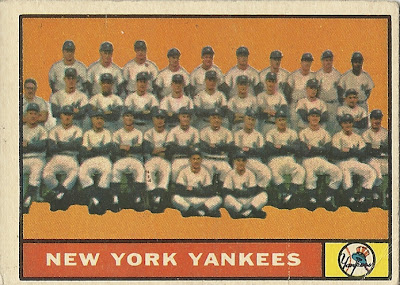 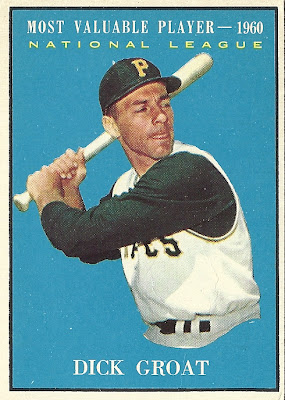 Dad bought me two cards towards my 1961 Topps set, the above Yankees team card and the Dick Groat MVP card! Any bit helps, as we approach the half way point of the entire set. I've been considering dropping the high numbers and just finishing the regular set, and worrying about the high numbers at a later time. The older sets are a lot of fun to work on, but the high numbers really seem to drag them out, especially when you're dropping $20 plus on cards of Rollie Sheldon and Ron Perranoski, for example. The Yankee team card is beaten up a bit, but it's definitely one of the cooler cards from the 60's considering how great they were in the 1961 season! They were certainly one of the best teams to ever take the field! 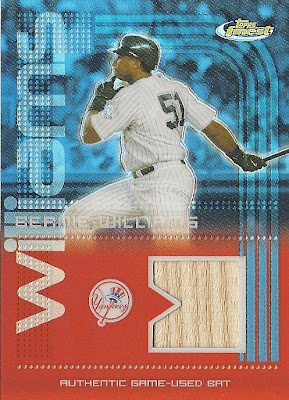 I find it pretty funny that of the money I put towards cards, all of it (with the exception of one card) were bought off of my good friends Rich and Hunter! They put out a nice affordable bargain bin, with prices half off on all of the cards, which are mainly relics and autographs from the mid 2000's. I feel like it's almost obligatory to buy a few Yankee relics once in a while, and I certainly did so at this show, without even realizing it. This Bernie Williams bat card was just something I couldn't pass up. I don't think I have enough of Bernie's in my collection, but then again, I don't think many people do, as he was one of the most underrated players of his era! 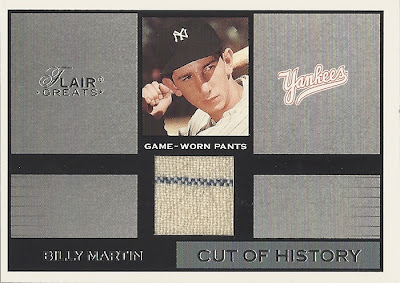 Billy Martin was another one of the Yankee's more underrated members. He wasn't the best of players, however he did outplay Jackie Robinson in the 1952 World Series, which has to say something. Through his life he was a gritty, tough-as-nails type of guy, but most of all, he really seemed to love the game of baseball. This is my first relic of his, back from his playing days with a beautiful pinstripe right across it. For 10 bucks, I couldn't pass it up. 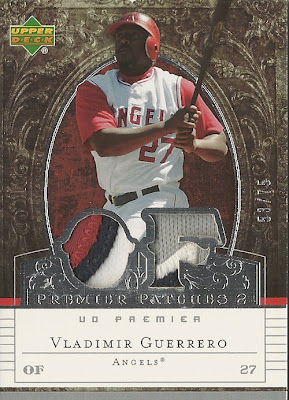 I guess I really was sympathetic towards the underrated players last Saturday, considering I also picked up this beautiful dual patch of Vladimir Guerrero! Patches still intrigue me, which is sort of strange considering lately I've really ventured away from relics. There's just something so cool about a nice low numbered three color patch of one of baseball's quietest but most dangerous sluggers in history! I really enjoyed watching Vladdy play; chasing pitches in the dirt and still knocking them out of the ballpark. With the way prospects are being brought up today, I think it'll be a while before we see another player like Vlad. 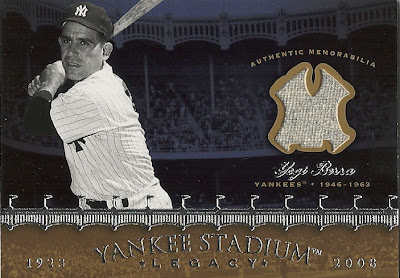 The final card I bought at this month's show was this beautiful Yankee Stadium Legacy relic of who else but Yogi Berra! Two posts in a row topped off with a beautiful card of Yogi is something I know most collectors would be more than happy to do. Come on now, I know most of you hate the Yankees; but there's something seriously wrong if you don't like Yogi. I've been trying to expand my Berra collection a lot lately, taking advantage of any nice prices I see. Patches and wool swatches seem to really get my collecting gears on, and boy did they kick off what ended up being an incredible day!

Over the next few days, you'll see just what made this show experience above and beyond all the past shows we've been to! Thanks Dad for the 61 help, and to the rest of you, See Ya!
Posted by Drew at 3:12 PM