Hey guys, Drew back here! So, continuing on the series, here is Part 3, which features all of the relics we purchased between Dad & I at the show! Check it out:


PART 3: Relic Additions
This is where the show began to get out of control for us, as we picked up a ton of nice new cards to add to the collection! We'll start with all the jerseys, including our Tier One set additions, and then work our way to the autos. Lets get started! 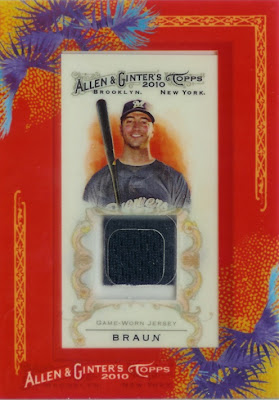 We lead off with a 2010 Allen & Ginter relic of the reigning NL MVP, and possible PED-user Ryan Braun. Braun was starting to go up the ranks on my favorite non-Yankee player list, but I think he's starting to creep back downhill a bit. I think for the sake of baseball he should give the trophy back, whether he is truly guilty or innocent. It would show a lot of class for him to admit himself being wrong. Why should he worry about giving it back though? If he really thinks he didn't use PED's and he just had a great season, he might as well go back out and try to win another MVP award next season! Anyways, I got this card for free from a vendor because I bought two fairly expensive autos from him, and I liked the color of the swatch more than anything else on the card. 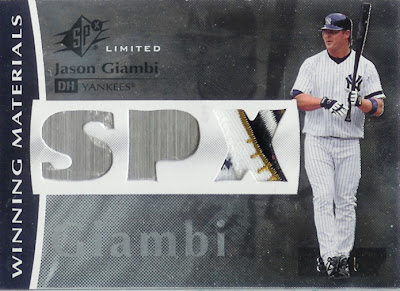 Speaking of PED's, here's a Jason Giambi patch card numbered to 45 from 2008 UD SPX! I've never really been a big Giambi fan, mainly because when I was getting into baseball, he was on his way out of baseball. Also, I got into the sport not much before the Mitchell Report and the Steroid Saga was underway, so it didn't give me a whole lot of reason to like him. But, like A-Rod, I dealt with him being in the Yankee lineup. I got this card only because the patch is just awesome all around! I see 3 different colors on the patch and a neat design, as well as a pinstripe sneaking onto the card in the corner of the swatch! Pretty neat for sure! 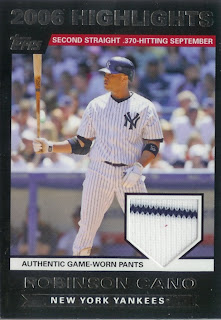 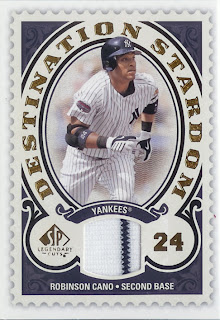 These two Robinson Cano relics kind of went hand in hand for me, as Dad got them for me from the same vendor as a lot. The vendor I bought these from is definitely one of my favorites at the show, and he's there every time working at the same table as Hunter, another one of my favorite vendors at the show who I've mentioned before. Anyways, I needed both of these 2007 Topps Highlights jersey and 2009 Legendary Cuts jersey cards for my Cano PC, and it's even cooler to see that they both have pinstripes! 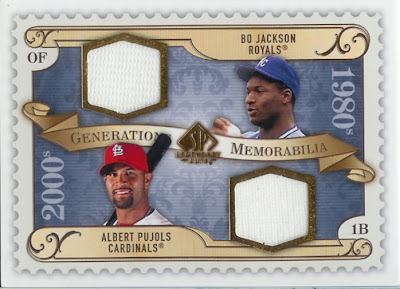 Next was a pretty sweet dual relic from again, 2009 UD SP Legendary Cuts! This card features jersey swatches from both Bo Jackson and Albert Pujols. I don't really see the connection between the two, but I like both of them a lot so it's pretty cool for sure. I'm not a fan of the Pujols signing in LA but I still have respect for him because if he hasn't done steroids or PED's, he's one of the best players of all time. 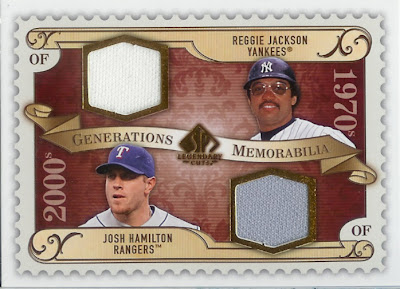 Along with the Pujols/Jackson card was another sweet dual relic of two of my favorites, Reggie Jackson and Josh Hamilton! Both of them reside in my Secondary Collections group, and it's only fitting that I would eventually add this one to the collection!


The final three relics I was able to add to my collection last Sunday were needed for my Topps Tier One relic set I'm working on! Going into the show I had 5 cards total from the 50 card set, along with 3 that were incoming from trades and eBay. As well as the incoming pickups, Dad was able to help me add 3 more at the show! 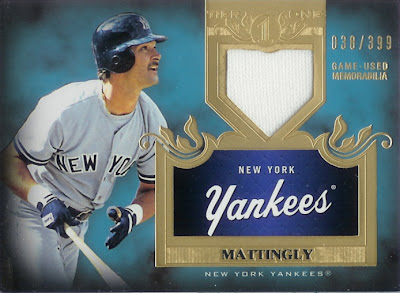 The first relic was of one of my PC players, Don Mattingly! This card is absolutely awesome, with a nice crisp photo and a solid overall design. The Yankees are pretty well represented in this set, with Babe Ruth; Lou Gehrig; Joe DiMaggio; Mickey Mantle; Reggie Jackson; Thurman Munson; Mattingly; and Paul O'Neill. One of the main reasons why I decided to collect this set was because there were a lot of Yankees relics I needed to add that were included! I've already got plenty of Mattingly but I can never get enough of one of the top players in all of baseball in the 1980's! 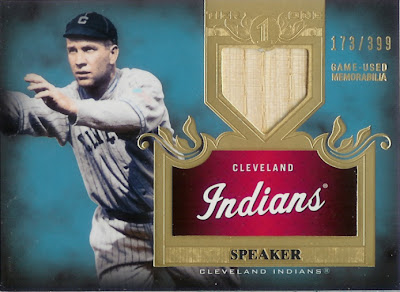 Card #2 just so happened to be a bat relic of one of baseball's most legendary hitters, in Tris Speaker. Tris is very often overlooked by some of the heroes in the game from his time period (1907-1928), such as Cobb; Wagner; Ruth; and a young Jimmie Foxx, but he was by far one of the best hitters to ever pick up a bat. He retired in 1928 with a lifetime batting average of .345 and 3,514 hits. When he retired, only Cobb had more hits than him, and to this day he still ranks 5th all time. To now own a piece of his bat is something special, even if its just a small part of what he used to get himself to an elite level of baseball skill. 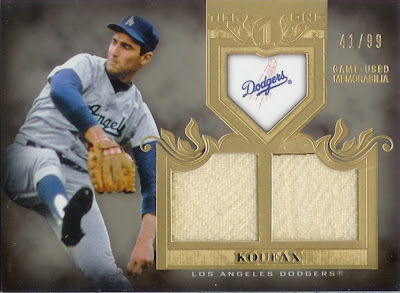 As dominant as Speaker was for all of those years, the best relic we were able to pick up was of Dodgers legendary lefty, Sandy Koufax. This is the dual relic version, numbered 41/99. Sandy is a rarity in today's hobby, but thanks to his contract signing with Topps over the past year, collectors all around the world have been able to add his autograph and memorabilia to their collections! Koufax doesn't have the raw career stats that would put most pitchers in the Hall of Fame, but his level of dominance in about a 5 year span was great enough to put him in Cooperstown with ease. Being able to own a part of his jersey is unreal, and I'm really grateful for my dad to be able to help add cards like these to my collection!
Thanks again Dad for all of the awesome cards you got for me! The autos will be on the next post, and following that will be able 2-3 more posts until I complete the in-depth recap of one of the best shows I've ever been to!
See Ya!
Posted by Drew at 3:00 PM