Hey guys, Drew back here. Today, the Yankees' beat writer Sweeny Murti revealed some big news, in that former Yankees staple behind the plate and current free agent Jorge Posada is set to announce his retirement within the next 2 weeks. While the future is definitely set catching wise for the Yankees, with Russell Martin and many top of the line prospects like Montero and Romine, it's definitely a sad day for Yankees fans worldwide. I've grown up watching the "Core 4", consisting Jeter; Rivera; Posada; and Pettitte; as well as the other stars that surrounded them through their World Series run in the late 90's. Of course, having been born in the mid-90's, I was too young to see the dominant Yankees dynasty, but I at least got to see the 2009 championship as a diehard fan.

Posada never quite stood out as a clear favorite of mine, but it wasn't until last year that I realized how important he truly was to the Yankees franchise. Not only was he a standout offensive player for many years, but he also caught a majority of the games and was one of the best offensive catchers in baseball history. Through the history of the game there have been many top tier catchers: Berra; Bench; Campanella; Fisk; Carter; Rodriguez; Piazza, and the reason to their success was because they were aggressive players who battled through innings behind the  plate; called a great game; but also could hit! Posada may not belong in the first group of catchers, but he's very close. Whether he makes the Hall of Fame one day is a question that not many people could answer right now, but he will definitely draw consideration. He will retire with a lifetime batting average of .273, 275 Home Runs, and 1,664 Hits. His best season in my opinion was 2003, when he finished 3rd in AL MVP voting after posting a .281 average with 30 home runs and 101 RBI's. That is a great season for a catcher! He also made 5 All Star Teams, won 5 Silver Sluggers, and of course won 4 World Series championships!

Unfortunately, he went out on a bit of a rough note. Last season, he clearly showed signs of wearing down, batting only .235 with 14 home runs in 115 games. However, he came through in the clutch, especially on September 21st, when my dad, best friend, grandpa, and I went to the second game of a doubleheader, that was a make up game from August we finally got to see. The Yankees already clinched playoff berth in the first game of the doubleheader against Tampa Bay, and with a win in the next game, they would have the division pretty much wrapped up. The Rays took a lead late in the game, but the Yanks battled back and got some runners on base for Posada, who pinch hit for Jesus Montero in the 8th inning. Jorge delivered big with a pinch hit 2 RBI double that scored the go ahead runs! The Yankees went on to win 4-2, and clinched the division with the win! I'll never forget how pumped we all were and how memorable the game was. I guess it was a nice way for his career to end on.


Who knows what the future has in store for Posada. A lot of people have said he would make a great manager one day, and I would personally agree. Many former catchers have had a high amount of success managing teams, I think because they get such a good taste of it when they are trying to manage their pitching staff and call a solid game. He is a very smart and wise man and I think he's going to do something else in baseball, besides for being a fan-favorite at Yankees Old Timer's Games in the future!

I know I'm speaking for a majority of Yankees fans, and even a good percentage of baseball fans when I say that we're going to miss you, Jorge! Thank you for all the unbelievable memories you've left behind, and for the legacy that I can carry on to my family one day, for the most clutch hit I may ever witness in person.

We'll miss you Jorge. Thanks again. 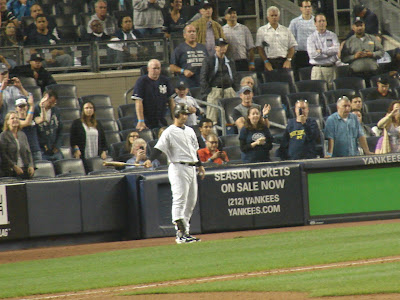